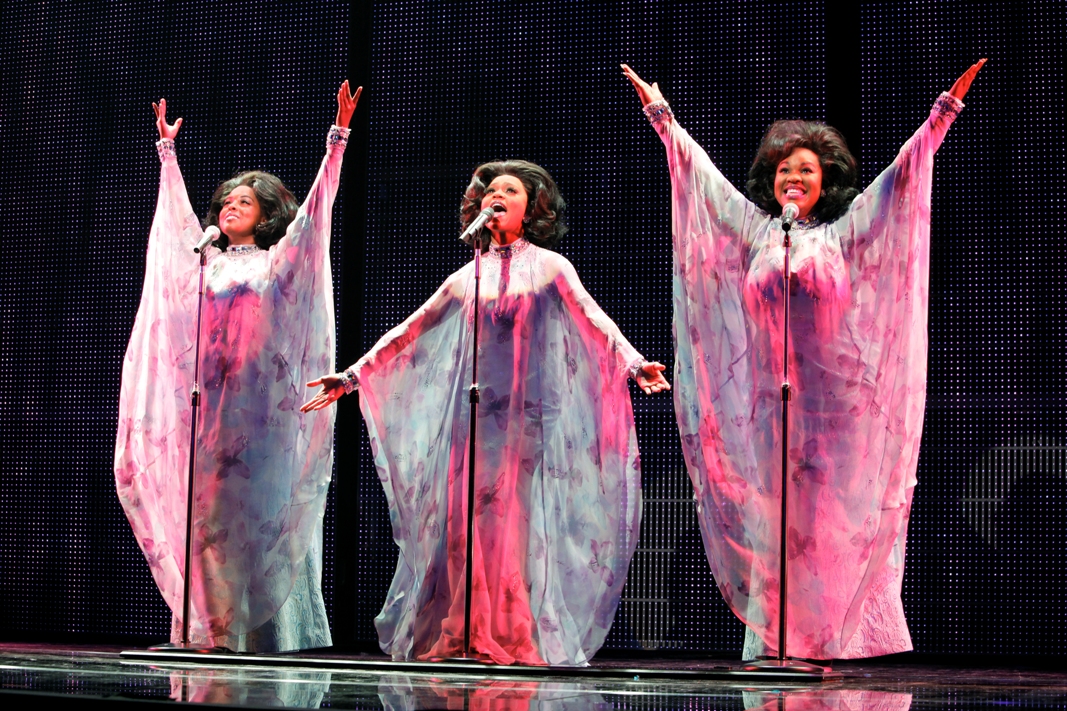 The steep price of fame and fortune is at the center of Dreamgirls, playing through Sunday at the Adrienne Arsht Center in Miami.

The original production of Dreamgirls was directed and choreographed by Michael Bennett’ and opened on Broadway in 1981, running for more than 1,500 performances.’ It won six Tony Awards, and was translated to film in 2006, winning two Academy Awards.

Much of the plot of Dreamgirls unofficially parallels the story of the Supremes.’ The story spans 13 years, beginning in 1962, when the Dreamettes, Deena (Syesha Mercado), Lorrell (Adrienne Warren) and Effie (Moya Angela), are young hopefuls trying to make it big. They fall under the spell of a smooth-talking agent Curtis (Chaz Lamar Shepherd) who gets them a job as the back-up group for soul singer Jinmmy ‘Thunder’ Early (Chester Gregory). But love and friendships are tested when Curtis reinvents the group as the Dreams, pushing full-voiced Effie to the sidelines and pulling svelte Deena out front to lead the group.

This new production of Dreamgirls debuted last year at the Apollo Theatre in Harlem, the setting for the opening scene. One of the songs written for the movie version, Listen, has been incorporated into this stage version as an empowering second act duet between Deena and Effie.

While the costumes are still gloriously ornate and over the top, in this updated, stripped-down version of Dreamgirls, lighting and projections take the place of scenery and set pieces. The result is alternately dazzling and dizzying, although there were some distracting technical glitches on opening night, with one panel not in sync with the others.

Some moments from musicals become more legendary than the musical itself, and that’s the case with the song And I’m Telling You I’m Not Going. In the moments leading up to the song on opening night, the audience was already applauding, cheering and screaming in anticipation. As Effie White is being fired from the group she helped found and lead, a decision made by the man she loves, she sings the song, an attempt to both retain her place in the group and not be left behind by her lover. Made famous on Broadway by Jennifer Holliday, who won a Tony Award for playing Effie, and in the film by Jennifer Hudson, who won an Oscar for the role, Moya Angela has some big shoes. Her performance lives up to legend, yet she also makes the song her own, delivering a rendition so impassioned and desperate it’s almost difficult to watch. Angela is dynamic, charismatic, and that song is only one of the star-is-born moments she has over the course of the show.

The best moments in Dreamgirls belong to Moya and Chester Gregory, whose Jimmy boasts Little Richard’s scream and pompadour and James Brown’s raw sexuality. Gregory is a delight in every scene, whether he’s trying to placate longtime girlfriend Lorrell or trying suppress his innate soulfulness to satisfy a white audience.’ Gregory is so good he manages to gain respect and sympathy for this womanizing cad of a character.

The rest of the cast is terrific. Shepherd brings dimension to Curtis, the stereotypical greedy manager, Warren’s Lorrell shows off her pipes in her second act moment in the spotlight, and Mercado, as Deena, is at her finest when in her moment of transformation from girl to woman.

Dreamgirls is irresistible, a behind-the-scenes story wrapped up in a glittery package full of razzle-dazzle. It’s a must-see for any musical theatre fan.