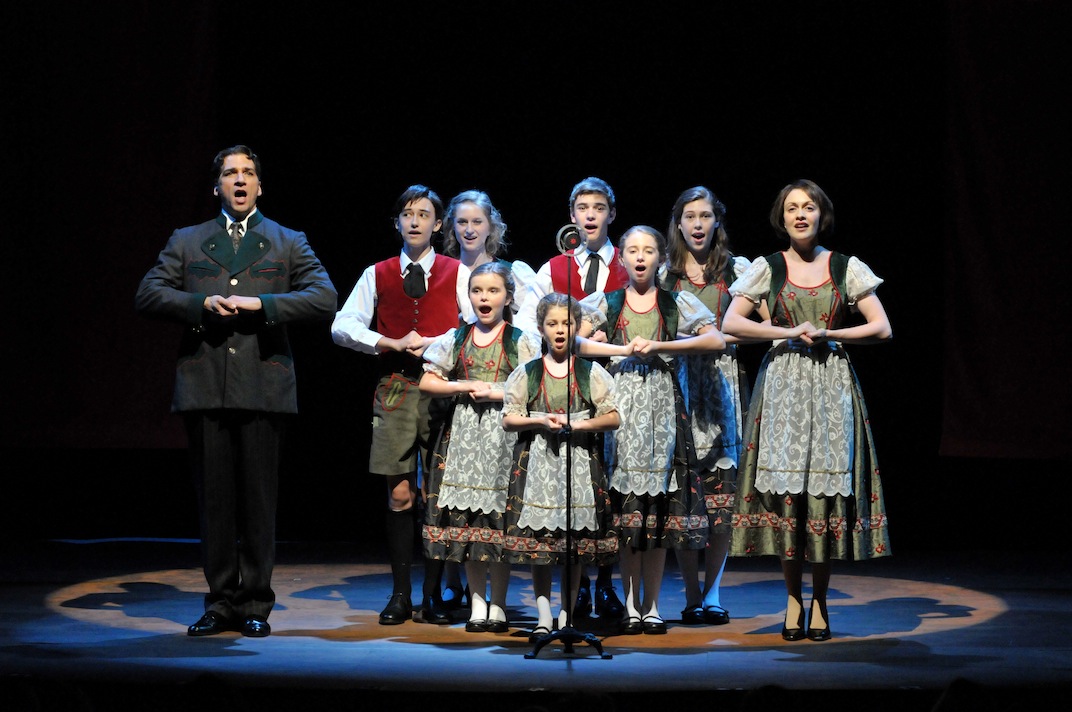 Put away the insulin.

The Maltz Jupiter Theatre’s production of The Sound of Music may have a few flaws, but cloying schmaltz isn’t one of them.

Instead, the classic gets a musically resplendent production that respects the difference between genuine sentiment and manipulative sentimentality.

The production, seen Thursday, is headed by director Marc Robin and musical director Aaron McAllister and reminds us why the show has lasted a half-century: Richard Rodgers’ soaring score, Oscar Hammerstein II’s powerfully simple lyrics and a skillful script by Howard Lindsay and Russel Crouse.

It also provides, of course, the plum role of Maria for some lucky actress. Here, Catherine Walker repays the creators with a voice that trills without seeming artificial and trumpets without sounding brassy.

The Maltz staff is canny about programming its subscription seasons. Since the lineup this fall included a new musical most patrons had never heard of, it’s understandable that they balanced Academy with as popular and safe a commodity as they could find.

But as with most of R&H’s canon, memory is often polluted by the homogenized film versions. In the original, every perky Do Re Mi is counterbalanced by a sardonic How Can Love Survive. When done really well, there is a yin-and-yang balancing of the tribute to the power of love with the encroaching specter of fascism.

While this production mentions all that, plus the power of God, it’s not as dramatically satisfying as it is might be, with one huge and crucial exception.

For half of the first act, there’s serious cause to worry. Robin directed the actors to an overbroad musical comedy style that maximizes the laughs and undercuts the human element. Several characters mimed every action they sang about until you wished the stage manager had issued handcuffs. Really, the Mother Abbess fluttered her fingers like snowflakes when describing one of her favorite things falling on her nose and eyelashes.

But when Maria pleads for the Captain to show affection to his children and the kids’ singing tears away their father’s barnacled defenses, the show finally finds the emotional core it lacked for a half-hour, with hardly a dry eye in the house. From that pivot point on, this becomes the touching evening it was meant to be.

Still, this edition’s real strength is the musical performances. People only familiar with the film’s helicopter opening have to be overwhelmed by the curtain-raiser here: a magnificent and intricately arranged wall of pure music as a choir of nuns sing vespers.

It’s indicative of the rest of the show: strong singers backed by a skilled ten-piece pit band whose two synthesizers sound like a full orchestra. Robin and McAllister also encouraged their cast to ignore conventional phrasing and rounded tones to get at the underlying emotion. When the Captain sings Edelweiss, his voice is appropriately constrained by the imminent loss of his homeland.

No one here is better at this than Walker. With just an extra inflection sprinkled here and there, she makes the music and lyrics sound fresh. She also refuses to copy her famed predecessors, although you can hear echoes of another of Walker’s credits, Mary Poppins. The deadpan British nanny must have rubbed off on her because this Maria doesn’t star off quite as breathless and dewy-eyed, which does shorten her arc of maturation during the play.

Most of the adult cast is from out of town, in part because this is a co-production with the Fulton Theatre in Pennsylvania where Robin is artistic director. But most of the kids are local.

Michael Sharon has a warm baritone, but he’s not terribly convincing as the uptight martinet of a father. Surprisingly, contrary to most productions, Sharon becomes more believable during and after his emotional resurrection.

April Woodall as the Abbess has the vocal chops for Climb Every Mountain, although sometimes, for dramatic emphasis, she let the power ebb just when it should have swelled.

Elisa Van Duyne was both physically and vocally gorgeous as the Baroness. Randall Frizado as the entrepreneur Max had the weakest voice and Robin stuck him with conventional musical comedy shtick.

The kids were appropriately appealing without being overly twee: Riley Anthony, Colleen Broome, Skye A. Friedman, Jose Kropp, Emily E. Rynasko, Molli Sramowicz and Jenny Piersol who hasn’t been sixteen going on seventeen for some time.

Michael Schweikart’s lovely sets are evocatively lit by Paul Black, from the palatial Von Trapp estate to the arched abbey with its lattice work and stained glass windows. It’s rare anyone waxes rhapsodically about a backdrop, but the majestic vista of the Austrian mountains and a sylvan glade below, changing colors with the time of day, is nearly worth a round of applause.

The cold truth is that there have been more moving, dramatically truthful productions, but the glorious music adeptly delivered by talented artists make this production worth the visit.