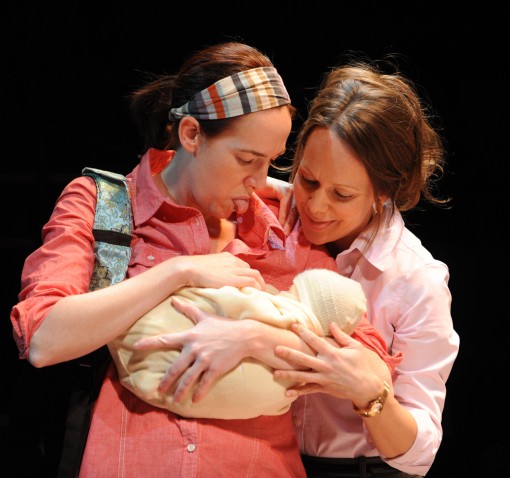 There was a takeaway moment in the mostly’ comic first act of Florida Stage’s’Goldie, Max & Milk on Friday in which a frazzled single mother, overwhelmed by the challenge of her crying newborn, calls out reflexively in pain and terror, ‘When do I get to nurse? Who holds me?’

It’s a chilling glimpse among many hilarious and frightening beats in the half-comedy, half-drama about the transformative glories of motherhood and the ensuing love for a child.

The pitch premise may echo mid-career Neil Simon: the collision of a lesbian having trouble making breast milk for her infant, a judgmental Orthodox Jewish lactation coach, a faithless ex-lover, the coach’s teenager struggling with her sexuality and an affable drug dealer as the joker mixing up the deck.

But Karen Hartman’s world premiere digs far deeper into issues such as second chances, the true definition of unconditional love and the nature of family values.

Her story opens as Maxine (Erin Joy Schmidt), an indigent lesbian suffused with New Age ideas, sits exhausted and terrified in her dilapidated Brooklyn home with her infant daughter in arms. Max is bright, idealistic, passionate and suddenly aware how way over her head she is. But the birth has brought her the reality of the unique joy of motherhood.

‘I don’t believe in God,’ she says, having seen her father die. ‘But this is objective. I believe in the soul. I have seen it go out. I have seen it come in. When I hold her, I am cradling a human soul. She doesn’t even know I’m separate from her. Can you imagine?’

The child is the result of artificial insemination at the urging of her lover, Lisa (Carla Harting) who had a heterosexual affair during the pregnancy and is now estranged. Lisa, who now has a successful corporate job, suddenly wants a role in the child’s life and threatens legal action.

With no support system or funds, Max brings in the social worker Goldie (Deborah L. Sherman) to counsel her on lactating, even though the Orthodox Goldie strongly disapproves of Max’s”lifestyle choice.”Eventually, Goldie’s oldest daughter Shayna (Sarah Lord) visits to peek at a ‘real’ lesbian because she secretly wrestles with similar feelings. A few twists turn what was a volatile situation into pure chaos.

Hartman skillfully creates a sturdy architecture for the evening and peoples it with delightfully quirky complex characters who teeter close to Cartoonland, but never fall over the edge. But it’s her language and the ideas she investigates that elevate the work to the level of something well worth seeing.

The no-nonsense Goldie–simultaneously tough, warm, nurturing and homophobic’disdains that Max has named her child Lakshmi Rose.

Hartman has Goldie say, ‘You give your child a ridiculous name to express yourself? A child is not an expression of yourself. A child is a separate human person with the breath of God. I work at my marriage. I work for my family. You think it’s a science project, mix it up in a cup and see what you get?’

Without ever spelling it out, Hartman uses milk as a metaphor that goes beyond nourishment for the child’s body. It is the nourishment of love, acceptance and newfound maturity for the soul of its mother and the untraditional extended family that evolves to support her.

Shayna’s exploration of her sexuality and Goldie’s initial rejection of her feels just a shade like padding laid on top of the main story. But it gives Max the ability to illustrate her growing mantle of motherhood turning her into a mature healer for the troubled adults around her.

The sole quibble is that the penultimate scene has a whiff of a playwright reconciling all the relationships, like Tetris blocks being quickly maneuvered into place. It’s probably inescapable since the play wants and needs to find a peaceful, satisfying rearrangement of pieces that have been thrown into the air.

Hartman is a mid-career playwright who Broadway audiences have never heard of but who has a well-earned reputation among fellow playwrights and devotees of off-Broadway and regional theaters. Goldie still needs a tad of fine-tuning, but it’s far more polished than a lot of world premieres due to Hartman’s experience plus readings since 2007 including one last March at Florida Stage’s 1st Stage program.

It takes nothing away from the quality of Hartman’s script to say that she is blessed here with the direction of Margaret L. Ledford and a cast who clothe her craft with an extra layer of life. The actors bring a passion to its execution on stage that make you empathize with the characters even as you laugh at their silliness.

There are many moments where Hartman, Ledford and the actors create goosebumps. Goldie is cradling Shayna who is afraid to tell her about her sexuality. The daughter says in agony that her mother doesn’t know her. Goldie responds, ‘What couldn’t I know, huh? About you?’ She touches the girl’s face. ‘I know the freckles you can’t even see.’

Schmidt, who was brilliant in Fifty Words this year, convincingly charts the arc from a helpless quivering mass with a quavering whine to a sane, confident woman who finds that her selfless love of the child helps her come into her own adulthood.

Sherman, who was the tough lesbian in No Exit this year, smoothly meshes all of Goldie’s conflicting and conflicted qualities in yet another skilled performance. Hemphill, Lord and Harting, as well, bring an extra dimension to their characters.

This is the first intimate drama that Florida Stage has produced in its new space at the Rinker Playhouse inside the Kravis Center and the first serious challenge whether it can create the connection it had in its smaller theater. While the three-quarter thrust stage here will never have the cozy feel of Manalapan, Ledford’s staging shows that the space can work, although sometimes characters in the same room seemed to be calling across a cavernous living room.

Goldie, Max & Milk still could use a little clarifying in a scene here or there, but overall, audiences will leave feeling they have been embraced with a maternal warmth.