Intriguing “Ghost-Writer” has only shadowy success at Florida Stage 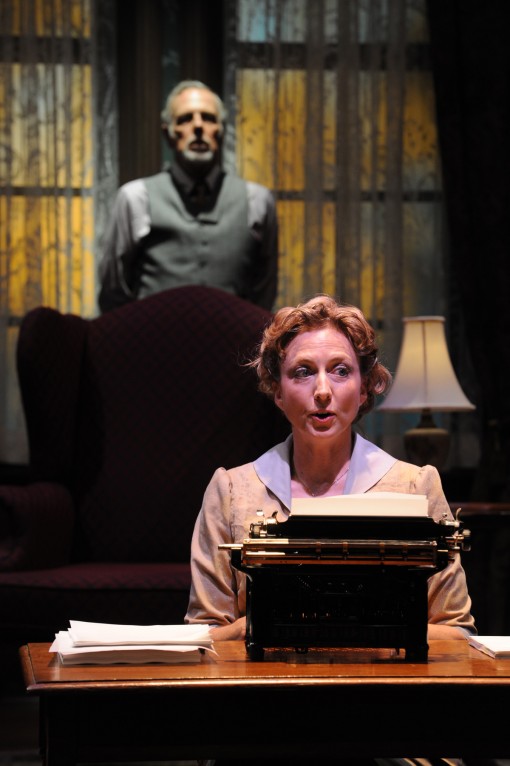 Michael Hollinger’s Ghost-Writer, which opened at Florida Stage Friday, delves into the link between creativity and human relationships. In 1919, a secretary claims that a dead novelist continues to dictate the end of his masterpiece to her, the true love of his life.

Ghost-Writer is what would result if Henry James had written an episode of the Twilight Zone after he had read one too many Victorian romances. This device actually works in the written script and might in another production, but it’s only half-successful under Louis Tyrrell’s direction.

Florida Stage is virtually incapable of producing subpar work, but developing new works is bound to result in some productions that are less compelling than others. This play is intriguing, even thought-provoking, but there’s nothing compelling or enthralling on stage other than the ideas in Hollinger’s script. The sexual chemistry that is essential between the two main characters, repressed as they might be, is sadly nonexistent.

The play opens in the stiff-collar world of New York City in the spare but tastefully appointed study of Franklin Woolsey (J. Fred Shiffman).

Woolsey died several weeks before the action starts, but Myra (Kate Eastwood Norris), a secretary who typed his dictated prose, is still sitting before her typewriter ‘ waiting. She’s waiting for the latest unscheduled installment of dictation from her dead employer, supposedly trying to finish his masterpiece from beyond the grave. Myra is no believer in the paranormal and she is as bewildered as anyone how she, not a writer, is continuing to complete Woolsey’s novel.

Woolsey wife, Vivian, (Lourelene Snedeker) has sent an emissary to the study to determine whether Myra’s work is a fraud in progress, a suspicion aggravated by her certainty that her husband had a closer relationship with Myra than with herself.

Myra tries to explain the strange phenomenon to the emissary and reveals in flashbacks how an unconsummated affair grew between she and Woolsey in an emotional and spiritual collaboration that was integral and yet went beyond their work.

Eliciting shivers from eerie goings on is not Hollinger’s goal unless it’s shivers of emotional resonance. The ghostly aspect is only Hollinger’s mechanism for raising stimulating questions that he never answers. Is creativity someone whispering in your ear (as in Steven Spielberg’s Always)? Is Myra really in touch with his spirit in the afterlife? Was she simply so attuned to his soul in life that she unconsciously recreates his style in death? ‘Is she simply deluding herself so that she can maintain the relationship with someone now gone?

She says, ‘What is a ghost, in any case, but a vivid memory, visiting when one least expects it? ‘And aren’t we all subject to haunting?’

Hollinger, who wrote about artistry and talent in 2006’s Opus, also pays tribute to the alchemy of artistic creation with a dozen wonderful aphorisms and verbal metaphors. At one point, Vivian complains, ‘Even if he is right in front of you, nodding, ‘Yes, of course, dear,’ you can see that behind the eyes he is constantly turning a phrase — like a workman operating a lathe.’

Myra later says she sees their relationship reflected in what Woolsey originally dictated. ‘The writer required a fiction to reveal the essence of their story; only by changing the facts was he able to make it truer than what actually happened. Which is the only truth that matters.’

The main weakness is Shiffman’s creation under Tyrrell’s direction. While his performance is technically proficient, his Woolsey is not a repressed spirit yearning to break free, but instead a gray, drab, humorless man.

This gives Myra little to credibly pursue as an object of desire, little emotional heft for Norris to play off of and very little to drive the second half of the play. We need a Rex Harrison, a Clifton Webb, a Vincent Price in his early career. Other than Woolsey touching Myra’s bare forearm a couple of times as she types and an intentionally awkward dance lesson, we don’t see much going on between them. What is left on stage ‘ and this was no one’s aim ‘ is a watered down D.H. Lawrence tale of banked passion and a tragically missed opportunity, a well-written Harlequin romance.

Norris’s Myra is pleasant enough company for the 80-minute play and she delivers droll witticisms with a hint of playfulness.

But she too is so tamped down that we have to really work at connecting with her. (Spoiler alert!) Only when finishes types the last paragraphs of the manuscript — and thereby ends the relationship ‘ does Norris finally shows us passion as relief, release, fear, ecstasy, grief and loss all wash over her face.

The always dependable Snedeker isn’t called on to do much. But she has the best moment in the script which she executes perfectly, although Tyrrell’s pacing doesn’t even allow it a moment to sink in. Vivian envies Myra’s relationship with the husband who may never have really loved Vivian, but whom she genuinely loved. Smack in the midst of unrelieved scoffing at Myra’s claim, Vivian asks desperately, ‘Has he mentioned me?’