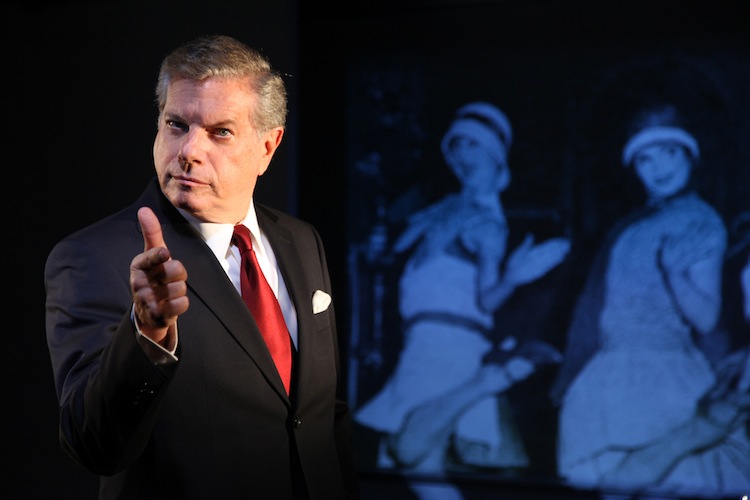 While Meyer Lansky may not have become a household name like Al Capone or “Lucky” Luciano, the Jewish-American mobster is consistently ranked as one of the Top 10 gangsters of all time.

Yet if you listen to his side of it, as told in the bio-play Lansky, currently playing at the Aventura Arts And Cultural Center Stage, Lansky was simply a guy who wanted a life better than the one his father sweat and toiled through.’ “America is a brothel. Anything can be bought,” Lansky proclaims.

Mike Burstyn plays Lansky in this one-man show with an easy flow, presenting him as a buddy that you wouldn’t mind sitting down and having a sandwich with at Wolfie’s. That was, in fact, Lansky’s favorite place in Miami Beach for pastrami.

Born Majer Suchowlinski, the organized crime boss gained fame as the “Mob’s Accountant,” was founder of one of the most feared gangs during Prohibition, and is credited as being one of the kingpins in the development of the Mafia in the United States.’Lansky’s pursuit of the American dream found him at the forefront of bootlegging, and as the kingpin of a gambling empire in Las Vegas, Miami and Cuba.

When we first meet the self-proclaimed businessman, he’s in a celebratory mood in a restaurant in Tel Aviv. He’s arrived from his condo in Miami Beach, he says, to return to his homeland (although history documents that he was actually trying to escape federal tax evasion charges).

Lansky is waiting for the telephone call that will inform him he has regained his Israeli citizenship through the “law of return,” whereby those of Jewish ancestry have the right to migrate and to settle in Israel. In the play, the restaurant has welcomed him with open arms, but as the 75 minutes of the show tick on, the audience learns that Israel won’t be so giving.

This tableau of Lansky’s life paints a picture, from his boyhood in Grodno, Russia, to his father moving the family to a “new promised land.” It is here on New York’s Lower East Side where Lansky would meet up with the boyhood friends that would shape his future, Charles “Lucky” Luciano, and Benny “Bugsy” Siegel.”

Painted and photographic projections on three screens behind Lansky create a backdrop as he recalls stories of his younger days in Poland perched on an armchair by his Zayde (Yiddish for grandfather) to the day his father disowned him on Delancey Street when he was 19 (“he ripped off his shirt and covered mirrors. From that day until he died, I was dead to him”).

Burstyn commands the stage, never missing a beat, bringing other characters into the fold as he comfortably moves back and forth with two-person dialogues. He affects a booming voice as Zayde telling strong stories of the old country. Then he converses with his father, who Lansky describes as a weak, timid man. Burstyn never turns him into a caricature, but presents an honest portrayal of the humble Jew who vehemently disagrees with his son’s choices. Although he is the lone actor portraying all the various characters, Burstyn’s nuances give the illusion that there are plenty of others from which to learn more about Lansky.

Inspired by Robert A. Rockaway’s book, But He Was Good To His Mother, playwrights Richard Krevolin and Joseph Bologna (yes, the actor Joseph Bologna, who also directed Lansky), present a well-rounded portrait of the man, a charming entrepreneur who had a talent with numbers and is always the life of the party. He cracks jokes, calling Richard Milhous Nixon a “putz,” and counts Golda Meier among his closest friends.

It isn’t until the end of the play that we begin to see Lansky’s sense of order unravel. He addresses the audience in the same voice in which the mobster probably ordered a hit. “I never had blood on my own hands,” he says. “Do you want me to confess? Is that what you want me to do? Go on get out of here,” he yells at the audience.

Meyer Lansky may not have been as colorful as Capone or Bugsy, but Burstyn’s Lansky has chutzpah. This is an opportunity that shouldn’t be missed to spend some time learning about one of history’s lesser-known wiseguys.