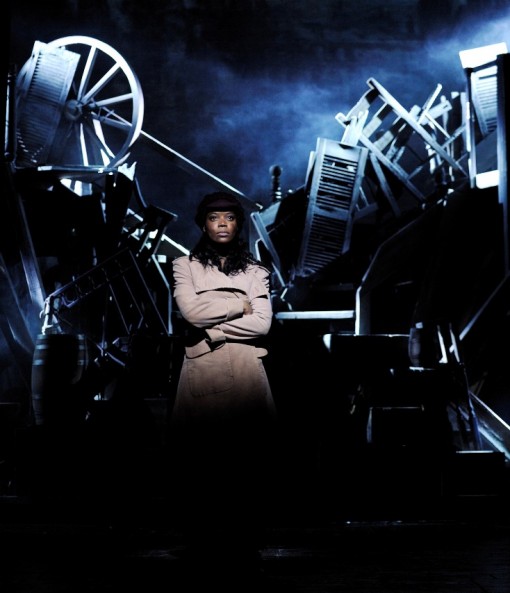 Chasten Harmon as Eponine in "Les Miz" at Broward Center.

Is it worth buying a ticket to the 349th road show of the allegedly retooled production of Les Miserables that opened Tuesday at the Broward Center where there’s likely an entire wall with graffiti from companies that have trundled to the barricades on it stage?

The answer is a surprising and resounding yes.

The 25th Anniversary Edition presented by Broadway Across America is not some cynical attempt to wring just one more quart of milk from the cash cow.

Instead, this is a muscular and passionate version that respects the source material (meaning the musical, not Victor Hugo’s masterpiece) but has been indeed, restaged, redirected and redesigned in ways that are clearly visible.

To start with, there is no turntable and there aren’t John Napier’s Transformers-like pieces that pirouette into barricades. Instead, designer Matt Kinley has taken Hugo’s pen-and-ink drawings as inspiration for projected backdrops and added in many large towers of bric-a-brac that slide on and off.

More than 30 people populate in the cast and there’s 15 in the pit. The producers have not cheaped out with a stripped-down version.

But what’s remarkable is how director Laurence Conor and James Powell, plus musical director Robert Billig and musical stager Michael Ashcroft have dove back into the meat of the story and gotten the cast to sing the well-worn score as if it was a fresh unknown piece that just came in the mail. Every last performer invests their work with a passion that is often moving without being treacly ‘ a major accomplishment for such dreary songs as Empty Chairs at Empty Tables and a procession of other numbers that usually strike us as whiny. ‘Similarly, they have reworked all the stage pictures and kept the long, long show moving smoothly.

The work is so solid that the telescoped plot is nearly comprehensible, even to someone who has not seen it before, seen one of the film versions or read the Classics Illustrated comic. Additionally, Hugo’s underlying theme about having faith despite the silence of God, and finding that love is actually proof of His existence, comes across clearly.

The cast ”down to the fourth revolutionary from the left — contains some of the best performances of the material that most people have seen other than Colm Wilkinson in the lead. Andrew Varela’s Javert avoids the overwrought classic tics to depict a human being who just happens to have a trumpet for a voice. Betsy Morgan’s Fantine, Chasten Harmon’s Eponine, Shawna M. Hamic and Michael Kostroff as the venal Thernadiers, even the urchins rotating in Tuesday night all were unassailably solid.

Then there’s Lawrence Clayton as the man who steals a loaf of bread and never hears the end of it. While he does not have that alchemical charisma of Wilkinson, the tall and broad-shouldered Clayton has that sonorous voice and the acting gravitas to provide the evening with a compelling center.

Some audience members may stumble over the elephant in the theater: Clayton is an African American, so is Harmon. Color-blind casting is a norm in London where black actors have been appearing in classics for decades such as Adrian Lester’s acclaimed Henry V.

But America has struggled with the divine Audra McDonald as the daughter of a white Texas rancher in 110 in the Shade or the wife of the 19th century fishing magnate in Carousel. Some audience members complained that Javert must be awfully stupid not to recognize the only wealthy black man in Paris, and noted that the white child Eponine becomes a black woman when she grows up.

But Les Miz has reached iconic enough status and a level of audience familiarity that color-blind casting will not throw the less literal-minded observers. The key is whether majority of the audience can suspend their disbelief and not be pulled out of the fiction of the play because they are admiring a black actor doing a ‘white’ part. Both Clayton and Harmon do that well by unreservedly inhabiting the characters they have been given. Both slip for a few seconds into Mariah Carey/R&B phrasing, but most of the time, they are mesmerizing.

And here’s a headline: You can actually hear the people sing! Road shows are getting a ragged reputation for second-class and even third-class sound as their crews show up a few hours before curtain and try to adjust their equipment. Not here. This is arguably the most clear, balanced sound of any tour in years.

That’s a good thing because Billig’s orchestra delivers a sometimes sinewy, sometimes Lalique sound that takes full advantage of Chris Jahnke’s new orchestrations. The aural soundscape ranges from a powerful wall of music to subtle tinkling pieces of percussion. You haven’t heard the score before like this.

Visually, the Victor Hugo impressionistic drawings that resemble the output of a Gallic J.M.W. Turner, do work. The projections are especially inventive such as the sewer tunnels receding and moving as Valjean carries Marius.

Critics are forced to see endless revivals and return visits of these warhorses, so we have quite a store of Les Miz productions for comparison including the London and New York incarnations.