Lionel Bart fans may not buy this problematic “Oliver!” 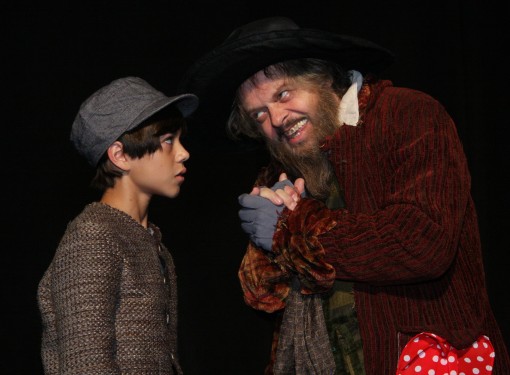 Cruz M. Santiago as Oliver and Gary Marachek as Fagin in the Actors' Playhouse production of "Oliver!" Photo: Alberto Romeu

Sometimes theater is not fair.

You can have strong singers and skilled character actors, you can have an experienced director, you can have a glorious score, you can invest lavishly in sets, costumes and a stageful of chorus members including adorable kids—and still not be able to capture the necessary magic.

The Actors’ Playhouse production of Oliver! has most of the right individual elements and some moments worked moderately well. If all you want is a scrapbook of beloved tunes delivered with enough talent to make you recall better productions, you’ll be satisfied.

But this version was never as moving or as transporting as it should have been.

On the plus side, credit producers Barbara and Larry Stein for not flinching on the budget. In Oliver!, scale is essential and they delivered: a two-tiered set complete with a bridge, closets full of ragamuffin costumes, eight musicians, and a cast of 22 adults, two corps of 16 kids each for alternating performances including pairs of Olivers and Artful Dodgers.

With a few exceptions, the casting is marvelous. Veteran Gary Marachek slips into the role of the lovable rogue Fagin as smoothly as he dons his ragtag coat because it is one of the few roles in musical theater where a carefully calibrated amount of skilled mugging and scenery-chewing is encouraged. Marachek, with his expressive eyes, arching eyebrows and leering grin, is proven royalty in that country. What’s missing here is the pathos that engenders sympathy when events turn against him.

Equally skilled are Ken Clement and Elizabeth Dimon as the beadle and the widow who run the workhouse. In addition to being able singers, these pros have fine-tuned comedy chops to carry the audience through early scenes in which Oliver is nearly mute.

Amy Miller Brennan brings a lovely voice and an earthy beauty to the’ soiled dove, Nancy. The musical director unfortunately allowed her to freely reinterpret the classic As Long As He Needs Me in a way that interrupted the crucial flow of this straight-ahead power ballad. Phrases were run together and there were speed-bump breaths that shouldn’t have been taken at all.

Shane R. Tanner, who like Clement has played his role before, was such a convincing bully as Bill Sikes that he’ll likely cause a few nightmares among the younger audience members.

On opening night, Oliver was played by Cruz M. Santiago, a sweet-looking boy with a smooth angelic voice. Kyle Christensen’s Artful Dodger was cute but needs to summon up more energy and animation.

The chorus of kids was naturally endearing ‘ very few were acting ‘ and you’d have to be Scrooge not to be won over by their smiles and earnestness.

Ellis Tillman’s evocative costumes of fourth-hand cast-offs created atmosphere and character like nothing else in the show.

The intangible problems start with the tone. There was no sense of poor little Oliver being thrust in a menacing, ever-darkening underworld, and therefore, no sense of exultant relief when Oliver is rescued.

Then there are the staging missteps. Just one glaring example: As Nancy is singing her big love song, the stagehands are shutting huge sliding panels behind her so they can change scenery ‘ an unforgivable distraction when she is trying to mesmerize the audience.

There’s also the pacing. The opening depends on a rousing rendition of Food Glorious Food. But in a crippling tradeoff, the song has been slowed down so that the orphans can navigate the difficult words. Yet, the final ten minutes of the show is rushed through with crucial plot resolutions smashed together like a pileup on I-95. First-timers to this musical will have to read Dickens in advance just to figure out what’s going on.

But the real problem is the lack of discernible emotional transitions between the spoken scenes and songs, or even between two songs.

In the Act II curtain raiser, we go from Nancy’s joyous tavern song Oom-Pah-Pah into Sikes’ My Name. Usually, Sikes’ appearance feels like someone left the door open and a blast of chilly air freezes the room. Here, it’s just one song coming on top of another song, through no fault of Tanner’s appropriate delivery.

Another misstep belongs to set designer Sean McClelland, whose brilliant work has included the foliage-bedecked boathouse in Talley’s Folly and the grungy basement in The Seafarer. But once again, he’s opted for settings that look exactly like what they are: large painted canvas flats. Maybe this is a budgetary issue, but it’s hard to feel you’re in an oppressive slum when the scenery has no feeling of weight.