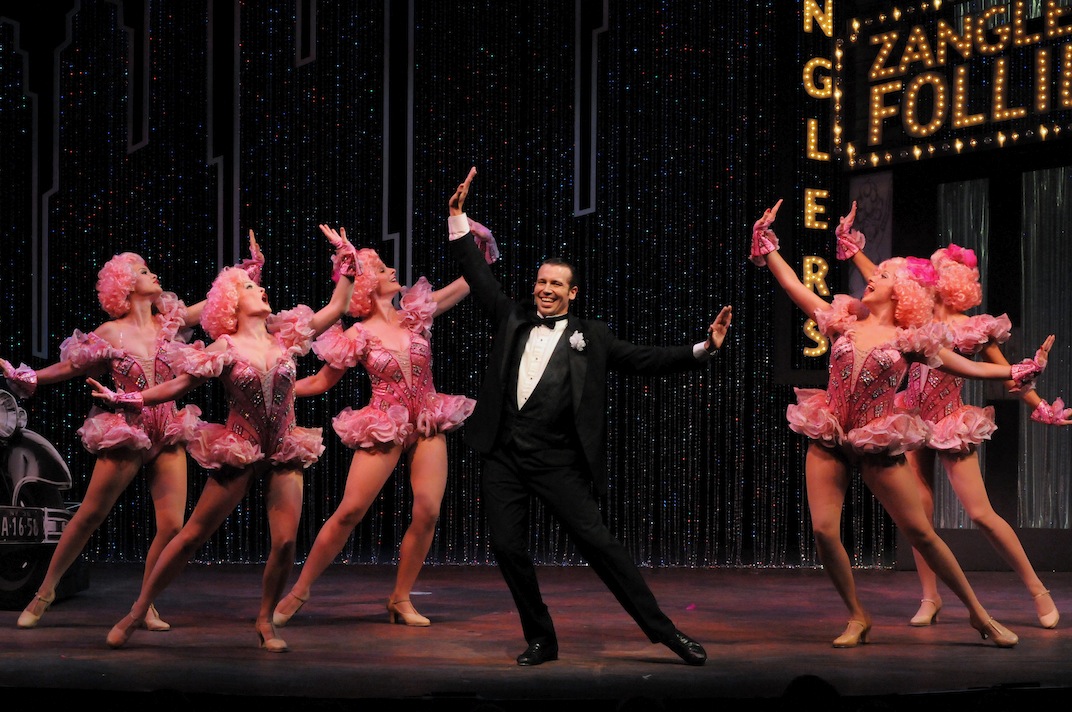 Matt Loehr takes the spotlight in "Crazy for You" at the Maltz Jupiter Theatre.

How infectious is the unrestrained joy spilling over the footlights at the Maltz Jupiter Theatre during Crazy For You? After the curtain calls Thursday, with the band still slamming out I’ve Got Rhythm, the house lights exposed two dozen people audibly singing along and twitching with spasmodic dance moves. No one laughed at them; most people probably were doing the same thing in their imagination.

Joy is the right word. The cast was so clearly having the time of their lives crooning and hoofing that it was nearly impossible not be swept up by their exhilaration.

A lot of people thought the Maltz’s Sound of Music last January was the best locally produced mainstream musical they had seen in several seasons. Crazy For You supplants it.

But we’re burying the lead. What everyone was talking about as they left humming were the remarkable performances of Matt Loehr and Vanessa Sonon as the tap-dancing bickering lovers-to-be. New York producers ought to fly down just to catch their work.

To see Loehr throw his head back in rapturous pleasure as he leaps into the air or to hear Sonon caress the heart-breaking But Not For Me is to savor the visual and aural definitions of unassailably entertaining first-class musical comedy.

Crazy For You bowed on Broadway in 1992 from an idea by director Mike Ockrent (Me and My Girl) and scriptwriter Ken Ludwig (Lend Me A Tenor). They tossed out much of the creaky libretto for George and Ira Gershwin’s’1930 Girl Crazy, rewrote the script and pulled in Gershwin standards and rarities from several sources to produce ‘The New Gershwin Musical’ that ran 1,622 performances.

They do. Directed here to a high polish by Mark Martino (who helmed La Cage aux Folles at the Maltz), the production is blessed with first-rate musical leadership by Helen Gregory.

No one can equal the once-in-a-lifetime choreography that Susan Stroman created for the original production, but Shea Sullivan delivers some of her most thrilling work ‘ from tapping on table tops to swirling in tandem ‘ seen in South Florida in years, and there’s been some damn strong choreography the last couple of seasons.

Then there’s the scope (some would call it budget, others would call it commitment to quality) that artistic director Andrew Kato got his board to back: 17 universally skilled performers, 9 equally talented musicians, 120 costumes and 5 pages of props. The bill: $420,000 and it’s all there to see.

But back to the stars, and stars they are. Sonon is a superb dancer who flashes that look that Ginger gave Fred which said, we are doing something really difficult, we’re making it look effortless and isn’t that just terrific? But what really stopped the show were her pure, smooth renditions of the ballads like Someone to Watch Over Me that benefitted from a clear top voice and sultry bottom notes.

It’s a good thing she was so good because otherwise she’d have gotten lost in the expansive performance of Loehr. Many before him have played the part as a debonair stage door charmer with a touch of haplessness that screamed out his serious need of a girlfriend. But Loehr, who has stolen about two-thirds of John Ritter’s Jack Tripper playbook from Three’s Company, brings a completely different vibe ‘ a lovably dopey goofball with a wide puppy dog grin. He throws himself into everything he does with energy. His voice is strong and solid, especially on his unique spin on They Can’t Take that Away From Me.

But his triumph, what he and Sullivan create together combines the rubber-limbed moves of Ray Bolger, the sweeping grace of Fred Astaire, the tendon-defying tap dancing of Gregory Hines and the unrestrained bliss of Gene Kelly.

Each member of the cast is impressive, especially Anna McNeely as the hero’s battleaxe dowager of a mother, Trisha Rapier as his snooty New York girlfriend and Michael Brian Dunn as the impresario Zangler.

On the production side, there’s deft work with Donald Edmund Thomas’ lighting and Keith Kohrs’ sound, although there were glitches opening night.

Jose M. Rivera pulled most of the clothing from theatrical costume shops and altered them for this production. But Rivera demonstrated a pitch-perfect sense for selecting tone, colors and designs for this fairy tale (okay, the desert rats don’t have a speck of dirt or wear on their clothes). He revels in a little welcome wit in his choice of accessories like a diamond tiara for a stuck-up debutante or a mangy coonskin cap for a down-on-his-luck gold miner.

Dan Kuchar’s sets ‘ inspired by the original production ‘ are a marvel. Carrying through the cartoonish theme, Kuchar creates a glittering Great White Way that gives way to a sleepy Old West burg on the cusp of turning into a ghost town. Everything from the forced perspective to the authentic-appearing signs advertising products are imbued with a playful sense of whimsy.

This season-closer is the kind of show that older Palm Beach County denizens adore. Some performances are already sold out, so go out and buy your tickets now.