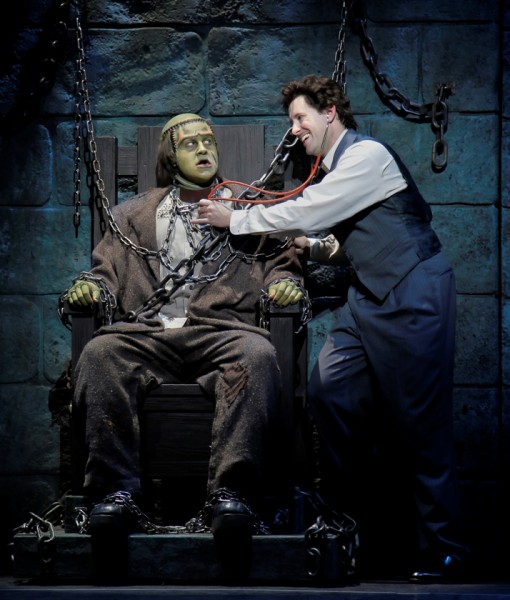 The musical lovingly recreates the film, a black-and-white spoof/homage to the Frankenstein films of the 1930s. The plot follows Frederick Frankenstein (Christopher Ryan) grandson of the infamous scientist Victor Frankenstein whose experiments have terrorized Transylvania Heights in Europe.

Frederick has spent his life trying to live down the family name and reputation, but when Grandpa dies and he inherits his castle, Frederick gets swept up in experiments to create new life from dead human parts, turning a large body and an abnormal brain into an erudite, tap-dancing monster about town.

Young Frankenstein is theatre for people who love movies, or at least love the movie on which it is based. All the characters are here: buxom blonde sexpot Inga (Synthia Link) hump-challenged Igor (Cory English), teasingly chaste fianc’ Elizabeth (Janine Divita), dour housekeeper Frau Blucher (Joanna Glushak), the last complete with horse whinny. And then there’s the Monster (Preston Truman Boyd), a misunderstood savage in need of a little love.

The classic lines in the movie take center stage in the musical because they have been expanded into songs, including Inga’s saucy, flirtatious Roll in the Hay, and Frau Blucher’s passionate He Vas My Boyfriend. Elizabeth’s non-desire is turned into a snazzy production number, Please Don’t Touch Me. The clever choreography and staging by director Susan Stroman takes the film’s beloved Puttin’ on the Ritz number to new heights as a full-blown tap-dancing extravaganza.

The performances in this national tour are strong throughout. Divita is delicious as Elizabeth, both in the first act when she’s discouraging Frederick’s advances and in the second act when she gets a taste of the Monster’s love. Glushak delivers the perfect combination of deadpan expression and simmering passion.’ English conjures up images of the great Marty Feldman (the film’s original Igor), but adds a wacky edge that makes Igor his own. Link is wonderful as Inga the innocent Transylvanian temptress.

Ryan and Boyd, as Frederick Frankenstein and the Monster, make quite the dynamic duo. Physically, Ryan has the look of a 1930s’ matinee idol, suave and smooth. His Frederick is agile and endearing, with the soul of a song-and-dance man lurking beneath his white lab coat.

Boyd is not as large and hulking as one would expect the Monster to be, but he makes up for his lack of physical presence with his believable evolution from monster to man. Their scenes together have a wacky sweetness, as they go from creator and creature to best friends and blood brothers.

Kudos to Don Daniels for making his few scenes as Ziggy the Village Idiot particularly memorable, and Don Benoit for his terrific turns as both Inspector Kemp and the blind hermit who tries to befriend the Monster.

Brooks, who composed the songs and co-wrote, with Thomas Meehan, the book for Young Frankenstein, keeps his trademark lowbrow humor alive. He loves the cheap joke, but in his hands, even his groaners have a measure of cleverness to them.