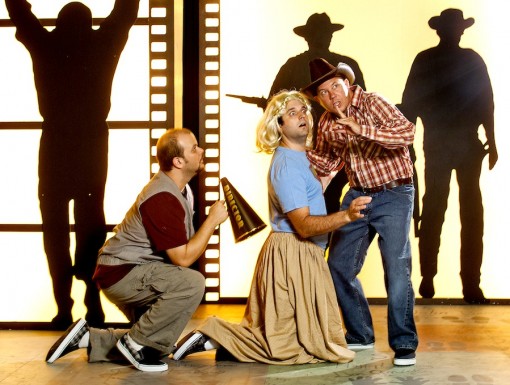 In the darkness, an announcer intones in movie-trailer voice, full of cultural import and dire portent: ‘From Akira Kurosawa and Walt Disney comes . . .’

A spotlight hits a bearded man wearing full Snow White regalia. Then the light reveals a ninja flashing his sword.

And the announcer proclaims with profound seriousness, ‘Snow White . . . and the Seven Samurai.’

Three delightfully daffy, rubber-faced actors chew the celluloid as they lampoon classic films and skewer the Hollywood culture in this hysterical exercise in low comedy.

The inventive direction by Richard Jay Simon is matched by the energy and abandon of Erik Fabregat, Antonio Amadeo and Christian Rockwell playing Hollywood hopefuls who act out scenes from proposed movies ‘ always sliced, diced and reconstituted combinations of old films.

Completely is a creature of the Reduced Shakespeare Company, the California-based troupe specializing for almost 20 years in madcap ‘abridgements’ of everything from Shakespeare’s entire canon to the history of Western Civilization. This edition claims to reference the 197 greatest movies in Hollywood’s 100-year history from A (A Cry in the Dark) to W for Hitchcock’s The Wrong Man. (A list of all 197 movies is here if you want to see if you caught them all.)

The more you know about movies, the more you appreciate how the jibes are layered one on top of another ‘ sometimes a full skit, often just a phrase wryly taken out of context.

During a science fiction skit, Rockwell and Amadeo begin to scream as they drift in space. Then a voice-over announcer intones the ad slogan from Alien, ‘In space, no one can hear you scream.’ So they replay the scene screaming with no words coming out of their mouth.

Credit the actors”delivery for putting across many jokes that are less funny on paper than they are coming out of their mouths. In fact, occasionally a joke is such a groaner that the actors roll their eyes or give a shrug. Amadeo told the audience after one clunker: ‘They can’t all be gems, folks.’ But even when a joke falls flat, three more are right behind it. Quibblers will note that the show drags just a hair in the first act during the introductions for each skit, but those last maybe 30 seconds. Plus, once in a while, the delivery gets a shade too manic or sloppy and the humor disappears.

But on the whole, this is what most madcap comedies aspire to be. Under the seeming anarchy, the chaos has been provided a carefully choreographed framework by Simon and the script.

Which takes nothing away from the cast. Fabregat long ago proved himself as one of the finest character actors in the region, notably as a George W. Bush clone in 2008’s Dirty Story and as a Looney Tunes-inspired assistant in last season’s Why Torture is Wrong and the People Who Love Them, both at Mosaic. Fabregat was performing through medication and pain opening night; he was injured in a car accident after Thursday’s preview performance. But it was almost impossible to tell as he ably put across his droll delivery that still acknowledges he’s having a good time, too.

Rockwell has been seen in several local productions as a slightly demented type who thinks he’s perfectly normal, memorably in the aforementioned Torture, The Foreigner and The Food Chain. He is especially good here at depicting grinning fatheads who deliver drivel deadpanned as if it was wisdom, lines like, ‘I don’t have enough talent to be an actor; I only have enough talent to be a star.’

Amadeo usually plays dramatic roles such as the writer in The Pillowman and the title character in The Elephant Man, but off-stage he always seems to be reining in a wacky streak. It is finally unleashed here with hysterical results. The sight of him, with a week’s growth of stubble, playing a hapless heroine in a blonde wig is priceless. And his motor-mouth high’school geek’s monologue is a verbal aria on speed.

On the technical side, the hair-trigger lighting by Travis Neff was so fluid that it was, well, cinematic. Production stage manager Linda Harris handled what must have been hundreds of sound and light cues. Douglas Grinn’s set was as witty as the play: the backdrops were silhouettes of icons as diverse as Rocky and The Little Tramp, the stage itself was the cement forecourt of Grauman’s Chinese theater complete with footprints, plus a Hollywood Walk of Fame with stars for the three actors.

It’s unfortunate that there’s no Carbonell for properties because there ought to be some award for prop mistress Luann Cardinal, Simon and costume designer K. Blair Brown. Again, much of this is dictated by the script (a James Bond-esque villain strokes the inert body of a white cat on his lap). But the show is awash with hundreds of toy guns, dolls, silent movie caption signs and jerry-rigged props that were sight gags in themselves. Just keeping track of them every night should earn Cardinal a master’s degree in backstage management.

My favorite prop/costume was Rockwell’s spacesuit helmet ‘ a half-hemispheric trashcan lid with the swinging panel removed.

That’s the show in a single frame: a certifiable hoot.