Posted on December 5, 2010 by Bill Hirschman 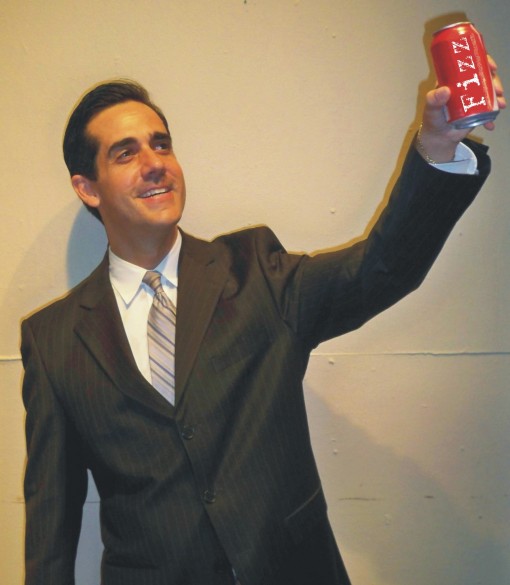 One thing theater does better than film is put you right there in the room with surreal images that disorient your equilibrium. When it successfully enlists your willing suspension of disbelief and the active participation of your imagination, you can have an experience more vivid that any special effects can conjure.

Unfortunately, it takes an extraordinary group of artists finding a nearly impossible groove to pull it off. New Theatre’s Fizz will make you laugh and make you think. But this satire never pulls off the intended schizoid smashup of slapstick farce wrapped in fevered dreams and a straight dramatic contemplation of the xenophobia inside the modern American Dream.

Fizz is a jarring m’lange of intriguing, even entertaining elements that simply did not mesh in Saturday’s production of Rogelio Martinez’s script under Ricky Jay Martinez’s direction.

The play is a heavily fictionalized account of how naturalized Cuban immigrant Roberto Goizueta helmed the disastrous creation of New Coke in the mid-1980s as CEO of Coca-Cola. Goizueta steadfastly refused to believe that this test-marked product, an improvement over the old formula, was being so thoroughly rejected by the American public.

Among the playwright’s many stimulating themes is the disconnect between how self-satisfied mainstream America hates change and how the immigrant experience is all about adjusting to, even embracing change.

The genial Goizueta gets into dramatic arguments with a subordinate who insists Americans aren’t rejecting New Coke’s taste, they’re rejecting a ‘foreigner’ heading their most American of commercial institutions.

But then the playwright intersperses bizarre scenes as the idealistic Goizueta goes into the field to quiz ‘ordinary Americans’ about the product. There he meets a succession of unhinged nonsensical characters in a sort of Candide Through the Looking Glass. There’s the coke-sniffing Rockette, the gun-toting housewife angry that the New Coke has ruined her recipe for pies, even a Keystone Kops sequence where two Pepsi executives hold Goizueta hostage for the Coke formula.

Like Rogelio Martinez’s When Tang Met Laika at the Denver Center last winter, Fizz juxtaposes scenes of very real human conflict with bizarre flights of the surreal. There are wry and relevant observations in these over-the-top scenes, but they don’t fit in with the rest of the play. The overall effect is that is that of a mess. Some playgoers might even argue they could be excised without hurting the main story.

It’s frustrating because some of the individual elements work beautifully. For instance, Goizueta’s speeches to the audience (ostensibly immigrants at a naturalization ceremony) are simultaneously wry, insightful and ultimately moving.

The hallucinogenic jabs at the American zeitgeist elicit plenty of chuckles. At one point, Goizueta lets loose with the painful details about his exile from Cuba in a long, passionate excavation from his soul only to be topped with an exclamation from an airhead who hasn’t known a moment’s deprivation: ‘You have a lot of baggage.’

The strongest single element is the performance of Carlos Orizondo under Martinez’s direction. Carefully coifed, dressed in a double-breasted suit and blessed with a gleaming smile, Orizondo makes Goizueta a handsome, earnest, charismatic man who has embraced the American Dream and is puzzled why this country has not returned his unquestioning devotion. Orizondo single-handedly grounds the play and holds it together.

His cast mates include Bill Schwartz , Francesca Toledo, Aubrey Shavonn, Tara Vodihn, Ozzie Quintana, Andrew Wind and Scott Douglas Wilson. Each must play numerous roles, donning intentionally false moustaches and falser voices in the Wonderland scenes. Some of the characterizations work, but most are less believable than the denizens of a Roadrunner cartoon, but that might be intentional.

One crippling factor is the set. Among other elements, it features four tall cloth booths on casters that shuffle through a dozen configurations in time-consuming scene changes. But the configurations never seem like anything other than configurations; they communicate no sense of place. At one point, people hidden inside make them turn slowly, apparently to communicate the hazy nature of a dream. It would be far simpler and cleaner to just change scenes with lighting.