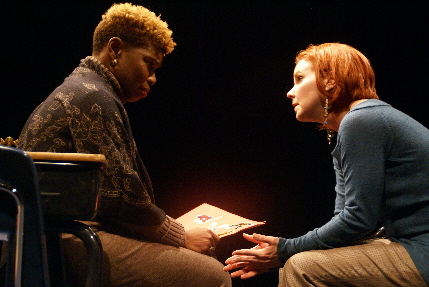 This is why we go to theater.

New Theatre’s Gidion’s Knot – wrenching, thought-provoking, shocking, visceral in ways no film can be– exemplifies why we spend time in dark rooms watching live people pretend to be people they’re not.

To be blunt, New Theatre’s reputation for quality is erratic at best. But every once in a while, it triumphs with an undeniable meld of talent, skill and craft to produce a work of art that illuminates the human condition.

Johnna Adams’ 2012 searing script initially sounds like an exploitive “ripped from the headlines” melodrama as a parent-teacher conference turns on a child’s suicide and bullying. But it digs far deeper. The play indicts mainstream society’s inability to deal with unconventional artistic souls, it cross-examines the efficacy of parenthood and even questions our ability to nurture children at all.

Just when you think you have the “sides” sorted out, the play turns your newly-recalibrated sympathies inside out. And then does it again. And again. Be warned: To do that, some of the material is unnerving enough to alienate some audience members to the point of being unable to see the rest of the play clearly. The arguments in the car going home will be spirited because Adams isn’t landing on one side or the other.

Corryn (Arenas) is the mother of fifth-grader Gidion, a precocious writer suspended by his teacher Heather (Groom), although the reason is initially unclear. When he brought home a note requesting a parent-teacher conference, Corryn set up the meeting. Then Gidion shot himself.

Now it is three days later and Corryn doggedly shows up for that conference wanting answers. Both women are consumed with emotion – and each has crucial information the other doesn’t know.

Corryn is all suppressed anger, but disconcertingly absent overt grief, with a cruelly blunt prosecutorial tone that can only be excused because of her loss. Heather is poleaxed by sorrow with exposed nerve-endings and is perpetually awaiting a direct accusation from Corryn – but her anxiety is not quite rooted in the reason we expect.

It takes Adams half the play to get to the major turning point and she only gives the actresses a limited emotional palette to play with until then – making the proceedings stray dangerously close to seeming a shade too long. But those emotions, intentionally reined in by the characters and the actresses, are so raw and so close to exploding that you won’t dare check your watch.

The title is a riff on the Greek tale of the Gordian Knot in which Alexander the Great was challenged to untie an incredibly intricate knot. Faced with a no-win situation, he took out his sword and sliced it (echoed a millennium later by Indiana Jones shooting a sword-wielding attacker and Capt. Kirk “cheating” on the Kobiyashi Maru test). Adams is not admiring Alexander’s solution; it reflects Adams’ plaint that the bureaucratic machinery of society cannot deal with exceptional but irregular beings. To Adams, that often means repression and suppression of free expression.

Adams and Martinez courageously avoid a touchy-feely ending. A last revelation in the final minutes gives the work the roundness of two mirroring halves, but some may feel it’s a bit too convenient.

Martinez’s direction is the best we’ve seen from him in years. These are two fine actresses, but few performances reach these levels without a director’s hand. Taking cues from a profusion of ellipses in Adams’ script, he carefully paces the evening, willing to let uncomfortable moments hang in the silence. Staging the show in the round, he has the women circle each other, face away from each other when they need a moment’s escape, and come together primarily when the inevitable conflict finally erupts.

An example of what Martinez and the cast have done to flesh out the script:  Corryn is left alone in the classroom while Heather seeks out the principal.

This is what is in the script: “The school bell rings. Children pour out into the hallways, calling to one another and banging
lockers open and shut. Corryn is startled. Slowly, she works up her courage to approach the door and stare through the window into the hall. She watches the children closely as the sounds die away. She stands not moving. She sits at a desk and waits.”

But Arenas and Martinez go another step: Corryn perfunctorily inspects the room silently. Then that bell makes her jump out of her skin. The sound of children outside engulfs her as a tortuous reminder of what she has lost and we finally see the unending sorrow unabated inside her.

The women’s race is not cited in the script and both are often played by white women. But Martinez – a champion of diversity in casting – has made the teacher a short white red-headed woman and the mother a tall handsome black woman with blondish sculpted hair. Race adds another layer of tension, especially when Corryn asks Heather whether she expected a stereotypical neglectful parent from a struggling socio-economic strata “like a stripper.”

Groom has been the best kept secret in South Florida theater for years. She rarely is hired by the high-profile theaters. It’s their loss. Her resume includes eight different prostitutes in last month’s sex comedy Have I Got A Girl For You at Island City Stage, a party girl in Outre’s musical The Wild Party and at New Theatre, the title character in Agnes of God. Often she plays multiple distinct characters in a single evening and she is often the strongest aspect of a show.

She inhabits roles and never strikes a false actor-y note. This is a tough role, not just for sustaining a depth of anguish, but keeping the audience mesmerized when really all she can do for 45 minutes is depict someone in psychic pain suffering ceaseless jabs from Corryn, all the while communicating there is something she isn’t saying. But when Heather is allowed to cut loose, Groom unleashes Heather’s anger, confusion and accusatory questioning.

Arenas is less known, but that should change after this. She exudes a scalpel-sharp intelligence struggling without success to rein in her fury, which seeps out in unrelenting sarcasm. She stalks the classroom like a determined avenger who is not sure who and what should be attacked.  When Corryn finally implodes, Arenas rips the guts out of anyone watching.

Martinez designed the classroom set with familiar educational accessories down to wadded up balls of paper on the floor. The most ingenious idea was creating the script-essential class project of the Gordian Knot. Martinez builds a daisy-chain of brightly-colored construction paper links around the “ceiling” of the entire set, ending in a hanging ball of impossibly tangled links and a plastic sword stuck through them.

The inspired script bowed at the Contemporary American Theatre Festival in 2012 and won an American Theatre Critics Association/Steinberg citation for best new plays the next spring. Since then it has been produced at least 14 times.