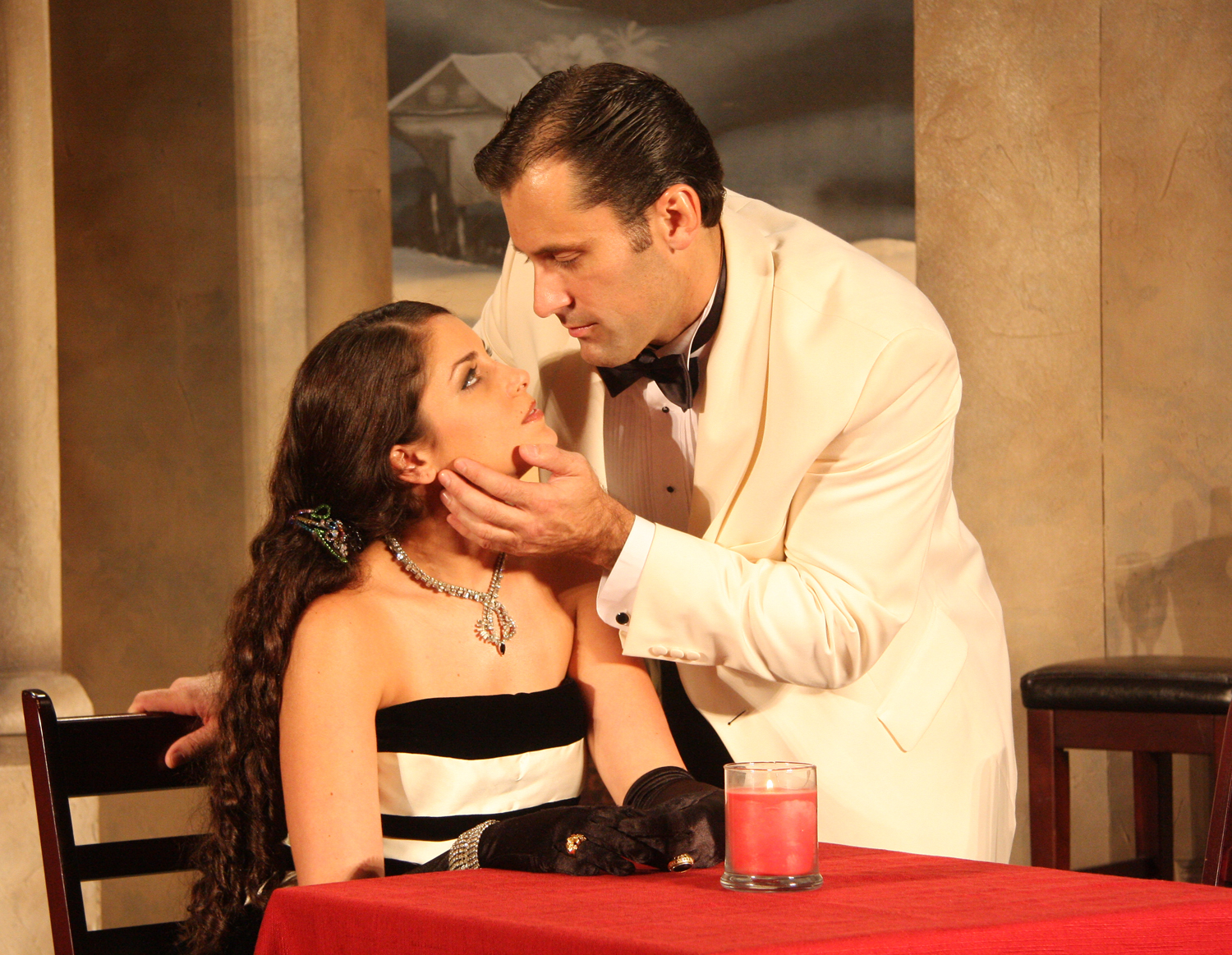 It’s autumn 1960 in Havana and everyone swirls in a dance of self-delusion. The harsh realities of the previous year’s revolution are closing in on the wary Cuban working class and the clueless Americans who still treat the country as their playground.

But those illusions can’t compare with the doomed emotional fantasies of the couple at the center of Nilo Cruz’s new drama, The Color of Desire.

An American businessman wants a Cuban actress to recreate scenes from a treasured and tragic affair. The actress wants to believe the businessman truly loves her and will help her escape the island.

Cruz creates a premise that is intellectually dazzling and emotionally thrilling. But the actual execution, on paper and on the stage, ebbed and flowed unevenly at the world premiere Friday at Actors’ Playhouse in Coral Gables.

The Miamian, whose Anna in the Tropics earned him the first Pulitzer Prize awarded to a Latino, is known for poetic dialogue filigreed with metaphors. The language here is intentionally not quite as lyrical, but it’s pungent with double and triple resonances.

I lie to him and I lie to myself. I disguise myself and conceal who I am so I can be part of a world that’s different than mine. And it’s a dark world’ but also magnificent, because I can dance and forget the smell of gunpowder that still lingers in the air from the death squads.

The plot depicts handsome American businessman Preston Thomas (Jim Ballard), whose family has vacationed in Cuba and operated industries there for generations. Since the revolution, the future has been uncertain but Preston sees no reason yet to leave his corner of Cuba where the men still sip cocktails on tiled verandas and the women still parade in jewels and furs.

He meets Belen (Hannia Guillen), a lovely young actress recently relegated to the theater’s basement costume shop. Belen is a strange brand of pragmatist. She deludes herself that she doesn’t care about the lengthening procession of losses in the post-revolutionary world. Having lost a cherished role to an inferior actress for political reasons, she tells Preston, ‘It wasn’t meant to be’ I’ve forgotten all about it. This afternoon at three o’clock, to be exact, I erased it from my mind.’

Traipsing around the country spending profligately are the harmless but paternalistic American couple, Caroline (Barbara Sloan) whose late father bequeathed her a home in Havana, and her paramour, Oscar (Michael Serratore). They are blunt objects blithely careening through a fragile land of minefields. Caroline says in an insight worthy of Paris Hilton, ‘I want to live moment to moment. If I knew what’s coming my way, then I would feel the future is kidnapping my present.’

But a quarter of the way into the play, the truth emerges. The married Preston wants Belen to impersonate his lost love, the tempestuous actress Emilia who herself used Preston to impersonate a beloved lover killed by the revolutionaries. Helpless in his obsession, he remolds Belen as Jimmy Stewart transformed Kim Novak in Hitchcock’s Vertigo.

They begin a torrid affair in which passion, true and feigned, are indistinguishable in a surreal fantasy. And all the while, the noose of politics tightens on dreamers as deeply in denial as the denizens of Cabaret.

Cruz says he does not write overtly political plays, but this particular time and place make it unavoidable. He clearly condemns the callous excesses and intellectual dishonesty of the revolution as embodied by Preston’s Che-like friend (Sandor Juan).

This script has evolved over several workshops and readings, yet clearly still needs more work. ‘The opening performance felt as if we were viewing the action through a hazy gauze and spent much of the evening trying to step back far enough to see Cruz’s pattern whole and clear.

For all the resonance of the subplots with the gauche American couple and the comic/tragic aunts, they steal time and focus from Belen and Preston. We hunger for Cruz to delve ever deeper into their complex relationship.

One clue is that the play meanders aimlessly until Preston reveals his proposal. And even then it’s not especially compelling until the couple make their first descent into the fantasy. That’s when Cruz’s genius meshes with David Arisco’s direction and the leads’ acting: The audience is as off-balance as the characters. We do not know if we are watching a recreation in the real world or a fantasy playing in his mind (or her mind) or a time traveler’s spying of the actual events in the past. It is an electrifying hall of mirrors scene worth the entire evening.

What simply does not work ‘ and desperately needs to ‘ is the growing dread of the impending and encroaching disaster. The expository lines and plot points are there, but they seem almost schematic ‘ perhaps a problem with the performance, perhaps the script. It does not help that the actor Juan is never convincing in his revolutionary ardor or menace.

Arisco has always been a solid director of staging pictures; his intimate arrangements of the intertwining couple here are especially deft and sensual. But his success in getting the performances he needs from this cast is wildly uneven, even from the same actor within the same scene.

Unfortunately, Ballard and Guillen don’t have much chemistry except in their fantasy scenes ‘ which makes sense for the characters but doesn’t play very well.

Ballard, a fine actor in many shows, is only convincing here when lost in the fantasy and when he finally realizes his cherished life has been appropriated by the revolution. The rest of the time, there is little charisma.

Guillen, a stage actress better known for her television credits, is breathtakingly beautiful, but she radiates little heat as the tamped-down Belen. Again, it is only when she impersonates the sultry Emilia that she fully inhabits a character and in her final scenes when she rails against her fate. But some of that may be intentional.

Grant her that Cruz has written a tough role: Has she genuinely fallen in love with Preston? If so, it happened with less preparation than Amy Adams’ princess in Enchanted. If not, then she has a prostitute’s pragmatic priority on survival. Or is it both? That’s not clear from the text or the performance.

But Sloan pulls off an equally difficult assignment: making us feel a twinge of sympathy for the shallow Ugly American as her world dissolves when the state takes her home. Here she’s helped by another of Cruz’s masterful passages: ‘You know, this morning when I was washing my face, I heard the dripping sound of the bath taps and I thought to myself that’s the sound I’m going to hear if they take away my house. My father’s house crying.’

As usual at Actors’ Playhouse, the physical production is first rate. Sean McClelland’s split set evokes the fairy tale world of the wealthy on one side and the kitchen sink realism of the basement costume shop on the other. Patrick Tennant’s lighting similarly underscores the dichotomy. Ellis Tillman’s costuming is shrewd from Belen’s workaday clothes to a procession of increasingly elegant evening wear that she dons for her assignations.

Despite its flaws, The Color of Desire offers inspired theatrical moments. Deep into the disintegration of the world of linen suits and mink stoles, a drunken Caroline has returned from the roulette wheel unfazed by her losses. For much of the play, she has epitomized profound denial, but suddenly she tosses clumps of her cash into the air in anguish.

Knowing she can never take her wealth out of the country, it is a tacit admission of a Paradise Lost.