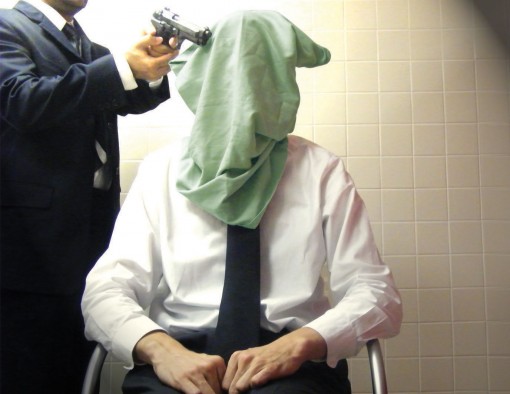 Murder and imagination take centerstage in the harrowing play, The Pillowman, by Martin McDonagh, now enjoying a strong production by the Miami theatre company Ground Up and Rising.

The Pillowman is set in an unnamed totalitarian dictatorship.’ Katurian (Curtis Belz) is a writer being interrogated by a good-cop-bad-cop tag team, Tupolski (Sheaun McKinney) and Ariel (Bechir Sylvain).’ Katurian discovers that his grisly short stories, most of which contain horrific violence toward children, bear striking similarities to several child murders.’ While Katurian denies any involvement in the murders or the disappearance of a third child, he is still tortured by the police and facing execution.’ He is further horrified to learn that the police have also arrested his mentally challenged brother Michal (Arnaldo Carmouze), the only other person who knows the stories.

The Pillowman is tense and suspenseful, guaranteed to make audiences squirm in their seats.’ In addition to its chilling scenario, the play explores deeper themes, such as the consequences of inspiring creativity and creating art, and where the blame lands when those efforts are misconstrued.

The cast is excellent.’ As Katurian, Belz first comes off like a two-bit petty thief, but his performance evolves and matures over the course of the play, transforming Katurian into a sympathetic antihero.’ Sylvain mines the gold from his richly drawn character, in both his violent outbursts and his epiphany.’ McKinney’s performance is controlled and compelling–he can do more with silences and a smile than most actors can do with a page of dialogue–and he is riveting to watch.

The most impressive performance, on stage and behind the scenes, is from Carmouze, who also directs.’ As Michal, he has just one extended scene, but he’s so natural, so realistic, that his performance is both funny and heartbreaking.’ His direction’wrings both the horror and humor from McDonagh’s play.

The Pillowman is marked by violence and black humor and in a lesser company’s hands, those themes can appear cartoonish and over the top.’ But Ground Up and Rising draws the subtleties from McDonagh’s dialogue and plot, resulting in a raw yet nuanced production.

The Pillowman runs through August 8 at the Little Stage Theatre at SoBe Arts, 2100 Washington Ave., Miami Beach,’ Performances Friday and Saturday at 8 p.m.; Sunday at 2 p.m. and 8 p.m.’ For tickets and more information, call 866-811-4111 or visit GroundUpAndRising.org.