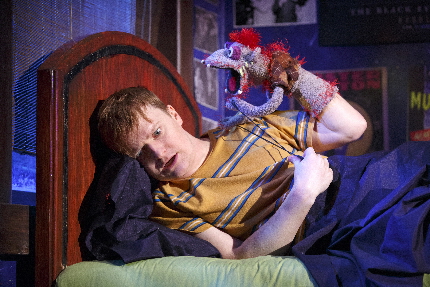 “Dark comedy” usually refers to a blithely cynical or whistling-past-the-graveyard attitude, but in the hilarious and unnerving Hand To God the darkness is pure visceral evil.

Through the nervous laughter as each civilized barrier is flattened with an out-of-control steamroller, Robert Askins’ play asks whether Evil is part of our being, whether we have invested an imaginary construct of Evil in some other creature like Satan in order to rationalize away that we house a duality of spirit.

And it does it with a puppet. As the embodiment of Evil. It’s a laughably lame poorly-constructed sock puppet created by a young troubled teenager at his mother’s insistence as a part of a church youth project.

But the foul-mouthed, even violent Hand To God is about as far from the good-natured nose-thumbing of Avenue Q’s as that was from H.R. Puffenstuff.

Other than an ominous prologue, this puppet Tyrone starts off like a cute Muppet reject left in a dumpster with a penchant for irreverent jibes. But he says and does increasingly horrible things, truly horrible. Yet his uncensored comments and actions of an unleashed id are riotously funny.

The genius of the piece, what makes this both uproarious and deeply upsetting, is that the puppet never leaves the arm of Jason. The gentle teen is surprised, mortified and appalled by Tyrone’s ratcheting perfidy. His face is distorted with horror and he tries to physically distance himself from Tyrone. The puppet morphs into an unfettered and uncontrollable entity of its own, perhaps a manifestation of Satan needing exorcism. But we can never escape the knowledge that Tyrone is being manipulated by Jason’s hand muscles. His deep raspy voice is not only coming from Jason’s voice box but we see Jason’s lips moving as Tyrone speaks.

The premise is that profoundly shy teen Jason (Steven Boyer) and his ineffectual mother Margery (Geneva Carr) are struggling to emotionally right themselves after Margery’s husband died. Margery has taken the only job she seems able to find in a small Texas town, working as a youth counselor at a church run by Pastor Greg (Miami’s own Marc Kudisch). Margery’s three charges in the gaily-decorated cinderblock church basement are Jason, oddball Jessica (Sarah Stiles) who would prefer they create Balinese shadow puppets, and sullen bully Timothy (Michael Oberholtzer). Margery is trying to get them to make puppets for a show to be presented soon during services.

The hulking Timothy’s main object is to consummate his undisguised overtures to have sex with Margery, who is just holding her emotions together as it is. Jessica is mildly interested in Jason. Jason just wants be anywhere but here. Margery, who seems prim but is simmering sexually, also is being pursued by the studly and persistent Pastor Greg who holds her economic future in his hands.

So, ostensibly for the church pageant, Jason has built Tyrone, a cute toothy sort with black button eyes and shock of red hair who won’t seem cute for long. Jason — struggling with adolescence, his father’s death and his mother’s obvious battle with sexual urges – begins to act out through Tyrone. For instance, the puppet makes blunt remarks to Jessica that reveal Jason’s sublimated sexual interest in her.

Tyrone graduates to issuing truth-telling statements that are dead accurate, but which people in polite company would not utter to each other. And then… . You’ll have to wait to see it to know how it all devolves from there, but there is wildly inappropriate sexual couplings of more than one kind, and behavioral meltdowns that immolate everybody and everything around them.

The achievement of Boyer is that the audience is alternately mesmerized into believing Tyrone is acting on his own and then realizing that he can’t be. Can he? And if he isn’t, what does that say about the duality of human beings?

Askins delves even deeper, asking whether the civilizing structures we have created such as society and religion are faulty and flawed sociological rationalizations that foolishly deny human wickedness, let alone being ineffective in controlling it.

There is no question that this show will be remounted in Florida regional theaters. But a word of advice: It requires a lot more than your average leading performer. Boyer’s expressions, his body language and vocal style are perfect as this 36-year-old actor creates someone just past puberty. But Boyer also has learned over three years doing this role in various versions the advanced level of puppetry skills that make Tyrone a credible living creature even though it’s clearly just wool and felt. To find someone who has or can learn both those skills is hard enough, but Boyer’s triumph is persuasive interaction between these two “characters” as if neither is connected to the other.

The script runs just a shade long, but it is perfectly paced and staged by Moritz von Stuelpnagel (really) the director of Studio 42, listed in Playbill as “a New York City producer of unproducible plays.” He finds and combines the right tones of satirical farce and insightful commentary, not to mention molding the performances of the uniformly superb ensemble.

Other reviews have called this play raunchy and irreverent. Trust us, those words don’t begin to cover it. By the play’s end, the civilized world inside the Booth Theatre and beyond has been devastated by Grand Guignol horror – with the audience rarely able to stop the laughter. 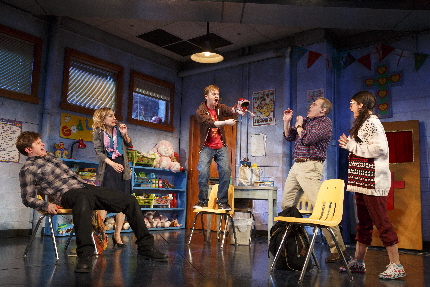 This entry was posted in Performances and tagged Geneva Carr, Hand To God, Marc Kudisch, Robert Askins. Bookmark the permalink.