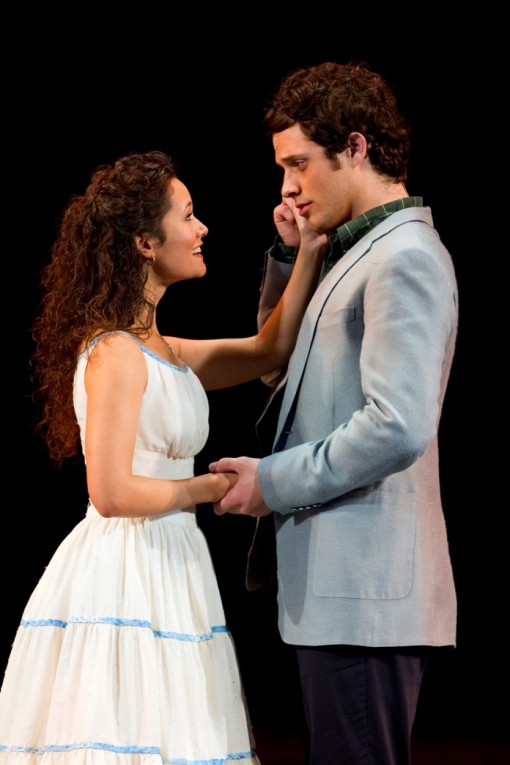 Kyle Harris and Ali Ewoldt as Tony and Maria in "West Side Story" at the Broward Center. Photo: Joan Marcus

What still stuns in this revival of West Side Story, 54 years on, is how Jerome Robbins uses the movement of human bodies to tell stories.

For the huge percentage of Broadway audiences unfamiliar with modern dance or ballet, Robbins”genius for propelling plot and exposing character through seemingly abstract motion was a revelation Tuesday at the Broward Center.

Because Robbins was often the 800-pound gorilla (he was also the director and co-conceiver of the work) he had the power to integrate dance into the marrow of a show’s forward movement as few choreographers of musicals before or since. Fosse and Bennett staged numbers. Robbins made movement organic to a show’s narrative.

Robbins died in 1998 but his ground-breaking work from 1957 has been scrupulously ‘reproduced’ by Joey McKneely and kept close to Robbins’ exacting standards by dance captains Ryan Ghysels and Beth Crandall.

There is nothing naturalistic about Robbins”disaffected street thugs who you’d cross the street to avoid — seen here gliding, pivoting and leaping through a slum. But Robbins is not depicting the exterior; he’s revealing the interior joy, anger, pride, fear, confusion and lust distilled to such a level of purity that we recognize our common humanity in them and can feel compassion for them. It’s as eternal as, well, Romeo and Juliet.

Robbins transposed much of that choreography into the 1961 film where it was exciting but seemed fairy-tale false. But onstage, that same stylized work is instantly accepted because we have already checked our disbelief at the door.

This tour directed by David Saint is based on the 2009 revival helmed by Laurents himself. They have infused every aspect of the production with a vitality and a flow that mirrors Robbins’ vibrance and drive.

This production has inventive touches of its own. The most moving is a scene missing from the film: a dream ballet in which Tony and Maria imagine a world without hate, normally danced while one of the Puerto Rican women off stage sings the haunting Somewhere. But in this version, the song is given to Anybodys, the ‘tomboy’ whose likely future as a closeted lesbian will be fraught with pain. The yearning in Alexandra Frohlinger’s clear strong singing voice ‘ intentionally different from her character’s defensive growl ‘ elicits a catch in your throat.

Some touches are not so well-advised. When Tony sings Something’s Coming and Maria, he barrels through the lyrics with an urgency appropriate to the character, illustrated by the singer getting a half beat ahead of the orchestra. But that robs the character of expressing unbridled emotions by filling every full-note in the lush, soaring melody.

The actors, singers and dancers throw themselves unreservedly into what middle-class theatergoers once thought was a gritty documentary and now can only be seen as a quaint fable with a timeless message.

Kyle Harris as a slightly dopey, basically decent Tony (think Finn in Glee) and Ali Ewoldt as a dewy Maria make audiences believe not just in their love-at-first-sight, but in their naive conviction that their love can conquer the ethnic hatred and crushing violence surrounding them.

For instance, Laurents wrote the lovestruck Tony saying to Maria, ‘It’s so much to believe ‘ you’re not joking?’ To which Maria says tenderly, ‘I have not yet learned to joke that way.’ Brilliant, but very tough to make as convincing in 2011 as these actors succeed in doing.

If the gang members led by Joseph J. Simone’s commanding Riff and German Santiago’s smoldering Bernardo seem just a shade old for their roles, it’s a trade-off for having the essential acting and dancing skills to pull off the piece.

In fact, the work has a schizophrenic feel. Sometimes it is a period piece with Laurents’ jarring slang (some phrases reportedly invented for the show for fear that whatever real jargon they used would date quickly). But other times, Laurents comes up with dialogue that could have been penned by Tupac Shakur. In the aftermath of bloodshed, a pharmacist yells at a gang member, ‘What does it take to get through to you? When do you stop? You make this world lousy!’ To which the boy says simply, ‘That’s the way we found it, Doc.’

Other than missing the full sound of the large orchestras of yore, the production’s only shortcoming is its most publicized element. The revival hired Lin-Manuel Miranda (creator of In the Heights) to translate some of the dialogue and lyrics into Spanish, notably I Feel Pretty, A Boy Like That and parts of the Quintet. Anglo crowds did not understand key moments and some of the new work was dumped a few months into the New York run. But enough has been retained to continue to baffle non-Spanish speakers. You can dope out the gist of speeches by the tone of voice, but any specifics and subtleties are nonexistent.

What does comes across both in the production and the source material is a purity of spirit in the yearning of humanity to put aside the hatred that only creates blood in the street. 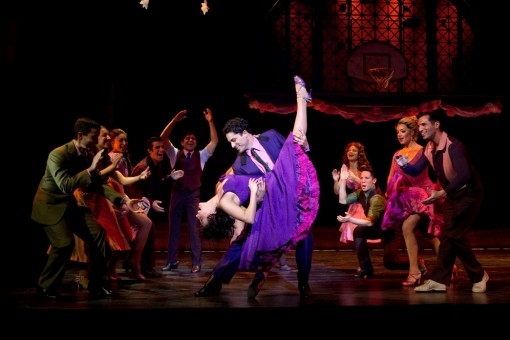