“Spider Woman” needs work to ensnare audience in its web 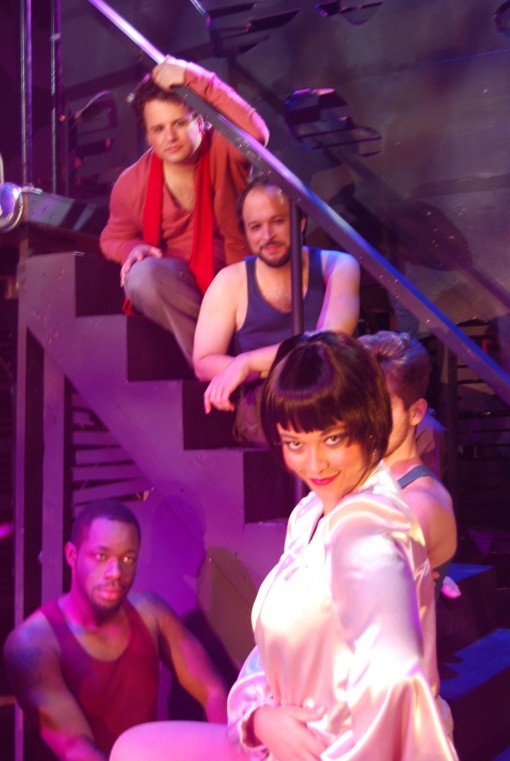 "Kiss of the Spider Woman" plays through Feb. 6 at Slow Burn Theatre in Boca Raton.

The performing arts are among the few serious creative endeavors that operate under a stopwatch—the endless gestation of Moscow Art Theater drama or Spiderman: Turn Off the Dark apart. At some prearranged point, the show must go on, ready or not.

In South Florida, with its notoriously constricted rehearsal period, that means an earnest, courageous company may simply need more time than it’s going to get when taking on a challenging piece of work.

Slow Burn Theatre Company’s production Friday of the rarely revived Kiss of the Spider Woman has several facets to recommend it such as the movie-musical choreography and sparkling costumes. But in the end, it clearly needs more time to gel, especially in exploring the complex characterizations that give the show its intellectual and emotional base.

The evolving relationship of a homosexual and a political dissident locked in a dungeon in a fascist state is an acting challenge because values of lust, trust, courage, cowardice, friendship and betrayal are forever swirling and morphing. It’s not that Tom Creatore as Molina the flamboyant window dresser and Matthew Korinko as Valentin the anguished revolutionary aren’t working hard under Patrick Fitzwater’s direction. It’s just that so many of the colors and motivations apparent in the 1985 film are not coming across the footlights to the audience.

This 1993 version has a sterling Tony-rewarded pedigree: a soaring and vibrant score by John Kander and Fred Ebb (Cabaret and Chicago), an insightful book by Terrence McNally (Master Class and Ragtime) and source material from Manuel Puig’s 1976 novel

The plot posits that Molina can be released to see his dying mother if he tricks Valentin into giving up the names of his colleagues. Throughout, Molina escapes the horror of the torture around him by blinding himself with memories of noir-ish B movies, made flesh and blood by fevered dreams of the sultry Renata Eastlick and a chorus of prisoners.

Some people question trying to reconcile the two wildly different tones in one piece. But that was a deliberate choice much like Dorothy suffering through black and white Kansas before coming to Oz, an attempt by the authors to underscore that fantasy can trump reality

But somehow this production lacks depth, dimension and dread in the prison scenes that you sense in the script. For instance, Creatore never communicates why Molina would not betray Valentin in the first 10 minutes of the show. The theoretically macho Valentin doesn’t seem especially repelled by sharing quarters with a raging queen ‘ which doesn’t give him far to grow as a human being as the friendship grows.

The only truly moving moment came when Molina and Valentin yearn for their loved ones in a contrapuntal quartet, Dear One, with Molina’s mother and Valentin’s girlfriend (Mary Gundlach and Meredith Bartmon whose lovely voices double the heartbreak).

And yet, this production has much going for it. Fitzwater’s staging is effective and his choreography is a glorious mashup of sambas, tangos, hips swiveling, pelvises pulsating and arms waving sinuously.

Creatore and Korinko throw their guts into the parts and both have voices that embrace one of Kander’s more difficult scores. The doughy Creatore fearlessly embraces Molina’s flamboyance, but he needs to dig much deeper into the conflict consuming Molina. Korinko is convincing but he is almost too stolid as if in perpetual mourning.

The stand out is Eastlick with her caramel skin, sensual voice, Louise Brooks helmet hair, lips framing a high-wattage smile. She exudes sexual heat while leading an able corps of chorus boys through their paces.

Rick Pena designed a hallucinogenic procession of outfits in rich fabrics for the bejeweled Eastlick, exposing both her d’colletage and her shapely legs.

Set designer Ian T. Almeida and lighting designer Lance Blank created an inky black-on-black prison whose wallboards have deteriorated to expose the lattice beneath. When the cinematic fantasies appear, vivid colors wash the cyclorama on the back wall and peek through the dark web of eviscerated prison walls.

Anne Chamberlain’s tiny band was competent but could not do justice to the rich sound that the score requires. Traci Almeida’s sound needed work as well: The band overpowered the singers many times, not helped by the fact that some singers like Eastlick swallowed the beginning and ends of their lyrics lines.

Still, when Eastlick as a symbol of death places a fatal kiss on Molina in the Technicolor finale, the audience has to appreciate Slow Burn mounting a nearly forgotten musical that deserves another Broadway revival soon.