State Theatre Project’s “Billboard” pushes agenda, but not the envelope 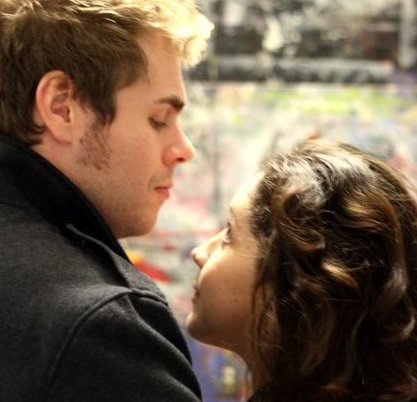 In his wry protest against consumerism, playwright Michael Vukadinovich asks the question: Can love survive a clash of art and capitalism?

The State Theatre Project was founded just over a year ago with a stated mission to present socially relevant works. Vukadinovich’s Billboard, the company’s first full-length play, is a fitting selection, presented here in its regional premiere.

The scenario is loosely based on the true story of 20-year-old Andrew Fischer who put his forehead up for auction on eBay to become a “Human Ad Space” in 2005. Billboard opens with Andy Price’s back to the audience. His girlfriend, Katelyn, is aghast, her mouth twisted in confusion, yet dripping with contempt, while his best friend, Damon, studies the tattoo on Andy’s forehead, freshly inked and newly unveiled. “It sort of looks like Japanese characters,” says Damon. “It’s a pair of headphones,” says Andy.

When the human billboard goes for the big reveal, the audience sees that scrawled above his brow line is the word “Questa.” Recent college graduate and student-loan-strapped Andy will be paid a hefty sum by the Questa electronics company to go about his daily business while advertising the brand. That sounds simple enough, but quickly Andy’s brainiac idea begins to create consequences, in his relationships with his artist girlfriend and his save-the-planet best friend, and even within himself.

Billboard is a bit of a tough sell, a three-person dramedy with a single sparse set. The play’s biggest flaw is that it works too hard at conveying its message. While the dialogue bombards the audience with the theme “No good can come from greed,” a constant barrage of commercials, from Wendy’s classic “Where’s the Beef?” to Geico’s squealing piglet in a van, loops during a multitude of blackouts and on the side wall during intermission. While we should feel overwhelmed by it all, nothing ever quite hits a fever pitch.

The three actors, Scott Douglas Wilson as Andy, Gladys Ramirez as Katelyn, and Justin McLendon as Damon, deliver earnest performances, and are at their best when allowed to dig deeper into their individual character’s psyches. The playwright gives each a monologue in an effort to fill in the blanks of what goes on inside of their own heads when they aren’t fixated on Andy’s forehead.

David Hemphill, founder of The Project, directs Billboard with a comfortable ease, ideal for the intimate setting he’s chosen at Barry University’s Pelican Theatre..’ However, he could have worked a bit more to help the three actors form a tighter ensemble. At times, it feels as if they are each fighting each other for single attention, rather than working as a cohesive unit.

After the curtain falls, it’s unlikely that anyone in the audience will second-guess getting into their Toyota Camry or stopping off at McDonald’s on the way home. Still, Billboard provides a worthwhile chance to experience a new play performed by a young troupe that holds great promise.

Michelle F. Solomon has been immersed in theater since she first played the role of Millie in Picnic at the age of 12. ‘A graduate of Boston’s Emerson College, she has been a theater critic at the Albany Times Union and the Detroit Free Press, a television entertainment reporter, and served as an executive producer at WPLG-TV. She is a also a syndicated movie reviewer, involved in local improv groups, and recently got up the nerve to perform stand-up comedy.