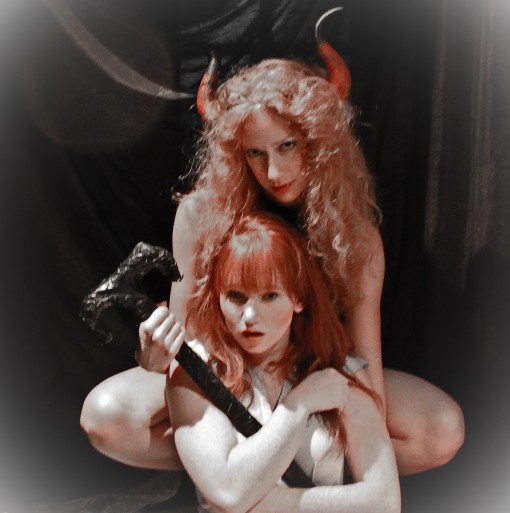 Ilana Isaacson and Shelby Steel in the "The Angel Eaters." Photo: John Torrenga

The first image of Johnna Adams’ The Angel Eaters is provocative–a tableau of Depression-era characters, looking stunned and haunted, standing in front of a broken-down farmhouse. The next image is of a young girl being embraced by an otherworldly woman. There’s no doubt that an intriguing evening of theater is about to begin.

The Angel Eaters is American Gothic turned on its ear, a dark and twisted slice of the underbelly of Americana. This production by Infinite Abyss marks the play’s Florida premiere. The first installment of a trilogy, The Angel Eaters focuses on the Hollister family: the determined and mean mother Myrtle (Cheryl Kirsh) who wields an ax and is not afraid to use it; desperate, knocked-up older daughter Nola (Christina Groom); and sweet, simple-minded younger daughter Joanne (Shelby Steel), a girl who speaks to angels and can raise animals from the dead with catastrophic results.

The family patriarch, Herbert, has just died, and his corpse is lying inside the farmhouse. Myrtle is so eager to bring back her man that when fast-talking con man Fortune Clay (Scott Douglas Wilson) tells her that his ‘nephew’ Enoch Clay (Joe Harter) can resurrect Herbert, she hands over all her money and then chains Enoch to the porch so the two can’t run off until she gets what she paid for.

Adams has a fertile imagination and a flair for poetic dialogue. The Angel Eaters isn’t perfect–one wonders if all the laugh-out-loud moments are intentional–and it ends with a superfluous coda. But it is original and transportive, and does offer some exciting, unexpected moments.

Director Jeffrey D. Holmes has crafted an evocative production that conjures up the hopelessness and desperation of dustbowl Oklahoma in the 1930s. His use of Robert Johnson blues songs adds to the mysterious mood. The scenic design by Douglas Grinn is clever and looks as if it’s weathered several dust storms.

Wilson perfectly conveys the smarminess of a con man who will say or do anything to save his pathetic hide and make money doing it. It’s fun to watch him, because he makes you feel like he’s making up his next move on the spot. He’s matched by Groom, who embodies Nola’s desperation and willingness to believe anything in order to escape her circumstances.

Kirsch chews a little more scenery than needed to portray Myrtle, and veers more into caricature rather than sticking with characterization. Jim Gibbons has a meaty part as a much older man in love with Joanne, and it’s to his credit that he infuses his essentially creepy character with so much sympathy and humanity. Steel, with her long red hair and pale, perfect complexion, deftly portrays Joanne’s shocking inner conflicts.

The Angel Eaters is an intense little horror story with plenty of twists and turns into a bizarre world of good and evil, angels and demons, heaven and hell. Nothing is black and white, everything and everyone is colored with shades of gray. It’s a great way to gear up for Halloween.