“The Irish Curse” measures up quite well at Mosaic Theatre 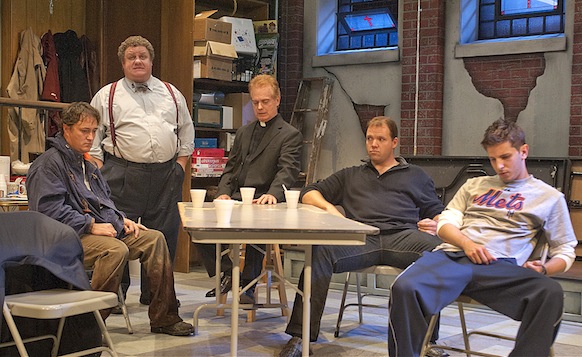 "The Irish Curse" runs through March 6 at the Mosaic Theatre in Plantation. Photo: George Schiavone.

For every man who has been dragged to the theater unwillingly to see a play about female bonding, the miseries of menopause, or overdrawn soliloquies describing what’s going on “down there,” The Irish Curse is their revenge.

For the uninitiated, the “Irish Curse” refers to the stereotypical belief that Irish men have been shortchanged in regards to penis size. And while an entire play of five guys talking about their lack of proper equipment may sound fairly tedious, a great script by Martin Casella and standout performances and direction at the Mosaic Theatre more than overcompensate for possible, er, shortcomings.

The black box theater inside the American Heritage Center for the Arts ‘ the performance space for Mosaic Theatre in Plantation ‘ creates an intimate setting for the self-help group play. Set designer Douglas Grinn recreates a Catholic Church basement meeting room at St. Sebastian’s in Brooklyn, sparse with folding chairs and the requisite Mr. Coffee machine. Three stained-glass windows, each with a painted cross, are at street level. Realistic rain falling outside the windows elicited a few “oohs” from the audience as the lights went up.

This cozy, yet nondescript gathering place has become a safe haven for the small group of men, all of Irish lineage, who get together each week to talk about their feelings of not measuring up. On this particular Wednesday, a newcomer, Kieran, has been introduced to the three regulars Rick, Joseph and Stephen, by support group leader Father Kevin, pastor of St. Sebastian’s.

Georgian real-estate attorney Joseph Flaherty (Ken Clement with a perfect Southern drawl) suffers the wounds of his wife’s exit note after she traced another man’s privates on a piece of paper next to the words, “I’m Leaving You,” while young sports-medicine student Rick Baldwin (Ryan Didato) embellishes his luck with the ladies. Bronx immigration cop Stephen Fitzgerald (Shane R. Tanner) is tall, handsome, cynical, and gay. Kieran Riley (Todd Allen Durkin with a spot-on brogue) is the only true Irishman in the group, having just come to America from the Emerald Isle. Even Father Kevin (Barry Tarallo) has his own reasons for loathing the Irish curse.

Casella’s smart dialogue helps to create a substantive reason for each man to be so plagued by the tiny problem that draws them together, and this is what keeps the dialogue-heavy dramedy moving for 85 minutes.

Jokes abound as each describes the requisite body parts in intimate detail, from cocktail weiners to baby corn to thumb-sized. “Some guys are super-sized, mine is off the children’s menu,” Stephen says. There are uncomfortable moments of graphic description, along with frank sex talk (this is a play meant for mature audiences), but the conversation is well placed since it makes the characters’ genuine hurt seem all the more real.

Director Avi Hoffman uses the space accordingly, and it is a challenge to stage a play with the audience seated on two sides. At times, actors have their backs to the audience, which can serve as a statement, but also a distraction. During a pivotal scene, the wide physique of Clement as Joseph completely obstructs the view for about one quarter of the audience when Tarallo as Father Kevin begins to unspool his own story. It wouldn’t be a surprise if someone said, “Hey, down in front!”

One piece of blocking that is smart, but overused is each character’s placement front and center as they bare their soul as if stepping into a confessional—interesting the first and second time, but predictable after that.

Yet Hoffman largely does a stellar job in bringing this group together as a tight-knit ensemble. Each actor digs deep into his character, while never upstaging another, which in a “can-you-top-this” environment could easily be the case.

While The Irish Curse could fall victim to one-line willie jokes and stereotypes of men comparing notes in a locker room, the play in the capable hands of the lively Mosaic Theatre is the chance to spend worthwhile time getting to know a few interesting characters. And while the guys may be short in some areas, the measure of these men and this production is in its honesty, which makes for a top-notch night of theater.