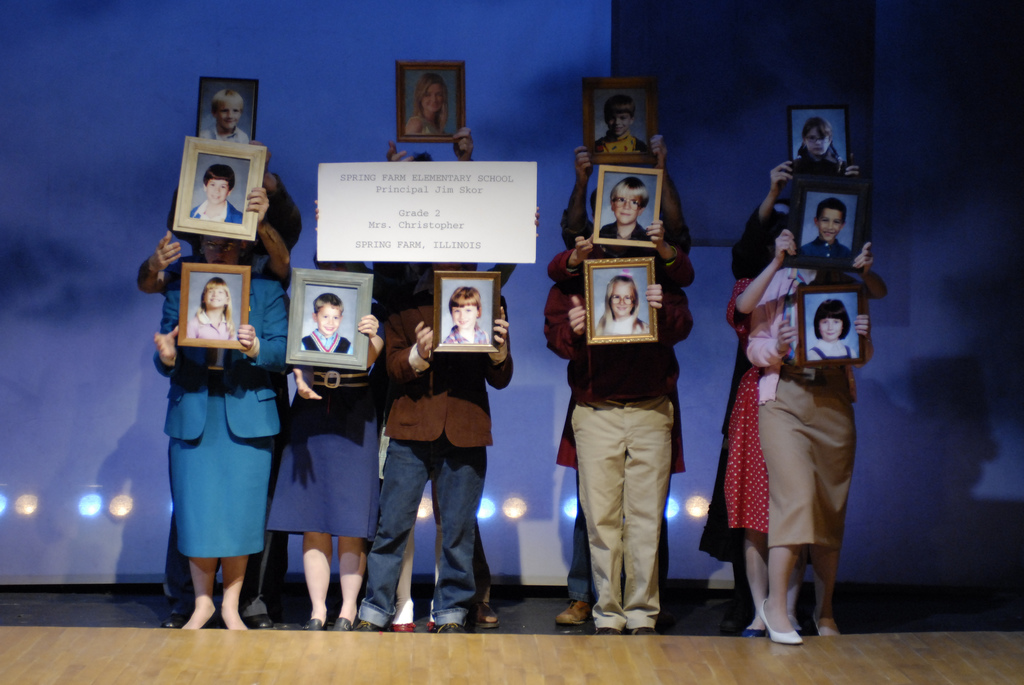 Photo: The House Theatre of Chicago

Early in’The Sparrow, teenagers stand at the cusp of a railroad embankment as a roaring freight train hurtles past them inches away. It’s an exhilarating reminder of classic adolescence when you dare Fate to challenge your invulnerability.

The fact that this scene really occurs inside the Arsht Center and that it’s a trick of lighting, sound and twitching bodies seemingly buffeted by the wind of the passing train, well, that’s the alchemy of theatrical magic.

The sense of magic before your eyes is appropriate since this is a tale about a lonely, haunted teenager with supernatural powers in a small Midwestern town.

Don’t let the’Buffy the Vampire Slayer vibe dissuade you, although we are clearly in Joss Whedon’s home turf of ‘high school is a circle of Hell itself.”The Sparrow is a moving, occasionally funny and frequently stunning piece that melds acting, music, highly stylized choreography and, above all, endlessly inventive staging.

The Arsht has bankrolled this three-week revival by the House Theatre of Chicago, which created and premiered the work in 2007 and moved it to two other theaters after receiving the kind of acclaim you’d expect from the playwrights’ mothers.

While it has faint echoes of’Wicked, Carrie and Ray Bradbury’s short stories set in the darker crannies of the heartland ,’The Sparrow is its own work.

The plot ”just a tad thin and predictable ”focuses on Emily, the sole survivor of a school bus accident that wiped out the town’s second grade class ten years ago and eviscerated the community’s psyche. Emily was shipped off to a mysterious religious institution, but now must graduate from an accredited school so she can go to college. Her hometown agrees en masse to house and educate her during her senior year. Emily is a severely shut-down loner clearly terrified of something. But her angst echoes the feelings of every teen convinced they are condemned to spend their entire life as a misfit.

The script by Jake Minton, Chris Mathews and Nathan Allen is strongest in this first section as the entire community and her host family in particular struggle with the altruistic desire to help a troubled girl and their desperate need for her to fill the void that the tragedy created in their lives.’We watch the familiar tale of the outsider trying to fit in until suddenly the town learns of her ability to fly ‘ among other superpowers.

At this point, the show takes a hard left turn into comicbook land. The show has already been rife with metaphors and theatrical staging that signals this is not a kitchen sink drama. Still, it’s interesting that many Boomers left comic books behind when they reached adulthood. But their children, even as young adults, have absorbed comic books into the fabric of their cultural lives, such as their influence on the plays of Miami’s Marco Ramirez.

In the second act, the community’s elation at Emily’s powers leads at first to her being embraced. Then, of course, even more tragedy seeps in as her real secret emerges.

But the reason not to miss this show is not the story; it’s the story-telling that you only find in theater ‘ the metaphors that the company has created just with light, sound, movement and minimal scenery. For instance, the grieving families carry framed portraits of their dead. As Emily walks through the town, each resident lines up, hiding behind a photograph of their home and whispering as she passes. There’s an almost wordless five-minute choreographed montage of Emily being overwhelmed on her first day of class by the swirl of high school life.

Examples can be seen in photos at’thehousetheatre.com/seasons/four/shows/the-sparrow and a video is at’www.youtube.com/watch?v=KgSklN6N6G4

A very few moments seem heavy-handed, and some are not quite clear in their intent ‘ although they may have been left loosely defined so the audience can debate what happened.

The House Theatre collective collaborates so fully that it’s foolish to guess who made what contribution. But start with director Nathan Allen who conceived a fable deftly employing every device in the theatrical toolbox. It’s not just stagecraft. In the opening, Allen directs his mourning townfolk to pause between the written lines, to let the razor edges of the tragedy hang in the air unspoken for fear that the words themselves will reopen the wounds.

Then there’s the 13 cast members in their 20s who convincingly double as emotionally-wounded adults as well as the awkward teenagers. Having worked together for years, they evoke a sense of community from the opening of the play.

Leading the troupe is Carolyn Defrin, who has played Emily in all four productions. Until Emily’s powers are revealed, Defrin’s anguished angular face, hair tied in knots and pigeon-toed posture depict someone certain that the ceiling is about to fall on her at any moment. But as Emily is accepted in the community and then idolized, the joy on Defrin’s face blinds the room.

The ingenious work by the entire creative team under Allen is self-consciously theatrical, yet in complete service to the story. Dreamlike video projections recreate the tragedy. The settings are creatively but simply indicated, such as rearranging gym locker doors to create a dressing room and a school hall. The sound and lighting effects keep the incidents of magic from seeming ludicrous.

Only the high school’s fight song has lyrics (wickedly sophomoric ones). But Kevin O’Donnell’s score provides a steady underpinning like a movie soundtrack. Tommy Rapley’s choreography ranges from a Fred and Ginger pas de deux to the frenzied gyrations of the homecoming dance to a glorious solo when Emily sheds her pain and expresses bliss for the first time all night.

One piece of advice: The show is played with the audience on three sides; get a seat in the center section to enjoy the full impact of the staging.