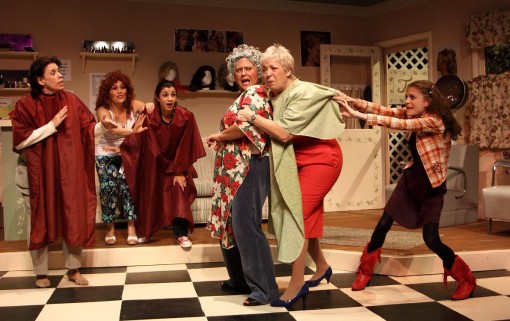 The Broward Stage Door Theatre in Coral Springs is reviving Steel Magnolias, that iconic chestnut about the strong friendships between a group of Southern women, in a lackluster production that fails to illuminate the winning aspects of Robert Harling’s sentimental play.

Steel Magnolias takes place in a neighborhood beauty parlor in Louisiana where old friends get together on Saturday mornings to gossip and get coiffed. There’s beautician and owner Truvy, (Merry Jo Cortada), shy new hairdresser Annelle (Nikki Bromberg), wealthy eccentric Ouiser (Sally Bondi) former mayor’s wife Clairee (Miki Edelman), pragmatic M’Lynn (Jana S. Tift) and her willful daughter Shelby (Danielle Tabino). The play opens on the morning of Shelby’s wedding. There is tension between mother and daughter, which stems from the fact that Shelby is diabetic, and M’Lynn can’t help but worry about her daughter’s fragile health. The play spans several years, during which Shelby makes the fatal decision to get pregnant and have a baby.

Harling wrote Steel Magnolias as therapy to deal with the death of his sister. The characters are based on his family and the people in his hometown, which partially explains the play’s heavy-handedness.

Steel Magnolias lacks the critical eye needed to elevate it from maudlin movie-of-the-week melodrama to an insightful drama worthy of the stage. What we’re left with is clunky exposition, precious and precocious characters, and dialogue that is manipulative and cloying.

One of the play’s fatal flaws is that Shelby, the character based on Harling’s sister, is not endearing. She’s supposed to be a headstrong free spirit, but the way she meddles in everyone else’s business and believes herself to be the authority on all matters, is annoying, and it’s hard to feel much sympathy for her.

Despite these shortcomings, Steel Magnolias has become a favorite for theaters because’ it contains six meaty roles for women. But in the Stage Door production, most of the actresses fail to find the humor in Harling’s southern-fried banter, which, when done well, is the one bright spot in the play. Comic timing is nonexistent, nor do they hit the right notes to get the laughs. Most of the cast is trapped in dreadful wigs, which doesn’t help the (intentional) humor or their characterizations.

Bromberg delivers the most complete performance, embodying Annelle’s early shyness and her embrace of religion. Cortada seems to have overdosed on the film version of Steel Magnolias, and is content to deliver a bad Dolly Parton imitation. Edelman has an elegant demeanor, but fails to punch her best lines. Tift is dull as a dishrag. Tabino has a hard job, since Shelby is so annoying to begin with, and nothing in Tabino’s performance makes Shelby more likable. Bondi doesn’t go far enough as the cranky southern eccentric.