“Wicked Sisters” proves a muddled mix of comedy and drama 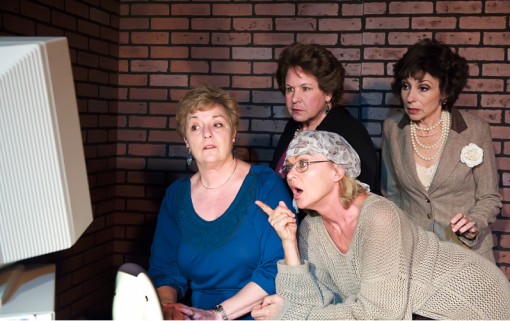 Australia is home to strange creatures that seem pasted together: the cuddly but prickly koala, the grounded emu and the duck-billed platypus. None are as strange an ill-fitting hybrid as Alma De Groen’s play from down under, Wicked Sisters, seen Saturday night.

Despite the efforts of its hard-working actresses, the American premiere at The Women’s Theatre Project couldn’t disguise that De Groen has grafted four different plays onto each other in succession.

The first is a dishy Sex in the City-like episode starring women in their mid-to-late 50s.”She looks like something the cat dragged in,’ says one. Another answers, ‘My cats wouldn’t bother.’

The second is The Unreal Housewives of New South Wales as scandal after scandal tumbles out. The third is genuine drama as the quartet wrestles with profound betrayals.

And the fourth and final one veers off into cosmically philosophical musings about human relations with references to Darwin and lines like ‘There’s no morality anymore, just biology.’

Each facet is mildly interesting, even making you laugh or ponder occasionally. But while superlative playwrights can whiplash you convincingly between comedy and pathos, this script seems too schizophrenic to be cohesive, compelling or consistently comprehensible.

The set up — I think — is a belated reunion of four college friends several months after the ringleader’s husband has strayed off a cliff while in the grip of Alzheimer’s disease. His shell-shocked widow (Miki Edelman) has called the reunion in his study where the dead genius’s computer is still churning away at mathematical computations representing warring life forms. Her friends are a shallow realtor (Linda Bernhard), a cool contained career woman (Elizabeth Dimon) and a social dropout (Jude Parry) who was a math genius herself but who now swabs out motel rooms.

After the women catch the audience and each other up on the past 30 years, the liquor flows and secrets are revealed, leading to a devastating emotional meltdown ‘ although the play still has 15 minutes to go.

De Groen has achieved some admirable goals. She gives four terrific actresses of a certain age the meaty roles they deserve.’ And, she gives an articulate voice to the concerns and challenges facing these characters. She also cross-examines the myth of unshakeable sisterhood and the subtle aftershocks of the feminist movement. ‘Isn’t it ironic that the women who fought for liberation are doing worse than the women who fought equality?’ one says.

But the fatal problem lies in the first act when the women must shovel entire novelettes’ worth of backstory between witty banter and bon mots. It is only in the 15 seconds before the end of the act, when one character drops a bombshell, that we get the tension, conflict and narrative drive that has been missing for nearly 45 minutes. And then the house lights come up.

Under Genie Croft’s direction, Dimon comes off the best. She succeeds in creating a believable character, scoring with the delivery of the droll smack-downs, as well as in her angst-filled admission of the second act.

Parry, a fine actress with a solid track record, plays her iconoclast like one of Shakespeare’s mad soothsaying hags with eyes nearly bugging out and limbs cocked at weird angles. Maybe that’s what she and the script meant to achieve, but this creation is more a cartoon than a real person.

Bernhard’does what she can with the comically self-centered realtor. But she only becomes convincing when her character becomes drunk in the second act.

Edelman has the most vanilla role as the long-suffering widow grieving over more than just the loss of her husband, primarily because De Groen hasn’t given her much more than that to play with.

I can’t vouch for the accuracy of the accents. Some sounded authentic, but one sounded more like a Cockney busker and one occasionally slipped more into Atlanta than Australia.

Wicked Sisters is not a wasted evening of theater ‘ there’s too much talent at work here for that to happen. But it’s not a fully satisfying one either.