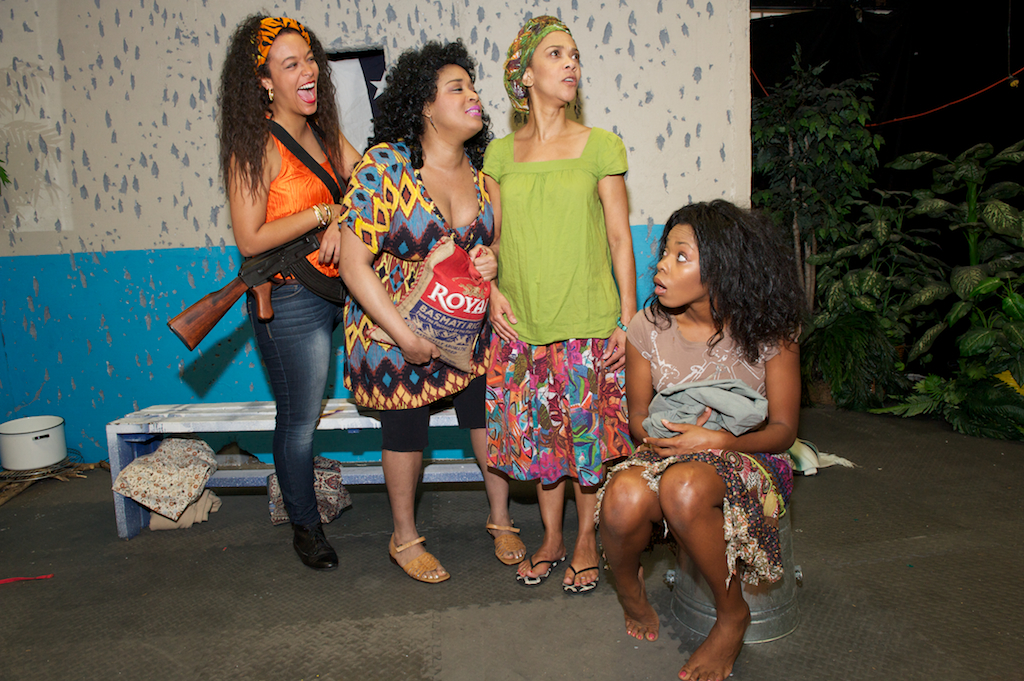 The physically and emotionally ravaged Liberian women in Eclipsed are reminiscent of raw wounds with still-forming scabs. When fresh outrages rip them away, harrowing agonies bleed out in a torrent of scathing emotion.

Dania Gurira’s script and The Women’s Theatre Project’s production may not be especially subtle; occasionally, it’s so rudimentary as to risk being simplistic.’But their ultimately affecting portrait of the intentional dehumanization of people during wartime is a shattering indictment of cruelty, especially violence against women.

Director Genie Croft and an ensemble of five fine actresses deliver an unnerving examination of the complex fallout when humanity is jettisoned as a luxury.

Gurira has set the play inside the women’s compound in a rebel camp during a 2003 uprising, a cross between a harem and prison. Decades of violence, looting and rape have deadened the citizenry for so long that the kidnapped women in the camp no longer remember how old they are, how long they have been serving the commandant as ‘wives’ (meaning sex slaves) or, in a key metaphor, what their birth names are.

Their humanity has been so eradicated that they refer to each other as Number One or Number Three, based on the pecking order in the commandant’s carnal attentions. Women-turned-soldiers have taken on noms de guerre, the completion of their metamorphosis into conscienceless robots.

The play begins as Number One (Karen Stephens), the intuitive leader of the women, and Number Three (Lela Elam), pregnant with the commandant’s child, are hiding a 15-year-old refugee under a castoff plastic tub to shield her existence from the commandant’s appetite for fresh young meat.

The terrified teen (Elvire Emanuelle in a breakout performance) is discovered and is subjected to frequent selection by the unseen commandant, making her Number Four. She seeks escape by joining Number Two (Renata Eastlick) who has become a soldier as brutal and morally deadened as the men who originally abused her.

Meanwhile, former businesswoman Rita (Carey Hart) visits the camp with a team trying to encourage a peaceful solution. She offers hope to Number One’s dream of a better life, but she is also searching for her own daughter who disappeared when soldiers destroyed her business and her life.

In a strange echo of The Bearded Lover, which’opened the same weekend, the early part of this play documents good-natured teasing that masks a deep bond of sisterhood. But events develop that force them all to make profound decisions.

Gurira, best known for her play In the Continuum, skillfully depicts vise-like conflicts such as when Number Four must decide whether to allow a young woman to be raped to death when she knows the male soldiers will substitute her if she protects the victim.

Gurira is portraying uneducated, elemental people who speak simply. But by setting up these dramatic situations, the plain words take on profound resonance. One woman, who has been in bondage so long that she has grown dependent on it, is suddenly freed. She is told, ‘You can go.’ And she replies, ‘I don’t know what ‘go’ means.

Croft has elicited gut-wrenching performances from her cast, but her staging is crippled by the tiny, tiny stage. Some key scenes are played off to the side in an area barely two yards across and a yard deep. This inserts the audience so intimately into the scene that you could reach out to intervene; it’s like watching a film closeup. But the static set up is distracting for being so artificial; the scenes would have had even more impact Croft had some room to move her characters around.

In some cases, the actresses are unable to segue as smoothly as they should from one emotion to the next, especially in the chaos of the last scene. But otherwise, the cast is solid in their soul-baring performances whether it’s Stephens’ stolid, wary vigilance for signs of the predatory commandant’s approach or her joy when Rita teaches her to write her name in the dirt with a stick. The blood freezes in sympathetic terror as Eastlick excoriates Number Four when the girl’s resolve flags in executing heinous orders. Chalk up a minor miracle that all the actresses affect a convincing, lilting African accent wrapped around intentionally stilted sentence structures.

But Emanuelle is the find. The Philadelphia native who trained at Barry University only has a handful of credits, but that will change if area directors see her in this production. We watch her evolve from a helpless victim to someone determined to escape this hell by any means possible. Then she seems to have hardened into a true believer as she parrots the rebels’ hypocritical party line, then disintegrates when she realizes the depth of her guilt for being part of the oppression, and finally she shows the confusion when faced with a choice of how to live the rest of her life ‘ never letting us forget that this child-woman is 15 years old throughout.

In a long monologue, Emanuelle becomes the audience’s surrogate as she describes her sacrifice of that prisoner to the soldiers to sidestep her own rape. Her face is suffused with terror, not at the act, but at the recognition of her own capability of enabling an atrocity. She and Gurira make us ask ourselves what we would have done.