Posted on December 4, 2010 by Bill Hirschman 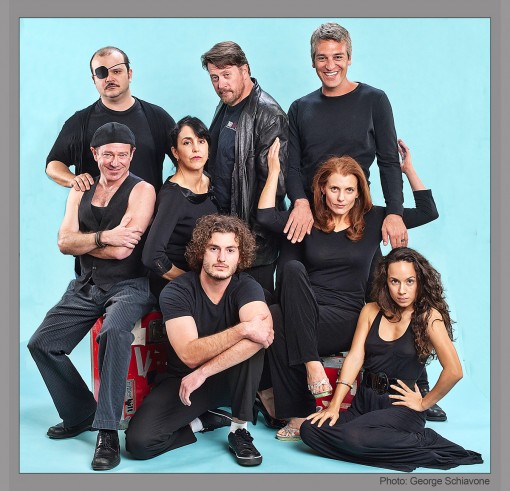 ‘Why do we work so hard to produce something that brings in so little money . . . that so few people might actually see?’ McKeever describes ancient dancers lost in an ecstatic performance that transported performer and audience alike.

‘Because they understood that in these moments of rapture, when the artist was so connected with their craft, that they somehow transcended mere mortality and touched God.’

Miraculously, McKeever and director Stuart Meltzer seamlessly weave such lyrical passages and arguments about artistic integrity into scenes drenched with witty repartee and well-timed one-liners in a biting send-up about the collision of art and commerce.

The premiere of South Beach Babylon Friday at the Arsht Center wasn’t a promising debut as the inaugural offering from Zoetic Stage—it was a promise fulfilled.

Zoetic founders McKeever, Meltzer, Christopher Demos-Brown and Stephanie Demos-Brown have created a company of 20 experienced theater artists similar to Chicago’s Steppenwolf and the idea pays off here. Because as good as the script is–and it’s one of McKeever’s best–the cast invests it with extra dimensions of passion, skill and byplay.

Credit Meltzer and the actors for lushly embroidering the dialogue with physical movements and tiny curlicues that spice up delightfully fresh line readings.

And no one excels at this like South Florida’s funniest comic actress, Elena Maria Garcia who uses contemptuous snorts, patronizing sighs and arched eyebrows to punctuate every sentence in her standout performance as a cannibalistic juggernaut of a superagent/facilitator.

Babylon depicts Jonas, a scruffy young painter (Andrew Rosenberg) who arrives in South Beach to wrestle with a painter’s version of writer’s block. But he’s arrived a few weeks before Art Basel’the ultimate smashup of art vs. commerce.

He meets three colleaues of varying fidelity to Art: Simon (McKeever) the choreographer of performance art who refuses to bow to commercial pressures and has had little financial success; Tony (Stephen G. Anthony) an inspired photographer on the cusp of a major contract who makes no excuses for it; and Chillie (Erik Fabregat) a sell-out hack who wallows in wealth and fame.

Circling around them are Lennox (Amy McKenna), a slightly ditzy but beautiful model; Semira (Garcia), an imperious, manipulative monster who long ago embraced shallowness and greed, plus two dancers (Rosie Herrera and Octavio Campos).

Jonas has dropped down the rabbit hole just as someone has begun cutting Lennox’s face out of Tony and Semira’s ads on billboards promoting Art Basel as ‘The Face of Miami.’

While these all sound like ‘types,’ McKeever’s repartee, Meltzer’s direction and the cast’s earnestness make each three-dimensional characters rather than chess pieces for a playwright.

Notably, McKenna avoids the stereotypical dumb redhead with a great body. Yes, Lennox responds to Tony’s ‘It’s like something out of Kafka’ with ‘ I don’t know what a Kafka is.’ But McKenna’s Lennox just accepts that these are crazy people who talk and act in ways she doesn’t understand. She doesn’t think that elevates them or denigrates her. It just is. 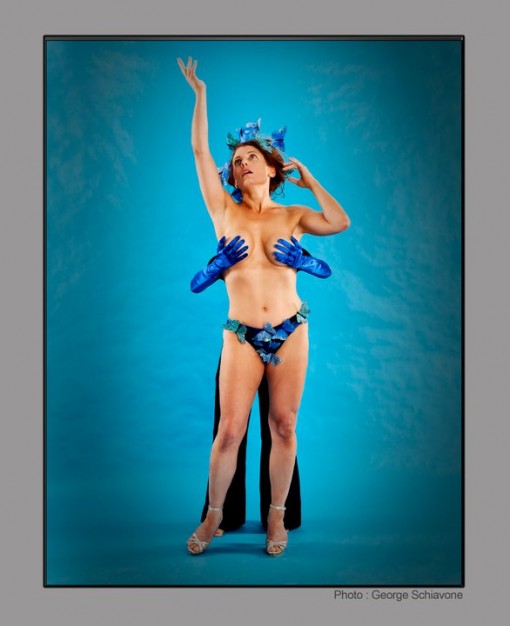 Additionally, you have to love a show that makes vicious fun of artists’ pretentious ‘explanations’ of what a piece of art means, riffs that you’ve always suspected are utter horse manure. At one point, Tony is explaining why Lennox is posing naked for a South Beach promotional photo with blue butterflies in her hair and an assistant covering her breasts with gloved hands.

Tony: ‘The concept is to show the fragility of beauty. The gloved hands represent the girl’s wings. She herself–an attractive young woman, nude and vulnerable–is presented as endangered as the butterfly. I’m trying to show that beauty, real beauty, in its most natural form is delicate and fleeting.’
Simon: ‘And this sells South Beach, how?’
Tony: ‘It doesn’t. What sells South Beach is the hot chick with no clothes on.’

If you haven’t guessed, the show has a bit of nudity, a bit of rough language plus copious sexual references that are outrageously funny but may prove a bit blunt for some audiences.

It’s a world premiere, which is almost a guarantee that some things will receive ‘fine-tuning. This iteration could use a bit of shaving, the reason for a scene or two could use clarifying and a lampoon of a performance art pas de deux is funny but it goes on way too long, letting the air out of the narrative momentum.

Someone also might argue that there is no revelatory epiphany here (‘Commercial-driven compromise poisons art’) to support a full evening, but McKeever takes us on a tour of a world of the sublime and the ridiculous populated with quirky Wonderland-like denizens.