Pig Tale Has Laughs, But Doesn’t Bring Home The Bacon 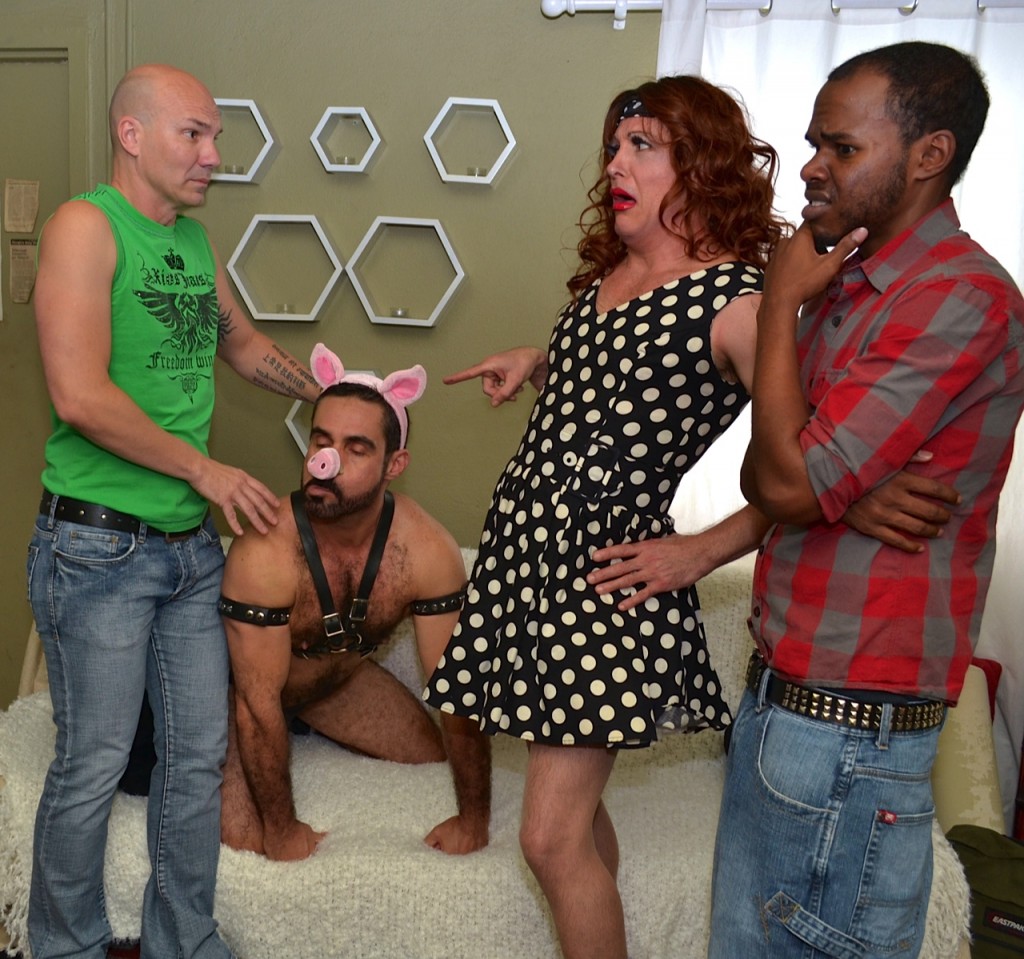 For a comedy about the magical transformation of man into a pig and how that opens up his lover’s ability to commit to true love, there’s plenty of laughs but not a lot of magic in Pig Tale, An Urban Faerie Story, now being presented by Island City Stage and Empire Stage.

Having seen director Andy Rogow’s ability to make the most of better material such as Luv at Plaza Theatre last month, it seems the blame rests on Chris Weikel’s one-joke script extended to 90 minutes and a weak cast who (with one notable exception) are just passable.

But if the end result isn’t enchanting, Weikel’s one joke is, indeed, funny and undeniably produces enough chortles and belly laughs that the audience doesn’t feel cheated.

The humor is intentionally sophomoric, although not the sublime silliness of, say, Animal House. When the transmogrified porcine has trashed an apartment, his lover exclaims without a thought, “Were you raised in a barn?” Or when the lover tries to explain to the porker’s last employer over the phone why he’s been absent, he vamps, “He’s been sick. Seriously sick….Swine flu.”  The lines are funny enough, but they would probably sound a lot funnier delivered by a more skilled comedian who’s in on the joke.

The story follows Johnny (Jobe Anderson), who dreamed of being a serious artist like Edward Hopper, but has settled for a lucrative career creating ad campaigns. Recently, he has been cementing a strictly sexual relationship with Dave (Angel Perez), a hirsute Latin hunk with a taste for leather including underwear with a zipper up the back. Before the play starts, Johnny argues with a transvestite practitioner of Santaria, Mama Truth who may or may not have muttered a curse.

So when the two men finish their foreplay in the apartment, they couple offstage to a soundtrack of groans, sighs, a sudden loud “Holy f**k!” — and the Twilight Zone theme. The lights rise and Dave has turned into a real live oinking porker, sporting a pig snout and clomping about on cloven hoofs.

Not wishing to abandon Dave, Johnny turns for help to his ditzoid buddy Kyle (O’Neil Delpenha). Unfortunately, the wide-eyed Kyle’s knee jerk advice is limited to Johnny should stop frequenting the gay dating site Manhunt and “stay with the reliable” pickup spots: “bars, toilets and the Lincoln Center library.” Sensing that Johnny and Dave are trapped in a fairy tale, Kyle searches the seminal text by Bruno Bettelheim, but he never finds any help.

Another source of guffaws is Rogow and sound designer David Hart’s choice of music during the scene-changing blackouts that comment on the previous scene: “Black Magic Woman” after Mama Truth’s first scene, “So Happy Together,” “A Whole New World” and a wryly delivered “Old MacDonald Had a Farm.” Weikel also wrote into the script a hilarious if extraneous rendition of “Green Acres” by Mama and Kyle.

The script’s many problems include that Kyle has several scenes consulting the Bettelheim book (and an Iron Man comic book), but plot wise none of this pans out and his solo scenes are pretty pointless. Further, we never ever find out how or why Dave turned into a pig, let alone why a pig. It turns out to have nothing to do with Mama Truth.

In theory, the show is supposed to depict how this really odd couple grows on each other and how Dave eventually brings out Johnny’s capacity for true love, although this is never even hinted at until the last 10 minutes when the foundation should have been laid clearly in the first scene so we could chart Johnny’s growth.

The truth that Mama Truth delivers when she appears on stage is how low-energy the show has been. When actor Larry Buzzeo comes on in full high drag like a deranged Carmen Miranda and sporting an accent that would embarrass Ricky Ricardo, the energy level amps way up thanks to Buzzeo’s courageous all or nothing acting. Stereotype be damned, this is the funniest part of the evening.

Anderson is likable enough, if not especially memorable. But we never feel his character growing. Delpenha, a young New World grad, brings a daffy vibe and bit of wacky energy to his Kyle, but he never strikes you as anything other than a cartoon for other characters to talk to. Perez is not especially convincing when he speaks in the early scenes as the hedonistic denizen of leather bars. Surprisingly, he is much more effective after the transformation with a plastic snout stuck on his face and his lines reduced to grunts. His sad eyes reflect Dave’s pain and confusion, and his body language mirrors that of the cat or dog roaming your living room. Only Buzzeo, a standout in several productions at Slow Burn Theatre’s musicals, is up to the material.

Island City Stage is the re-engineered Rising Action Theatre that folded early last year. Both focused on bringing gay-centric LGBT theater to South Florida, but this second production of its existence has an interesting virtue. The fact that all the characters in Pig Tale are gay provides a lot of humor and a good deal of homosexual necking. But thematically, their sexuality has nothing at all to do with the play. And that’s laudably refreshing in a weird way. This is just a playwright writing about the difficulty of relationships, just human relationships, and he’s just writing about the world he knows. Weikel never seems to be trumpeting some clichéd Lifetime Movie Special entitled Gays Are People Too.

But as a thoroughly satisfying message comedy like a Paul Rudnick or Douglas Carter Beane can deliver, Pig Tale has a long ways to go. Still, if all you’re looking for is some laughs, as the farmer told Babe, “that’ll do, pig.”

Side notes: Empire Stage had a reputation last year for leaving audiences in sweltering conditions, but kudos for installing an effective air conditioning system. Now all they need are seats not borrowed from the Spanish Inquisition. Also, if this play appeals to you, get tickets quickly. The house is tiny and opening night was sold out.

One Response to Pig Tale Has Laughs, But Doesn’t Bring Home The Bacon