Pigs Do Fly Gains A Little Altitude In Curly Tales 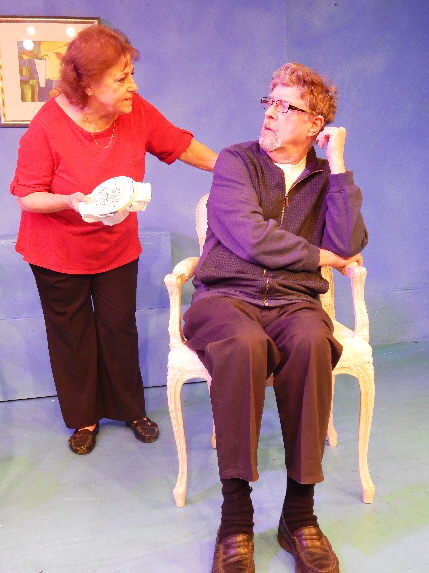 Getting old, or older, is not for sissies, the saying goes… but it’s easier if you can laugh at it and if you know you’re not going crazy all alone. The second half of that is the unspoken maxim beneath Pigs Do Fly Productions as it enters its third season with its newest entry, Curly Tales.

The Fort Lauderdale troupe selects short playlets about the second-act lives of people over 50 years old and produces them with a cast of 50-plus-ers and primarily for an audience eligible for their AARP card.

Initially, the plays were unabashedly comic, although the level of performance and writing was variable, to be polite. Over time, the selection of raw material has improved in part because the choices while still droll, often say something meaningful about the maturing process.

So it is with Curly Tales, another step forward and upward in the company’s evolution, although it still is seriously hampered by performances of a repertory troupe that range from competent to strictly amateur hour, despite two imaginative directors Elena Maria Garcia and Gail S. Garrisan.

The effect is an evening that is a transitorily diverting hoot, but not very memorable.

The show opens with The Nude by W. L. Newkirk, directed by Garrisan, a wry piece in which Claire (Brenda Aulbach) attends the opening of an art exhibition by her friend Lisa (Elissa D. Solomon) who has found painting to be the fulfilling facet that was missing from her life. Attracting the most attention is a nude painting of Claire admired by a lawyer (Harry Marsh) and disdained by an art critic (Stanley Ross.) Claire’s initial embarrassment leads to a promising relationship.

Yours and Mine, by Glenn Alterman, directed by Garrisan, a cute number in which a long-married couple (Carol Sussman and Kerry Sensenbach), whose relationship has been going stale with both pursuing their own interests, suddenly finds that their secret pursuits of artistic expression may hold their future.

Land the Music, written and directed by Garcia, in which aging weekend cover band members (Marsh and Sensenbach), who fear the current music scene has passed them by, find a fan (Aulbach) with a proposition.

Flowers, by Sheila Cowley, directed by Garcia, depicts three friends Aulbach, Sussman and Lynn Simmons Chvotlin, having afternoon tea at a home next to a cemetery.

The Dove, by Joshua Fardon, directed by Garcia, features another long-married couple (Solomon and Ross) who try to liven up their relationship at bedtime with what may be a duel of true confessions or simply an exchange of very inventive tall tales.

The Mating Season of Flying Monkeys, by Ann R. Wuehler, directed by Garrisan, depicts maiden sisters who have lived relatively uneventful lives together. As they acknowledge their age, one is satisfied to stay home (Chvotkin) but her sibling (Sussman) wants to break out and pick up someone at a bar.

Finally, the funniest piece of the evening is Politically Correct Police, by Larry Parr, directed by Garcia, in which matronly diva Chvotkin tries to give a recital of “Old Man River,” but is forced to alter virtually every phrase by PC Policeman Ross.

It’s all gentle fun and the audience seemed pleased, but a lackluster quality pervades the evening, making you wish someone, even you, had taken a shot of Red Bull before the lights went down.