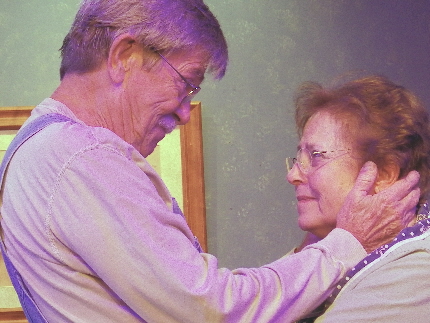 The mild chuckles and knowing nudges among audience members seemed more frequent in Flying High!, the fourth Pigs Do Fly Productions outing of new ten-minute plays by, for and about the over-50 crowd collectively coping with the onset of late middle-age and beyond.

The reaction is due in part to the recognition by the audience of the scenarios sketched out in the seven stories from truly lasting love to artificially lasting erections.

But the truth is that the writing seems a little sharper, the direction more incisive and the acting a bit more credible. Some of the playlets still are a bit lamer than others and some still limp along a bit, but there’s a noticeable uptick in the quality of this evening meant to provide a quiet, gentle smile. Additionally, the plays chosen in part by executive producer Ellen Wacher have been limited to broad farces in the past; this time, she has selected a couple of edgier, even melancholy scripts.

The plays in order are:

The Rock by Miriam Kulick, directed by Garrisan: Solomon and Warfield are on a nature hike that Solomon hopes will heal Warfield who has undergone several personal tragedies. While crossing a stream, Warfield gets physically stranded on a rock. Solomon tries to coax her off, seeing the very obvious parallels to Warfield’s impaired ability to take risks anymore. It’s a pretty heavy-handed metaphor for mid-life paralysis, but it’s somewhat leavened with humor including the women singing the empowerment anthem, “I Am Woman.”

Standing Tall, by Marv Siegel, directed by Garrisan: An out and out farce about an older couple, Sussman and Gibbons, trying to decide what to do when that laughable situation in the Viagra advertisement warnings actually comes to pass.

Hail Kale, by Carol White, Directed by Garcia: Warfield and Caster are on a disastrous blind date with Chambers serving as a waiter with an attitude. All three supplement their public dialogue with private thoughts. This one was only mildly entertaining and had a lame predictable ending.

Exchange, No Returns, written and directed by Garcia: This single-premise one-joke play still registers as somewhat cute as a 50-something Solomon approaches what must be a metaphorical, mystical returns desk manned by Sussman. The “customer” wants to exchange her current life for a new model that works better and has more promise.

Dream A Little Dream Of Me, by Caster, directed by Garcia: This pleasant little number has two lifelong friends, married to other people, enjoying an evening at a local bar. Chambers makes the uncomfortable misstep of telling Warfield that he had a dream last night in which they were making passionate love. The cast, director and script wryly explore the questions whether friends of opposite sexes can really be platonic.

Coming Through, by Pamela Schueler, directed by Garrisan: Not at all a comedy, this wistful playlet was one of the most emotionally satisfying pieces. Schueler depicts an elderly widow living on an isolated family farm when a city official (Caster) informs her that the government project to build a highway is going to buy her farm through eminent domain no matter what she wants. She objects that the land is precious to her as her last connection with her late husband, but the official leaves her with no choice. But there is one other. Sussman, armed with Schueler’s lovely prose, gives the finest performance of the night.

Stuck, by David Susman, directed by Garcia: A wry little comedy about an upscale couple minutes away from hosting a tony party in their home suddenly discovers that a delivery man has been mangled in a new over-sized sex toy in their bedroom. Under the humor is a bit of a message about long-married couples finding the need to “un-stuck” the predictability of their relationship.

One Response to Pigs Do Fly Gains A Bit More Altitude With New “Flying High!”