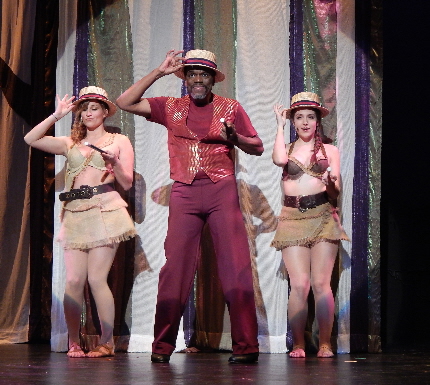 It’s an illusion you can blame on those lush spectacles at the Maltz Jupiter Theatre, the Wick Theatre and Actors Playhouse. Their highly-visible resources make productions with much smaller budgets such as Boca Raton Theatre Guild’s Pippin seem to be missing something – when, in fact, these modest offerings have outstanding elements that are just as fine as those found in better heeled-companies.

BRTG’s edition of many Boomers’ favorite musical boasts standout and satisfying performances by Reggie Whitehead as the sinuous, sardonic leading player, Mike Westrich as the titular hero seeking meaning in his life and Patti Gardner in one (or is it two) vibrant roles that elevate the bar anytime she’s on stage.

Some physical aspects aren’t in the same praiseworthy category as Ron Hutchins’ lively choreography or Paul Reekie’s deft musical direction. But director Keith Garsson has produced an enjoyable rendition of the 1972 Stephen Schwartz/Bob Fosse hit that is currently enjoying a reimagined circus-infused revival from director Diane Paulus on Broadway.

In this case, the travelling troupe of players regaling us with an irreverent and ribald tale is firmly set in the actual time period when Prince Pepin was in line to succeed Emperor Charlemagne for control of the Holy Roman Empire. Pippin seeks his “corner of the sky” through exploratory experiences all of which prove unsatisfying. Meanwhile, this troupe seduces him toward walking into a fiery pyre as the ultimate expression of his extraordinariness – and put on a good show for them.

Some moments are as thoroughly entertaining as you could ask for. The show-stopping number – it almost always is – is the sing along anthem “Time To Start Living,” sung by Pippin’s feisty and lusty grandmother, Berthe. The playbill attributes the role to the BRTG debut of the elderly Swedish actress Sue Kaplan – who remarkably looked a great deal like Patti Gardner in a grey wig. Whoever she was, the verve and vitality pouring out of Ms. Kaplan and the chorus surpassed the rest of this show and a few others put together.

The choreography by Hutchins (just off the Wick’s 42nd Street) retained a bit of the Fosse flavor – the classic vocabulary of bent arms, jazz hands etc. – but most of it was his design and he reaffirmed his position as one of the region’s most talented hands. Again, he is working with a troupe of varying abilities, but he has gotten them to throw themselves completely into the work. Still, only Whitehead and Gardner noticeably brought the crispness to their dancing that indicates an experienced terpsichorean performer. Westrich, who has been upfront that he is not a trained dancer, did a passable job and if he was a touch less agile, that fit Pippin’s discomforted persona. Besides, nobody would look great dancing next to Whitehead; that alone takes guts.

That’s because three-time Carbonell winner Whitehead once again delivered polished assured dancing melded with a gleaming grin and a deliciously jaded singing voice of a charismatic narrator who has seen it all. It reminds observers of his triumphant “The Vipers’ Drag” dance solo that he has performed in several productions of Ain’t Misbehavin’. If he and Hutchins are channeling their spin on the original steps and vibes of Ben Vereen and Fosse, so what?  Sit back and savor it.

Westrich has been steadily making a reputation in dramas (Island City Stage’s The Timekeepers) and musicals (Outré’s tick…tick..BOOM! and the Plaza’s I Love You, You’re Perfect, Now Change). His strong clear voice and his sincerity are essential to keep the hero from distancing himself from the audience because Pippin is frequently a selfish callow fool. Instead, Westrich plugs into the yearning that every emerging adult during the past 6,000 years has felt for finding their special role in the world – something they don’t realize that 90-year-olds feel as well.

Even after watching Gardner for nearly 20 years now, it’s still difficult to analyze how she does what she does. Few of her characterizations in dramas, comedies or musicals seem cut from the same cloth. For example, she’s currently nominated for two Carbonell awards: one for her murderess Roxy Hart in BRTG’s Chicago and another for her off-beat urbanite in GableStage’s Sons of the Prophet. What all of her work shares, besides talent and skill, is a vibrance, an honesty and a slightly sideways approach to most of her characters.  Here she creates Queen Fastrada, one of the most conniving and sexiest stepmothers in any Broadway musical.

The show Pippin has a troubled history and a better reputation than some feel it actually deserves. It was a success initially because of a terrific pop score enshrined on the original cast album, a dazzling production and a timely connection with a sort of post-Hippie zeitgeist. But creative clashes erupted among composer Schwartz, 500-pound gorilla Fosse (who banished Schwartz from one rehearsal) and bookwriter Roger O. Hirson about how cold or heartfelt the show should be. In subsequent productions, Schwartz regained control and the troublesome book has been reworked multiple times, especially the ending and the tone, which never again was as dark and gleefully sleazy as Fosse insisted upon. The current ending finally feels quite right, although a few audience members audibly longed for a big musical finish – which, of course, would have undercut the whole point that real life doesn’t work out as cleanly as fairy tales.

Director Garsson has made some terrific choices and some problematic ones. His casting of the leads is near perfect and he has coaxed musical performances from them that are first-rate. He has imbued the production with the irreverent tone that the piece demands. For instance, the tender love song “With You” is played out against a series of experiments in copulation. Garsson and Hutchins added droll touches such as having the Les Miz-like revolutionaries wave above the mob what is clearly the flag of Florida.

On the other hand, his staging was static and lackluster including placing actors and crucial props (like the immolation platform and the talking head scene) where they could not be seen behind virtually opaque scrims (an oxymoron, I know).  Some scenes didn’t land strongly such as the soft shoe performed by Whitehead and two dancers as war rages behind them.

Most of the supporting cast is laudable as well. Leah Sessa (Westrich’s partner in the Plaza show) doesn’t make a solo entrance until the second act as Catherine, the young, beautiful widow who takes in the disillusioned Pippin and revitalizes his life. But she instantly earns her spotlight with a droll, knowing, irresistibly lovely persona – not to mention an even lovelier voice. Troy Stanley is a massive looming presence with a sonorous baritone as Charles and he captures the extreme pragmatism born of decades of experience. Conor Walton is delightful as the preening peacock brother, the war-loving Lewis. Justin Cooke is Theo, Catherine’s taciturn child.

On the debit side, the set design by Terry Lawrence was not particularly impressive, partly a factor of budget. But the aforementioned scrims were a bad idea that should have been spotted as not working about 20 minutes into technical rehearsal. We’re guessing that there was a mechanical malfunction Sunday that explained why the stage right scrim extended six or seven feet onto the stage while the stage left one only came out a couple of feet.

The most bizarre aspect was Alberto Arroyo’s costume design, which Garsson signed off on. Presumably it was meant to evoke the Holy Roman Empire, but the men’s costumes looked like the set up to a joke: “So Fred Flintstone walks into a leather bar….”  The women’s costumes seemed stolen from that Raquel Welch prehistoric dinosaur movie. Pippin is forced to wear a shaggy rug of a wig for some reason.  Only Gardner’s Masters of the Universe costume for Fastrada is at all flattering.

Tom Shorrock’s lighting was also off base, starting with scenes behind the scrims so dimly lit that the action was nearly invisible. Actors sometimes started their solos in weak light until somebody remembered to turn on a spotlight, and there were dozens of missed cues on the Sunday matinee we saw. Of course, it would help if some actors actually walked into the light that is provided for them.

Paul Reekie blended the voices together and led the band that included Martha Spangler on bass, Jeff Renza on drums and Glen Rovenelli on woodwinds. Considering that most of the audience knows the score from the orchestra on the album, his re-orchestrations sounded surprisingly full. Whether it’s in the score or Reekie’s idea, notice how the woodwinds play a bluesy klezmer-sounding passage anytime the characters invoke Jesus or Christianity in their bloody pursuit of warfare or power.

Small budget or not, Garsson and company (which just earned five Carbonell nominations)  have produced a fairly entertaining edition on its own terms that benefits from brio and gusto.

In the Bad Audience Behavior Department: Why is that some people think that the seat assignment on their ticket is optional? Does it never sink in that when the actual seatholder arrives, there’s going to be considerable sturm and drang as they have to get up and move around, often in the dark after the show has started. One lady sitting near us had to move twice until she finally settled in the seat she was assigned. One doyenne at another show recently was faced with the person actually assigned to the seat she was occupying and pressured him to sit somewhere else.

One Response to Pippin May Feel A Bit Threadbare, But BRTG Delivers Vibrant Performances