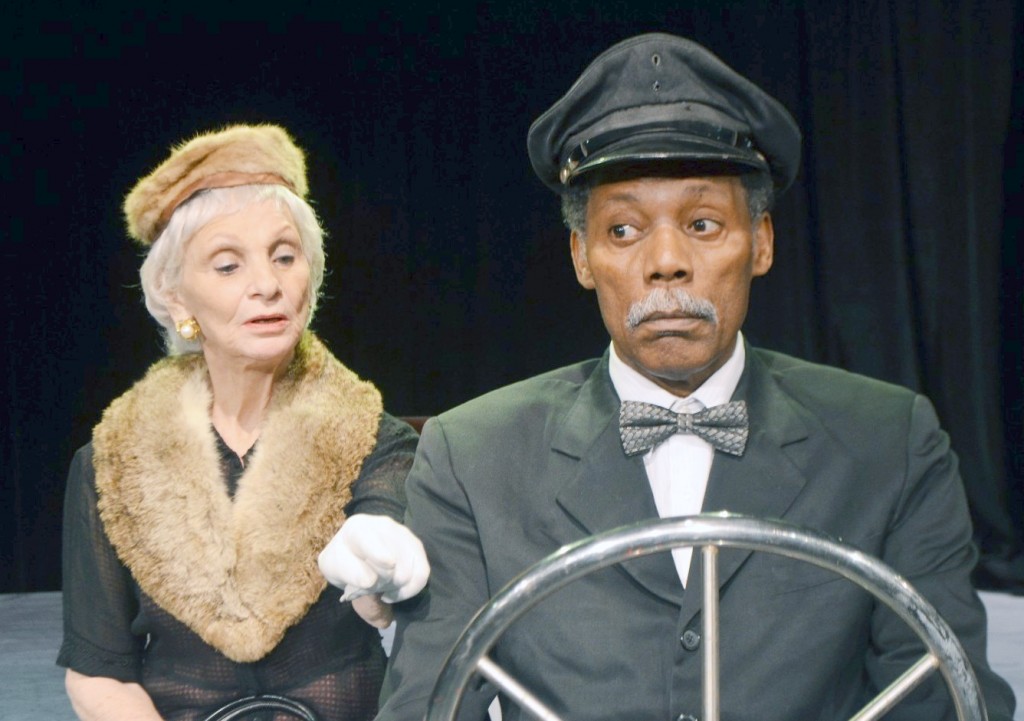 The most affecting moments in the Plaza Theatre’s solid, entertaining production of the venerable Driving Miss Daisy are the fleeting grace notes that have no dialogue, moments that result from being in the capable hands of old pros.

A middle-aged son moves his elderly mother’s walker out of the way and his face betrays the realization that the ravages of old age may be his fate as well. Or the beaming affection between the retired chauffeur Hoke and his fading client Miss Daisy as he feeds her a slice of pie. Or the climax when, after discovering in horror that her mind is beginning to fray, Daisy takes Hoke’s chocolate-colored hand in her pale white one as an affirmation of their friendship.

That’s not to say that this edition is the deeply moving comedy-drama that Alfred Uhry’s warhorse can be, but when you’ve got first-rate talent such as actors Harriet Oser, John Archie and Ken Clement led by the experienced director Michael Leeds, you’re pretty much guaranteed a production that delivers all the charm and chuckles if it never quite reaches the category of magical.

We didn’t mean to give away spoilers a moment ago, but it’s unlikely too many theatergoers have missed some incarnation of this gentle comedy from 1987, even if it was the 1989 film. For those few, Daisy traces the prickly relationship in postwar Atlanta between the 72-year-old doyenne of a well-to-do Jewish manufacturing family (Oser) and the slightly younger African-American chauffeur (Archie) so desperate for work that he agrees to usher around this curmudgeonly client.

Daisy’s bourgeois son Boolie (Clement) has taken Daisy’s car keys after an accident and hired Hoke to ferry her around. Feisty to a fault, the former schoolteacher is so proud of her independence that she rejects needing anything from anybody. If getting old ain’t for sissies, the inevitable might want to get out of her way, at least for the time being.

With restrained sentimentality simmering under the surface, Uhry deftly paints the gradually evolving friendship in a series of episodes spread over more than 20 years. This is also another of Uhry works (such as The Last Night of Ballyhoo and Parade) about Jews trying to assimilate in anti-Semitic Atlanta and the slow change in race relations in the New South as ethnic groups clumsily stumbled toward an uneasy symbiosis.

Shakespeare this isn’t, but Daisy is a finely crafted entertainment with some messages that are never hammered at you, just sidled up to such as Daisy’s transition from unthinking prejudice (“They all steal”) to having Hoke drive her to a banquet supporting Martin Luther King (but not asking him inside until the last moment).

Leeds has done a commendable workmanlike job moving the story along and guided the pros in discovering their performances. Besides the aforementioned grace notes, the moments that work best are when the protagonists’ true feelings peek uncontrollably through the roles that society has dictated for them: Daisy’s unguarded joy when Daisy gives Hoke one of her fifth-grade textbooks to help him learn to read and he sounds out the title, or Hoke’s sly smile when he negotiates a raise from Boolie by leveraging a job offer from another family.

Leeds also choreographs a nice bit of physical comedy of arms flailing and bodies leaning in as Daisy the long-retired teacher forces Hoke to dope out the spelling of a name when she discovers that he is illiterate.

Archie has been a mainstay of the region’s acting core, most recently in a procession of old coots such as the unhinged but truth telling sage in Mosaic’s Radio Golf and the crotchety father in M Ensemble’s Harlem Duet. His Hoke echoes those roles with that high scratchy voice and – in this case—an era-appropriate if unnerving attitude that sounds like smart-enough-to-sound-subservient Eddie “Rochester” Anderson in the old Jack Benny show. Archie carefully walks that line of a 1950s minority who must “know his place” to avoid a lynching, yet who nurtures a pride that can be violated only so often and so far. Archie closes off more than a few scenes with a dry, droll Stepin Fetchit  “Yes’m” that barely conceals a verbal middle finger.

Oser’s portraits hanging in the gallery of theatergoer’s memories are finely-detailed trompe l’oeil paintings that look like reality but are carefully crafted creations. Just last season, she was both the fiery grandmother in Caldwell’s After the Revolution and the senile boarder in Palm Beach Dramaworks’ The Effect of Gamma Rays On Man-In-The-Moon Marigolds.  Oser has longed to do this part for years, especially with Archie, and she grabs the opportunity. Oser sidesteps all the potential pitfalls for a stereotypical performance, starting with an energy and spirit that delivers Daisy’s flintiness and pride. She also excels at portraying Daisy’s gradual aging and the encroaching infirmities. The Plaza’s senior audience will likely be unnerved by Oser’s sole emotional outbreak when Daisy’s mind first cracks.

The supporting part of Boolie isn’t much of a challenge for Clement who just came off the exhausting tour de force at Mosaic Theatre in the titular The Diary of A Madman. But Clement never gives a half-performance and he has an unheralded talent that many, many actors lack for quietly inhabiting secondary characters so that they have a full-fledged persona rather than simply serve as a plot device, such as his husband in Actors Playhouse’s Becky’s New Car.

Save some credit for producer Alan Jacobson whose fledgling company has mounted small cast musical revues since it opened in February at the old Florida Stage space in Manalapan. He’s stepping up its game by adding in three straight plays this season and for this one, he has hired three top-flight actors who could not be better cast, brought in a fine director, even sprung for a serviceable set, costumes and lights when he could have scrimped by with a minimalist production.

This isn’t the most nuanced or multi-layered production of Daisy you’ve ever seen, although you can bet it will deepen during the long run. But with these folks in charge, you won’t be disappointed.

Driving Miss Daisy runs through Nov. 18 at The Plaza Theatre, 262 South Ocean Boulevard, Manalapan (the Ocean Blvd. bridge is closed for two years; come across the Intracoastal Waterway by Lake Road on the north or Boynton Beach Blvd. or Woolbright Road on the south, allow a little extra time for slow traffic on A1A.) Performances 7:30 p.m. Friday-Saturday, and 2 p.m. Saturday-Sunday. Tickets $45.  Call (561) 588-1820 or visit theplazatheatre.net.