Powerful, Fresh Reimagining Of Les Miz Is Ready For Broadway 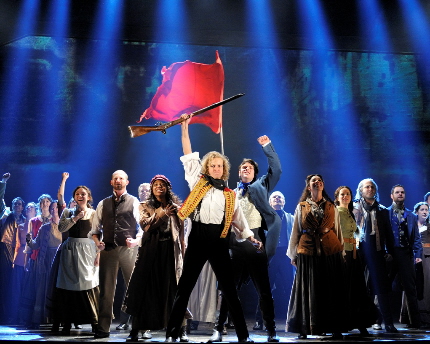 The 25th anniversary revival of Les Misérables that has been on the road more than two years is finally heading to Broadway in 2014. The mainstem producers could do no better than transfer this fresh, powerful iteration currently playing at the Arsht Center lock, stock and barricade.

One of the dirty little secrets of long runs, especially those of national tours, is that that they often deteriorate over time, even though personnel are replaced every six to nine months. But this tour inexplicably has taken a fresh, moving reinvention of the warhorse – completely restaged with new scenery, lights, orchestrations – and has actually improved it since it played the Broward Center in January 2011. Theater lovers who stay away, saying under their breath “Les Miz, again?” are cheating themselves.

The 600-pound gorilla in the room, actually the $61 million gorilla, is the film version that just picked up three Oscars on Sunday. But this feels like a middle finger salute to the film as if to say, this is how it’s done. Start with the fact that every single person in the 30-member cast down to the smallest ensemble role sings better than anyone you’ve seen in the film clips.

Then add in the inventive highly theatricalized staging by co-directors Laurence Conor and James Powell, plus the work of musical director Lawrence Goldberg and musical stager Michael Ashcroft. They have dove back into the meat of the story and gotten the cast to sing the well-worn score as if it was a unknown piece that just came in the mail.

The evening has a propulsive, cinematic flow that almost moves too quickly. It helps to know the plot inside out because the pacing seems fueled by amphetamines and the lyrics occasionally get lost in the headlong rush despite the sterling sound quality.

Mix in superb stagecraft such as Paule Constable’s ever-shifting, atmospheric lighting. There is no turntable and there aren’t John Napier’s Transformers-like pieces that pirouette into barricades. Instead, designer Matt Kinley has augmented evocative set pieces with images inspired by Victor Hugo’s own impressionistic pen-and-ink drawings. Fifty Nine Production has turned them into projections that resemble Gallic-flavored  J.M.W. Turner paintings and employed them ingeniously such as having sewer tunnels receding and moving as Valjean carries Marius.

And the voices, the impassioned, expressive voices. Gone is the annoying whiny quality that characterizes so many renditions of  “I Dreamed A Dream,” “Empty Chairs at Empty Tables” and other dirge-like laments.

Instead, there’s Peter Lockyer’s full rich sound for Jean Valjean, bringing his own coloring and phrasing to “Bring Him Home,” diving deep into the baritone range and soaring up to a pure falsetto.

Andrew Varela, who played Javert at the Broward Center two years ago, is back in harness sounding even richer. His rendition of “Stars” digs deep into Javert’s inflexibility and his final “Soliloquy” makes credible Javert’s agonized deliberation toward suicide. Watching Varela on both numbers is like watching a home run slugger smash one out of the park.

The same can be said of every actor: Genevieve LeClerc’s Fantine makes “I Dreamed A Dream” touching rather than saccharine, Devin Ilaw’s Marius whose gorgeous voice triumphs over the sappiest songs in the score as does Lauren Wiley as Cosette, and amazingly, Briana Carlson-Goodman is a genuinely affecting Eponine who simply nails the usually insulin-shock producing “On My Own.” Shawna M. Hamic and Timothy Gulan create grotesque gargoyles out of the Thenardiers, broadly funny but also chilling in their venal pragmatism.

The 16-piece orchestra led by Goldberg plays Christopher Jahnke’s new orchestrations so the familiar score sounds as if your ears have never heard it before: bright, clear, muscular, soaring, swelling and driven with every percussion instrument in the storeroom.

The sung-through score by Alain Boublil and Claude-Michel Schönberg is still stirring, and the English lyrics by Herbert Kretzmer still stumble regularly into the most prosaic poetry written by anyone other than a lovesick high school senior.  And tucked deep inside it are Hugo’s themes of living a holy life despite the apparent silence of God and realizing as the lyric goes “to love another person is to see the face of God.”

This Broadway Across America edition is not some cynical attempt to wring just one more quart of milk from the cash cow. Instead, this is a legitimate revival in the deepest sense of the word that is as vibrant, passionate and new-born as a world premiere.

To view a promotional video with an earlier cast, click here. 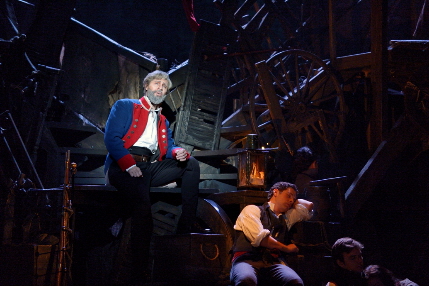 One Response to Powerful, Fresh Reimagining Of Les Miz Is Ready For Broadway