Powerful Performances, Direction Make New City’s ‘Raisin In The Sun’ A Must See 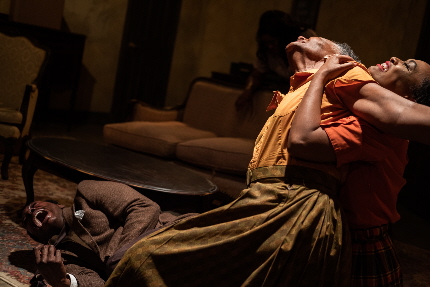 Jovon Jacobs, Carolyn Johnson and Yesenia Ozuna in a crucial moment in New City Players’ A Raisin in the Sun / Photos by Ryan Arnst Photography

In a theater that was created from a church just off Andrews Avenue in Fort Lauderdale, sit back and get transported, and you really will be, into early 1950s South Side Chicago. This is when milk came in bottles and was delivered along with the newspaper to the porch. When kids needed 50 cents for lunch and took their books to school slung over their shoulders with a rubber strap.

And when there wasn’t such a thing as so-called political correctness; when African Americans were called colored and Negro.

New City Players production of Lorraine Hansberry’s A Raisin in the Sun is steeped in shades of browns – tan walls close in the tenement apartment in the scenic design by Conner Reagan. On a stage right wall, some of the white wood underneath shows through, a tattered couch is dimly rose colored, even the costumes by Leslie Cook mostly live in the same sepia-colored world. The only set element with any color is the green plant that sits outside a dusty window, which adds a splash of life to the room when Mama brings it inside to give it some water.

There’s a reason to bring up all this detail – including coffee steam wafting out of cups instead of a usual play pantomime of liquid in a bottle – beer gets swigged and splattered, scrambled eggs get made on a real, hot stove. When Mama opens the window, noise from the street below comes through, on cue; and when she shuts it, on cue, it stops.

NCP has placed their audience in four rows, and we face the apartment, proscenium style. It’s a different staging than I have seen before at the Vanguard, and it works. It’s intimate yet creates enough distance to make you feel like a fly on the wall, peering into lives filled with hopes, dreams, and much disappointment and despair.

It’s this attention to detail in each element of NCP’s Raisin that makes it truly spectacular on every level, and, yes, that especially goes for the directing and the acting.

“Classics have always been on our list to do,” says Tim Davis, producing artistic director of New City Players. “That said, we wanted to get back to our mid-century roots, and capitalize on the Clybourne Park connection from last season.” Last April, Davis directed Bruce Norris’s Clybourne Park, written in 2010 as a spin off to Hansberry’s play.

This is the world and the rented apartment of the Younger family. There’s Lena “Mama” Younger (Carolyn Johnson), the matriarch of the family. With not enough bedrooms for the family, she shares her room with daughter Beneatha (Yesenia Ozuna), a college student with ambition to become a doctor. As the play opens, it’s another day in the Younger household. Ruth Younger (Rita Joe) needs to get her boy off to school. His bed is the couch as there is nowhere else for him to sleep, and the bathroom is in the hallway, obviously shared by other tenants.  Ruth’s husband, Walter Lee (Jovon Jacobs), who works as a chauffeur is off stage, in the couple’s bedroom.

But there’s an excitement this morning in the Younger household. There’s a $10,000 insurance check paid to Lena upon her husband, Walter Sr.’s death, and it’s going to change everyone’s lives.

While Raisin is one of those plays that’s been done and done again, seen many times, there could be an inclination when staging it in the 21st century to imbue some contemporary commentary in the approach. But, as director Mary Elizabeth Gundlach wisely chooses, she doesn’t fuss with the modern classic, but revels in its ability to stand on its own. She proves here that’s it’s more than worthy.

Each line in Hansberry’s play is treated with reverence. There are, among the main players, no throwaway lines, nothing cast off. Each word has a depth of meaning.

The ensemble is magnificent, playing the piece as an ensemble, yes, but also digging deep into their characters’ individual wants. Johnson as Mama has the usual effortless style she’s exhibited in so many winning characters she’s played at M Ensemble and with other area theaters. But here she gives a tour de force. She’s never “acting” Mama but living her heart and humility. The portrayal is authentic to the core. The emotional level in which she relates to each of the other characters is something to study as well.

Joe’s Ruth — worn out yet trying to hold her marriage and her family together – finds the emotion buried within the character. When she wraps her arms around her husband, the want is very real.

As Walter’s sister Beneatha, the character based on Hansberry herself, Ozuna finds and revels, without overdoing, the vast scale of Bennie – the flippant college student, the defiant philosopher, the comic, the radical, the lost girl. She finds the realism in Bennie and the audience drinks it in.

Jacobs is a desperate Walter Lee, never relying on the words to carry his performance but digging into every single raw emotion. When he loses control, crumbling and sobbing on the floor in one of theater’s most visceral moments, you feel it in your own guts. His portrayal is sheer artistry.

Playing dual roles of the Nigerian, Joseph Asagai, and uppity George Murchison is Roderick Randle, who finds a way to bring each a uniqueness, and, as Hansberry so wanted, to show polar opposites in Bennie’s suitors. Ryan Maloney is the stuffed shirt Clybourne Park Association representative and the only white character in the play. His Karl Lindner relies on caricature, which seems to stand apart amongst the other such natural portrayals present in the cast.  While Linder has conviction in his beliefs, the actor doesn’t put that across; it feels like a caricature. As Walter Lee and Ruth’s 10-year-old son Travis, Aaron Jacques zips too quickly through his lines rendering them inaudible. Jean Hyppolite briefly appears as the nervous, stuttering friend Bobo who delivers bad news to Walter.

As Hansberry said: “In order to create the universal, you must pay very great attention to the specific.” Her words ring true in this production. The specifics and attention to so much detail creates moments upon moments in NCP’s Raisin in the Sun, and in so many instances, every one of them shines.