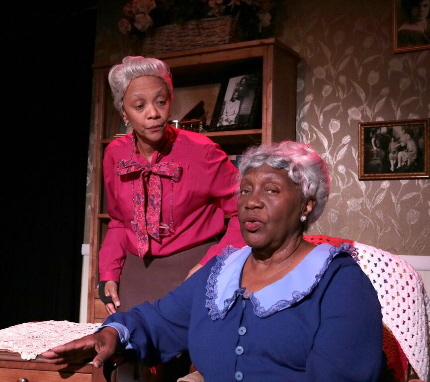 In March of 1985, in the Los Angeles Times, Elizabeth Mehren wrote, “Even in this era of Gray Power and nominal anti-ageism, something happens to women in the theater as they slip past 40 and slide toward 65, [playwright Elsa] Rael insists: ‘They are absolutely the most underemployed group in the theater.’”

Anecdotally at least, little has changed in the past 34 years. Roles for older actresses are still so comparatively scarce that one South Florida company, Pigs Do Fly, launched with the mission statement of providing roles for over-50 actresses in every production.

Considering this backdrop, Having Our Say is more than a corrective. It’s likely the first play in which both of its characters are centenarian women of color. At Primal Forces’ regional premiere, this means two roles of uncommon heft and history for Karen Stephens and Avery Sommers, who have been director Genie Croft’s preferred cast since before the play was slated.

Adapted by Emily Mann from the best-selling memoir of Sarah L. and A. Elizabeth Delany, Having Our Say is set over a couple of hours in the charming interior of the Delany sisters’ shared Mt. Vernon home, circa 1992. There’s a mahogany dining table in the center of the stage, comfortable chairs to stage right, curio cabinets with carefully chosen knickknacks and china, family photographs—from the real-life Delany Sisters—framed on the walls, and a plausibly functional kitchen space. Thanks to scenic designer Nicole DeCicco, it’s the handsomest set I’ve seen in the Sol Theatre space, dwarfing in scope the more minimalist furnishings of prior productions.

In these comfortable confines, Sadie (Sommers) and Bessie (Stephens) share their life story, and arguably that of their imperfect nation. Sadie is 103, and her sister is 101. Two of 10 siblings descended from a former slave, both achieved pioneering success as working women in a white patriarchy: Sadie earned a master’s degree in education and became the first African-American of either gender to teach high-school science in the New York public school system. The only black woman in her school, Bessie graduated Columbia University’s School of Dental and Oral Surgery, and practiced dentistry for decades.

Splintering the fourth wall if not quite breaking it, Sommers and Stephens treat the Primal Forces audience as privileged houseguests eager to absorb their insights on everything from the injustices of Jim Crow to their abiding friendship and lifelong spinsterdom. (One of the memorable lines from the memoir makes it into Mann’s adaptation: “The reason we’ve lived this long is because we never married. We never had husbands to worry us to death.”)

In what will register with older black audiences as painful recognition and for white audiences as sobering instruction, Mann weaves hard truths about growing up as a second-class citizen around code words and shared idioms, and Croft oversees the Delanys’ frequent transitions from humor to rage to heartache with dexterity.

Part of the reason for these shifting tones is that the personal and the political are never separate for very long in Mann’s script. Outliving their siblings and parents alike, the Delanys also celebrated and/or survived one epochal event after another: women’s suffrage, the Great Depression, World War II, the Civil Rights Movement, the Harlem Renaissance, Vietnam. The fountain of these elders’ wisdom springs eternal.

Eschewing every creaky stereotype of elderly acting, Stephens and Sommers present as vibrant raconteurs, their characters’ ages only betrayed by the patient deliberation of their movements and a subtle stoop in Stephens’ posture. We happen to be dropping in on the day they’re preparing an anniversary feast, in honor of their late father, of ham, chicken, vegetables, mac ‘n’ cheese and desserts, and they spend much of the script chopping, cooking and baking, all accomplished with spry skill. These were, after all, women who picked up yoga in their ‘80s.

Stephens has played aged-up characters before—her wry creation of an old yenta in Bridge and Tunnel comes to mind—and she takes to the part like second nature. Of this two-hander, she’s smoothest at affecting the accent of Bessie’s native North Carolina; she speaks of “children” as “chi-ren.” Her recitations are the most polished, whereas Sommers occasionally seems to be searching for the right word.

But this may be a veteran actor’s trick of the trade. Because isn’t this the way we recover memories, dredging them up slowly, working out the details like a Polaroid in development? For that reason, it’s Sommers who comes off as slightly more natural—not that it’s a competition.

These actors are never better than when conveying the minutiae, the wordless exchanges, the grace notes. Savor the insouciance with which Stephens licks a dessert spoon clean in an act of unspoken punctuation. Or the tears that flow so poignantly from Sommers when revisiting an old grief anew, the wetness dripping into her mixing bowl. Or the way Stephens glares at Sommers for spinning a yarn she’d rather keep private, while shuffling off to the kitchen in a rare fit of pique.

Having Our Say could have used more of this, and more interaction between the sisters generally: Stephens and Sommers have enviable chemistry together, creating the kind of siblings who can anticipate each other’s movements and finish each other’s sentences. But they mostly talk to us, and while we remain invested, the show loses the crackle of their camaraderie.

Indeed, for all its significance as a vital document of a century and two of its unsung heroes, Having Our Say can feel like a dose of vitamins, or the theatrical equivalent of kale—nourishing, healthy but seldom exhilarating. Don’t take this the wrong way: A lot of people like kale, and I’m the one of them.

And I particularly admired the timeliness of the production, arriving as it does in a political environment of ascendant racism and neo-fascism at home and abroad. No astute adaptor could resist the irony of Bessie’s assertion that “it’ll be 1,000 years before we see a Negro president,” and Mann duly includes it.

What would the Delanys have said about Barack Obama? His successor? Black Lives Matter? Gun violence? Time’s Up? We can only imagine, but we at least we have a pair of sterling performances to help us along.

This entry was posted in Performances, Reviews and tagged Avery Sommers, Emily Mann, Genie Croft, Having Our Say, Karen Stephens. Bookmark the permalink.