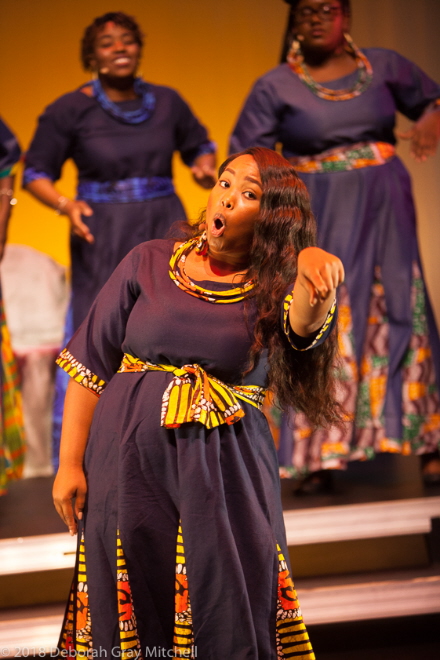 The timing couldn’t be better for The M Ensemble Company to trumpet its mission by presenting God’s Trombones.

Fresh from its first Carbonell sweep in April, where the Miami theater troupe scored four awards for its January 2017 production of Kings of Harlem, and won a fifth Carbonell for actress Carolyn Johnson’s performance in Flyin’ West, Florida’s oldest operating African American theater company reached back into its own archives to present a piece of cultural history.

M Ensemble first staged God’s Trombones, by James Weldon Johnson two decades ago at the Bakehouse Art Complex. The company’s executive producer Shirley Richardson said that since they moved into the Sandrell Rivers Theater, it was earmarked to be performed on the stage of the troupe’s new permanent home.

While the company’s selection of plays for its seasons are always intended to reflect the African-American experience – (take note that they’ve produced all 10 of August Wilson’s Pittsburgh Cycle, the playwright’s series that charts the African American experience throughout the 20th century), every once in a while, they’ll make sure audiences get a dose of traditional African-American culture and history.

God’s Trombones isn’t the usual theater piece – it’s a 1927 book of poetry with the subheading, “Seven Negro Sermons in Verse.” Johnson, a NAACP pioneer, novelist, poet and songwriter, had his own mission, and a philosophy that included literature as a way to lessen racism in America. This was his idea – that if African-American people produced great works, by doing so, they could “demonstrate their intellectual equality and advance their placement in society.” The book was published during the Harlem Renaissance, where creative and intellectual life thrived within African American communities in the North and Midwest regions of the United States.

Some in the audience were familiar with the work (one person told me that as a youngster in church she was required to memorize and recite Johnson’s orations, along with those of Langston Hughes), yet there were the others who had expected to see a linear narrative. But it didn’t take long for M Ensemble to dash any expectations.

Johnson’s inspiration for his “Seven Negro Sermons,” as he said in his 1927 preface to the book, was to revere the “old-time preacher who, for generations, was the mainspring of hopes and inspiration. . . (He was) above all an orator, and in good measure, an actor. He knew the secret of oratory that at bottom it is a progression of rhythmic words more than it is anything else.” Johnson compared those preacher’s voices to trombones: “The instrument possessing above all others the power to express the wide and varied range of emotions encompassed by the human voice, and with greater amplitude.”

M Ensemble treats Johnson’s work with a reverence, letting his poetic words speak for themselves. There’s a simple stage, unadorned (only seven chairs on a riser, with coverings of light green silk). Costumes are simple tunics, pants, and dresses, all with African inspired prints.

John Pryor, who directed the aforementioned production at Bakehouse, lets the words of Johnson’s Biblical inspired poems flow. He’s worked with his actors to present the preachers in characters in what would probably be the way Johnson envisioned it – they speak in rhythmic styles, yet each delivers their sermon in a way that suitably matches the story they tell.

Pryor takes us through the verses – the Book of Genesis for The Creation and Noah Built the Ark, to Moses and the burning bush in “Let My People Go,” the Gospel inspiration for “The Crucifixion” and “The Prodigal Son,” and Revelations for “Go, Down, Death” and “The Judgment Day.”

With only a change of lighting, sometimes a pulpit pushed onto the stage, or the music of a keyboard-turned-church organ (credit musical director David Minus Jr.) we’re transported to, what feels, like seven different churches, different settings, different times.

As indicated in Johnson’s preface, and what makes God’s Trombones an exercise in acting, is that each of the requires the embodiment of a character. For the opening, Listen Lord, Deidra Chiverton is the prayer leader of the “congregation,” and she brings, in full force, a larger than life glimpse of what the audience should expect from this interpretation of the classic.

Isaac Beverly adds the right amount of drama to the story of The Crucifixion and Jean Hyppolite tells the tale in pure Technicolor of Noah and his ark.  His delivery brings to life the vision of people and animals boarding two by two.
Ray Lockhart’s Prodigal Son is filled with vigor. And, Toddra Brunson will make you shed a tear or two or three with her interpretation of Go Down Death: A Funeral Sermon. The grand finale is Joseph Long’s spirited and comical presentation of The Judgement Day, the story of God calling for Gabriel to blow his silver trumpet. Long’s interpretation is like a train chugging down a track as it keeps building to a crescendo.

Gospel songs are joyfully rendered by a strong choir, whose voices come together in harmonies that are sheer perfection, and sound as if they are coming from on High. Brunson and Chiverton are joined by Carbonell Award winner Sarah Gracel, Randall J. Heidelburg, Asher Makeba, Daryl Patrice, and Brianna A. who provide the interlude between sermons. The tunes are recognizable, old timey numbers that automatically summon a sing-along without the audience being prompted: the spirited “Down By The Riverside” to the somber “Were You There When They Crucified My Lord,” and various other numbers in between.

Choreographer Jeffery J. Case Cason, Jr., is joined by three other dancers in a blend of jazz and African dance, adding life to many of the songs. Especially stirring is their playing out the story of The Creation, as they dramatically portray what happened in the garden when Adam and Eve were swayed by Satan. Cason’s choreography captures serpentine curves and plenty of slithering.

For those who were assigned to commit Johnson’s narratives to memory in their younger days, the troupe’s Trombones will wrap them in warm nostalgia. For others who weren’t exposed to this great American classic, M Ensemble and director Pryor’s skillful interpretation should elicit praise for introducing, and keeping, this important treasure of cultural history in the public eye.