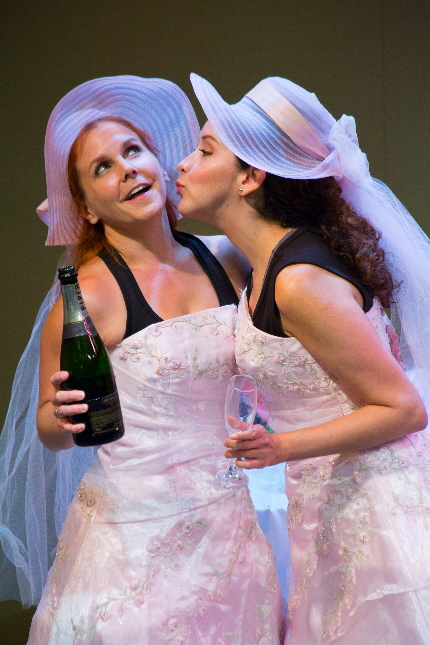 Mort Sahl. Dick Gregory. Pat Paulsen. Vaughan Meader. Political satire is like the finest champagne – delectable at the time but going flat with age. The day will come when Stephen Colbert’s The Hungry For Power Games and Andy Borowitz’s missives from The New Yorker will only elicit a small smile of nostalgic recognition,

But in the meantime, as Shorts Gone Wild 4 (subtitled Decision 2016: It’s Gonna Be Yuuuuuge!) underscores, what a terrific way to blow off angst about today’s polarized landscape.

As always with this spinoff of City Theatre’s Summer Shorts program, some of these glorified skits work better than others. But, also as always with these undeniably entertaining editions co-produced with Island City Theatre, the quality keeps inching up year after year. This year there are no outright duds and a majority of the eight offerings are downright hilarious.

Of course, Shorts enjoys a great gift in the risible specifics of this surreal moment in American history. But Shorts also benefits from some of the best talent in the region to pull off plays riffing on how political furor has undercut marriages, friendships and even potential sexual trysts. Observers would be tempted to say that there is a serious message buried beneath, such as the ludicrous folly allowing such nonsense to damage disrupt human relationships. But naaaah, this is just fun. And while Hillary comes in for a few jabs, this is clearly an occasion in which Trump is skewered, basted and roasted.

One note: The first couple of Shorts Gone Wild, meant to be a slightly blue more adult version of the parent edition, weren’t especially wild.  But Island City, with its LGBT mission and core audience, has ramped up the uninhibited factor. Now, sexual orientation is an element of almost every playlet including an unbridled lesbian coupling (fully clothed in bridesmaid’s outfits) and a waiter wearing only a leather jockstrap and military cap.

No offense meant to the tiny Empire Stage where Island City and Shorts have been headquartered for years, but the new digs operated in Wilton Manors with Infinite Abyss is roomier, has more seating and just feels more professional with its better lighting, projections and modest settings such as several hangings of red, white and blue bunting.

The past practice of letting the audience choose the running order (which always seemed a bit manipulated) is in this edition knowingly intentionally a con job to lampoon how the election system is a farce in itself.

So, here are the candidates in the order of appearance:

Things My Grandfather Taught Me, written by Michael McKeever (author of Daniel’s Husband) and directed by Michael Leeds, portrays a gay couple (Dominic Smith and Noah Levine) and a lesbian couple (Rita Joe and Shorts veteran Gladys Ramirez) out to a dinner that melts down after the politically opposite Joe and Levine begin sniping at each other. Like several of the plays, the characters’ being gay isn’t actually essential to the division of friends and lovers, but it certainly widens the chasm such as Levine’s opinion that being a Log Cabin Republican is an oxymoron.

McKeever is a master of the Wildean quip and his cast makes the most of it with speeches like, “Yeah, let’s talk about Facebook. When he first got the idea, do you think Mark Zuckerberg thought, “A new social media where you can post whatever vile thoughts or groundless accusations you might have about any political figure to everyone you have ever known, regardless of their political affiliations, with the complete understanding that you are going to offend and alienate huge amounts of people, aka your quote-unquote friends, who will then be able to add their uncensored, vile and groundless replies to your original post.”

Dear GOP by McKeever and directed by Leeds goes for a quieter tone as a genial, warm Lawrence Buzzeo seems to be having a gentle break-up conversation with a longtime lover for whom he still has affection. Except that who he’s breaking up with is the Republican Party. He quietly, methodically explains how he has watched the party that represented his concerns about large government and economic growth turn uglier and uglier until their relationship is no longer tenable. McKeever’s words, Leeds direction and Buzzeo’s delivery – completely absent broad satire or righteous anger – underscore the sadness that some mainstream  conservatives as their party has veered so far from its roots. It’s a masterful job of how the two situations resonate with such lines as “The world is changing dear. It’s moving forward at a clip faster than any of us could have ever imagined. And I’m doing my damnedest to keep up. So many of us are. The problem is: You’re moving in the opposite direction. And that’s just not going to work for me.”

Berniesingles.com by Jessica Farr and directed by Shorts veteran Gail S. Garrisan is a raucous infomercial in which pitchman Levine hawks a kind of dating service for Bernie Sanders supporters who, now abandoned, are looking for life mates. But they find they have to compromise with outrageously unsuitable candidates for their romantic life. The idea is ingenious and Levine never lets the pitchman’s manic energy flag. But since it really is only a premise, like a Saturday Night Live skit, it does seem to go on and on once the initial idea is laid out there.

The Incident in the Bathroom, written by Island City favorite Michael Aman and helmed by Artistic Director Andy Rogow, is more of a muddle that sounds like the set up for a Lenny Bruce bit: “So a gay, a straight and transsexual walk into a bathroom.…” The set up, obviously inspired by North Carolina, is that Buzzeo as a homosexual gets into a confrontation in a library lavatory with a heterosexual played Smith. Joe as a transsexual intervenes and there is a confusing mishmosh of arguments that frequently involve discussion of exposing penises.

Jenny & Simone, written by Christopher Demos-Brown and directed by Margaret Ledford, is the simplest, most predictable and absolutely the funniest political piece of the evening, in part because it’s so simple and you are supposed to see the denouement coming. The always superb comedienne-actress Christina Groom and always game Ramirez are bridesmaids who have just met but have instantly bonded at the reception and have escaped in the throes of lust to consummate their attraction. Amid an avalanche of kissing and groping, they find each other shares exactly the same likes, dislikes, even doubts about religion. These discovery of shared affinities grows and grows to a crescendo as does their love making until… well, you know how this will end.

The Lie by Leeds and directed by John Manzelli once again stars Groom (a virtual chameleon) as a hard-driving queen of country music and Buzzeo as her laid-back politician husband, both in middle-age and finding younger rivals are threatening to eclipse them. So they plot with their lesbian maid Joe to spread a rumor that they’re gay – despite having five children – and thereby juice up their presence and stature on the gossip circuit.

Lips Like Crocus by Stuart Meltzer and directed by Garrisan is an amusing hoot in which Levine has come to psychiatrist Ramirez with his lover Smith to figure out why he is sexually aroused by a certain MSNBC political commentator. It too, goes on a bit long, but Levine is comical as he becomes inflamed just talking about his TV crush—who is not Anderson Cooper.

The show ends with Be The Change written by Shorts co-founder Susan Westfall and directed by Manzelli. The premise is that a buttoned-down straight couple, a completely different Groom and Levine, discover that their boring routine Friday night of a mediocre movie and a Mexican restaurant where they always order “the usual” is upended because it has been bought out by a trendy outré over-the-top gay couple Ramirez and Buzzeo in out-there outfits and Smith as a waiter wearing the aforementioned little to nothing. The idea is cute as the couple become looser and wilder, and the cast lets everything go. But it’s by far the weakest piece that seems to not only go on too long but unravels into a mess by the final blackout.

It’s a hoot of an evening mixing the current political uproar with references to evanescent trends like Pokeman Go and gay pop culture icons such as Karen Black trying to land the 747 in Airport ’75.

It’s enough to make you want to go out and vote.