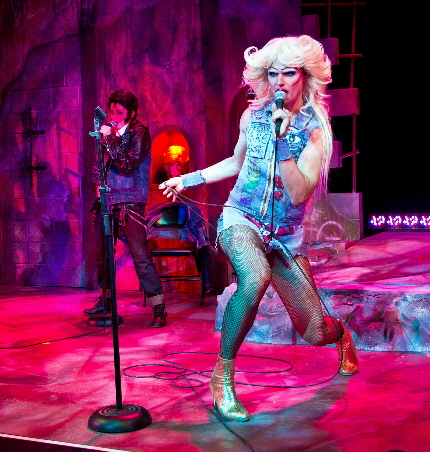 For the 73 theatergoers in English-speaking world who might not know, Hedwig is not a Disney bring-the-family musical. It’s an in-your-face raunchy celebration of alternative sexuality, a show that recognizes absolutely no bounds and revels in it.

Slow Burn has always embraced a wide range of genres and this glam/grunge rock musical headlined by a protagonist who suffered a botched sex-change operation once again reminds us that the company can conquer boundaries past the PG-rated Avenue Q.

His Hedwig in flowing blonde locks and fishnet stockings commands the Abdo New River Room telling the audience the tragic story of her life, infused with sex-drenched humor, faux self-pity and a rack of songs that range from kick-butt rock to fleetingly poignant ballads.

Be careful where you sit. She (or is it he or they or zie) strides into the audience, in one case pumping his crotch in someone’s face (likely cleared in advance) and bringing up someone from the audience to help instruct the audience on a sing-along chorus.

The Scott/Fitzwater creation is not quite as electrifying as that of some of their predecessors, but it is much funnier and therefore more accessible as they play directly off the audience and insert a score of local references and nods to more recent events. Rick Scott and Anderson Cooper get a mention. Hedwig notes that the very street the Broward Center is located on was named after her: “Him-or-She Street” and notes that this nightclub-like auditorium is “the room where it happens.”

The plot (briefly because this has actually played in Thailand and Turkey) finds  composer-performer Hedwig playing a fourth-rate dive along with his husband Yitzhak. Next door in a larger venue, his protégé and former lover Tommy Gnosis is basking in arena-worthy adulation performing works that Hedwig wrote.

Hedwig explains how he was born Hansel in East Germany and fell in love with an American soldier who wanted to marry him. German law required Hansel be a woman, so he reluctantly agreed to have his penis removed. But the operation left him with a one inch mound. (Show creator John Cameron Mitchell contends that the protagonist does not identify as transsexual because the operation was never the gay Hansel’s preference).

Taking his mother’s name, Hedwig and the soldier move to a Kansas Army base, but then divorce. The devastated Hedwig regroups and starts a career as a lounge singer, performing his own work inspired by the 1970s pop songs he grew up with. He falls in love with the son of an Army general; they have a torrid nurturing affair until Hedwig insists Tommy face that Hedwig is not a woman. They break up and Hedwig’s life spirals until he explodes onstage in anger as Tommy’s inability, then somehow finds the courage to free himself from his own flawed character. Okay, not so briefly.

In this time of people discovering their place on an ever-expanding spectrum of sexual identities, Hedwig and the Angry Inch starts and end in unique places. Hedwig’s driving desire is to complete himself/herself by finding her “other half.”  She sings of a legend based on Aristophanes and Plato that individual human beings were split in two sexual identities during creation. But by the end of the show, he has abandoned this quest, finding acceptance in himself as a whole person all along. That’s what Wikipedia says.

Ably supported by the newly rechristened Mallory Newbro(ugh) as husband Yitzhak and a quartet of solid musicians, this Hedwig production is actually more comprehensible than other editions because you can understand more of the lyrics –  until the last ten minutes during a manic breakdown and epiphany that has never been decipherable in any of the four productions we’ve seen.

Scott, Newbro and the band nail the score by Stephen Trask, which is more eclectic than you may recall. If you’ve seen it before, you’ll appreciate how, 24 hours later, that earwig of an upbeat anthem “Wig In A Box” is still playing in your head.

Scott is a Miami native and 2006 New World School alum who has shuttled between local roles such as the recent Jerry Lee Lewis in Actors’ Playhouse Million Dollar Quartet and national tours like Drew in Rock of Ages. (To read a 2012 interview with him, click here. )

Scott’s Hedwig is an ass-shaking, foot stomping, kinetic long-legged creature who rolls on the stage, bends over in the pain, bends backward to scream into a microphone held aloft, emits shock waves of anger and fury – and wears Farrah Fawcett-like wigs that he notes are built to withstand a Cat 5 hurricane. He revels in sexual and scatological humor (“When people think of huge openings, they think of me” and “Then I think of all the people I have come upon — and all the people I have come upon.”) Scott who played Younger Brother in Ragtime at Actors’ Playhouse is never less than credible doing all of it. 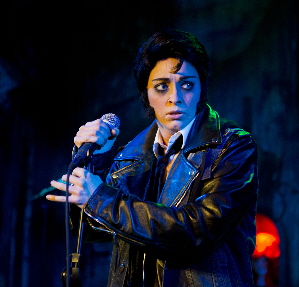 “Mallory Newbro” is not a typo in the program. Ms. Newbrough has been so memorable in everything from Belle in Beauty and the Beast to her Carbonell-winning Janis Joplin in Beehive. But she has achieved Actors Equity status and union rules says she can’t have the exact name as any existing member, thus…

She is delightfully sullen as the endlessly abused Yitzhak wearing an Elvis style black wig with sideburns. Usually singing backup, Newbro also gets to show off her solo from a deep contralto on some numbers to a gorgeous melisma when she satirically croons “I Will Always Love You.” As intended, Yitzhak is actually a better singer than Hedwig.

Slow Burn newbie Paul Tine, who was musical director and keyboardist for Freaky Friday, showed his versatility doing similar duties for this show, leading the band of Daniel Bailey on bass and guitar, Chase Maddox on guitar and Lukas Weber in drums. All of them add backing vocals.

Michael McClain created a set that initially resembled a ruined castle left over from a Halloween fright house but then made sense as a bombed out Berlin.

But it was veteran Slow Burn designer/actor Rick Pena who had a field day making the glam/grunge costumes for everyone including the band. The photos of the fraying denim outfit, gold high heel boots, black leather jacket, are more eloquent than words can be. But it’s the touches that are memorable such as the expansive cape Hedwig spreads on his grand entrance. When he turns to face us, the inside of the garment on one side contains the words “Yankee go home” and on the other side “with me.”

Believe it or not, Hedwig and the Angry Inch is 20 years old. But Slow Burn’s production makes it feel like it was written last week.

Hedwig and the Angry Inch  presented by Slow Burn Theatre Company plays through Nov. 25 at the Abdo New River Room, Broward Center For The Performing Arts, 201 SW 5th Ave., Fort Lauderdale. Performances are Thursday through Saturday at 7:30 p.m., Wednesday at 2 p.m. and Sunday at 1 and 6 p.m. Running time 1 hour 40 minutes with no intermission. Tickets are $50-$60. Call (954) 462-0222 for tickets, at www.browardcenter.org or #Ticketmaster.com; in person at Ticketmaster outlets or the Broward Center’s Auto Nation Box Office. Info at www.slowburntheatre.org. The musical moves to the Aventura Arts & Cultural Center Nov. 29 – Dec. 2.