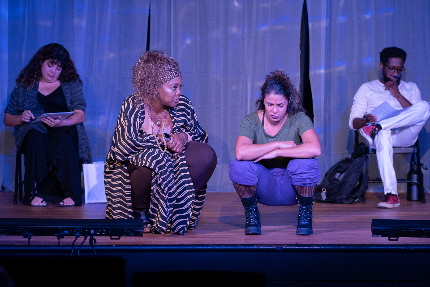 Erin Wilbanks, Annette Monk, Vanessa Tamayo and Roderick Randle take a moment to think about the intersection of theater and racism in Main Street Players’ Shakespeare is a White Supremacist (Photo by Olimac Media)

It’s not a command. It’s an angry retort to a question that the responder believes the questioner should already know the answer to – if the questioner was really as eager to learn as he claims to be.

The question at hand is how white people can repair race relations and address centuries-old inequities in America in 2021.

It’s the key exchange in the Andrew Watring’s timely broadside Shakespeare is a White Supremacist at Main Street Players.

The trenchant drama leavened with comedy reverberates in our heightened post-George Floyd sensitivity by examining theater’s own unintentional but institutional racism as a metaphor for the issues infecting society at large.

Watring’s 2018 play leaps back and forth among rehearsals for A Midsummer Night’s Dream with aggressively recruited multi-ethnic casting, the past auditions of its six actors and each performer’s revealing interior monologue about their angst-filled experience where art and race intersect.

Those direct-to-the-audience confessionals expose a varied array of far more complex situations than most liberal sympathetic white audience members may have imagined – which is exactly Watring’s painful but incisive point.

For instance, Ophelia (most of the fictional actors are named for other Shakespearean characters) struggled that she was raised with little exposure to her Latin culture and only now is trying to cope with as a Latinx actor.

Titania rails against the fact that as a multi-ethnic woman, casting directors – and presumably everyone around her – can’t comfortably pigeon-hole her as one race or another and they shy from casting her.

For context: In July 2020, theater artists of color banded together on a national level to protest a lack of diversity in everything from titles to casting, administrators to grantees, down to thoughtless hurtful expressions during rehearsals. They made public a letter signed by more than 300 artists entitled “We See You, White American Theater, Our Demands Are In / Principles For Building Anti-Racist Theatre Systems.”

Privately and quietly, some South Florida artists echoed those concerns. Since then, local theater leaders have gathered repeatedly online during the pandemic for formal training as well as informal discussions about what problems exist and how they should be addressed.

The play is, indeed, about these issues, but the metaphor for society is mirrored in theater being a crucially interdependent community. This is underscored in a imaginative directorial stroke of actors warming up in front of the incoming audience by gathering in a circle to chuck multiple bean bags and tennis balls at each other to sharpen their awareness of each other.

Watring is a playwright, director and producer who frequently has fused Shakespeare and contemporary issues in his work American University Rude Mechanicals troupe and his own Fratcal Theatre Collective in Washington D.C. which debuted this play.

The play’s wryly-meant title comes from an early monologue in which Ophelia notes that when a director walks into auditions, he invariably pre-casts white performers in a variety of potential roles. But when a black man walks in, she says, all the director can imagine is Othello. And when a black woman walks in, “What does a director see? Anything?”

Crucially, these arias are delivered with an anger fueled by years of agonized frustration, but carefully camouflaged by different characters by varying degrees of calm or disinterest or contempt or confusion or fear. They are delivered here as observations, not direct challenges to the audience’s own complicity in short-changing perceptions — although Watring obviously wants us to take them as admonitions.

Watring does not supply specific solutions. Indeed, without spoiling anything, its problematic finale calls into question the sincerity of white allies’ offers of help. But it does provide in inescapable detail the complexity and extensiveness of the plight of theatrical artists of color – and by extension simply being a diverse citizen in 21st Century America.

His fearlessly incisive script still needs a bit of work, but it succeeds because it is infused with moving passion and informative insights that are compelling and mind-expanding. Indeed, the monologues may seem a tad didactic reading them as hectoring lectures on dry paper.

But here is where Watring owes thanks to Main Street Players. Carey Brianna Hart, a versatile director-actress-stage manager, helms this outing with deft skill, a solid vision and a unifying style which incorporates fervor, humor and considerable physicality such as when one actress auditions by twisting her body in, out and through a chair while spouting the Bard’s verbiage.

Hart, in turn, has cast a septet of winning actors who imbue each differentiated character with a vibrance and palpable humanity – and therefore inarguable truth as they describe their plight. Some performers are better than others, but Hart has helped all of them deliver solid work when the characters bare their souls directly to the audience with painfully precise examinations of the differing paradigms.

Annette Monk is Juliet, an outwardly self-assured Dominican actress who mourns that her Afro-Latina ethnicity prevents her from being cast in the role she feels born for: Cleopatra. She doesn’t appear black enough to be cast as black and not Latina enough to be cast as Latina.

Katlin Svadbik is Viola, whom others suspect of getting cast because she is involved with the director. She is wounded that she is mistaken for being a white Anglo and dismissed by other artists of color. Chasity Hart, who was so memorable in The Colored Museum and Sisters, scores as the angry Titania.

Roderick Randle, who has done several shows at MSP, is Macbeth, a pal of the director but whose self-created “nice” exterior evaporates into a furious diatribe echoing a minstrel show. “I’ve had to hide so much pain in there, there is no room for any of me.”

Vanessa Tamayo is especially effective as Ophelia, who was culturally raised in a virtual vacuum so far as her Latin heritage. Erin Christine Wilbanks is the sole white performer in Midsummer and a fish way out of water.

Matthew Salas is convincing through most of the evening as the young white director who bucked his theater company’s norms by insisting on this Shakespearean classic with a multi-ethnic cast. He exudes earnestness as he awkwardly tries to avoid doing or saying something offensive as if there is a perpetual censoring device in the back of his mind. Yet, he convincingly slips in unthinking statements and actions that exemplify his deafness and blindness. His cast and the audience audibly gasp when he tries to assure one of his actors, “After 15 minutes, no one will notice the color of your skin,” precisely what they don’t want.

Notable is the discomfort, even competitive resentment almost all the characters feel for each other. The lack of “sisterhood” undercuts any idea that all people of color unreservedly back each other up or see themselves being in the same struggle. At one point, Titania responds to Ophelia’s woes about not being considered Latina: “Your skin is a bit too light to have a voice in this conversation.”

Even at 90 minutes, the play bogs down a bit. It takes turns that are entertaining but whose relevancy are not especially clear. Start with an actor and actress struggling in rehearsal. To unblock, they start playing with Othello and Desdemona. When that doesn’t work, they switch roles. The resulting confrontation-murder soars out of control with extended over-the-top performances that are hilarious, but whose thematic point to this play was lost on this critic.

The evening ricochets back and forth between past and present, reality and fantasy. The switches are adroitly communicated by Hart with changes in Amanda Sparhawk’s lighting and a blast of recorded applause by Alex Tarradell to signal scene changes. Characters are visually expressed in the rehearsal garb and outrageously silly boa-bedecked costumes for Midsummer designed by Angie Esposito.

For white and progressive audiences, the more unsettling aspect is the laudable good intentions of the director to use the Midsummer production as a step toward addressing some of the ills he has heard about. (“I thought I was one of the good ones.”) Many in the audience will identify with him.

Therefore, the aforementioned finale with the director is deeply puzzling for older white liberal folks like me who ask for help to identify problems, what solutions are needed and the like. The response is sometimes “discover it for yourself” or the aforementioned terse “listen.”

In fact, Ophelia among others don’t simply want the director and us in the audience to “listen.” She urges us to “see” her. Not see a generic Latina, but a complicated human being for whom a not-to-be-classified ethnicity is part of her but hardly all that defines her.

So the prescription – only for a first step – is to jettison deeply ingrained preconceptions, open your mind, and then — listen and see. This show is a good place to start.

Shakespeare is expected to be Main Street Players’ last show in this storefront space after 18 years. The landlord wants to redevelop adjoining properties. But it offered a slightly smaller space in a former Victoria’s Secret boutique a few doors deeper into the shopping center. The company is seeking donations to pay for turning the new blank space into a theater in time for its next show slated in April.

COVID Protocol: There is reduced ticket sales to enable social distancing in the relatively small auditorium. Masks are not required although most people wore them opening night in the lobby, then about a quarter of them took them off once the lights went down.

Shakespeare is a White Supremacist runs through Oct. 17 at Main Street Playhouse, 6766 Main St., Miami Lakes. Tickets are $30 general admission and $25 for students, seniors and military. The running time is 90 minutes with no intermission. Visit mainstreetplayers.com. Video On Demand will be available beginning on the final weekend of the show and extend five weeks until 11/21 available for download at www.mainstreetplayers.com/tickets for $10.