Report From New York: A Welcome Return Into The Woods 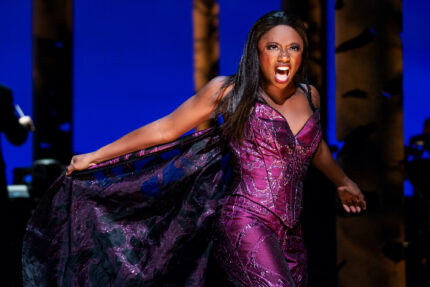 We’re back from our trip to New York to scout out productions you might want to see (or not), shows that might tour South Florida and scripts that might be worth reviving in our regional theaters. The shows include: Almost Famous, Into The Woods, & Juliet, Death of a Salesman and Leopoldstadt. Links to other reviews can be found at the bottom as the reviews run.

Seeing a revival of a musical whose original production is particularly precious in your personal pantheon is not just dangerous to your long-cherished memories, but usually painful.

For this lifelong Sondhead, the 1987 bow of Into The Woods was a transformative episode of theater that is prized to this day. But the 2002 Broadway revival was just adequate, not a candidate to erase recollections. Other productions in regional theaters around the country haven’t been embarrassing but did nothing but lose the battle to supplant the memories. The less said about the 2014 film version the better.

So, despite the nearly universal praise this season, a tamped-down anxiety was companion before viewing the current revival at the St. James Theatre. It started out as a staged concert last May and began a Broadway run in June and has been extended twice with numerous changes in casting.

But fears evaporated from this Narrator’s clarion acapella announcement “Once upon a time…..” and then the pulsing skipping notes of a full on-stage orchestra. The uneasiness was supplanted by a gaping open mouth behind a Covid mask, as if to trying to inhale the ensuing hours.

It has been said that this New York production merging heart, humor, energy and imagination is better than the original. But that’s not the case; it is it’s own vision executed with an excellence that occurs when the finest talents available invest themselves completely in creating a fresh vision of a piece that has never been seen before quite that way.

Superb staging, choreography, visual and aural design, music direction, and deeply committed actors with glorious voices elevate this to what will be a milestone in the history of this brilliant work by Stephen Sondheim and the brilliant script by its first director James Lapine.

For the benighted: Characters from several classic fairy tales from Cinderella to Rapunzel intermingle with a new tale of a baker and his wife hoping for a child, and their neighbor, a witch with a complicated past and a bad temper. The witch sends the baker and his wife on a search into scary and dangerous woods for magic items that she will reward with their being able to have a child. The other characters including Jack of beanstalk fame, Red Riding Hood, Cinderella, her prince and several others enter the woods on their own quests. They not only achieve their wishes, but learn a little bit about their own characters as well as life lessons such as the baker learning to include his more competent wife in their joint efforts.

But that’s just the first act, and the licensed “junior” version ends there so that it has been done by literally hundreds of high school drama departments.

Lapine and Sondheim return in Act Two to show what exposes the false promise of “happily ever after.” There will be death, desertion, perseverance, betrayal, the lasting impact of imperfect parenting, and a score of far deeper lessons about real life as these once fairy tale icons undergo challenges that adults in the audience will recognize, all of which culminate in the songs “No One Is Alone” and “Children Will Listen.” The survivors find inner resources and the strength of  working together to find a somewhat more hopeful if uncertain future.

Director Lear deBessonet and her team have created literally hundreds of new inventive spins in the staging and pumped some extra verve in the journey, including good-naturedly upping the sexual humor. Musical Director Rob Berman has done complete justice to Sondheim’s score, but notably, there are lyrics that his cast has delivered so clearly and with such precision that some lines may seem new to Sondheads who have listened to the cast album scores of times.

And then there’s the cast whom we saw in mid-November: Every last person down to the ensemble members were clearly aware they were giving one of the most memorable evenings of theater some of the audience will take into their senile recollections.

It ranged from the leads like Montego Glover (Memphis) finding nuances to the Witch that we’ve never seen before (her sweet-voice “Stay With Me” is unequaled”), and Brian D’Arcy James and Stephanie J. Block as the Baker and his wife, down to (I’m serious here) the expressive acting of the puppeteer Kennedy Kanagawa animating an unusually appealing Milky White the cow (an inexplicably expressive skeletal creature that echoes the horses in Warhorse).

The current cast is terrific with Glover alternating nights with Patina Miller (Pippin). But the original performers when the show first opened included Christian Borle, Sara Bareilles, Ashley Park, Heather Headley and numerous others now gone. So credit whoever is doing the recasting because you’d guess the current cadre couldn’t be bettered.

Sadly, this edition is slated to end Jan. 8, but hallelujah, the show is going on a national tour beginning in February after a shakedown in Buffalo, then a sit down at the Kennedy Center in Washington, D.C. The current schedule has it stopping off in Boston, Philadelphia, Charlotte, Chicago, San Francisco and Los Angeles with other slots to come. If you are interested in the tour dates, locations and more information, go to intothewoodsbway.com. If you live within two hours of these spots, reserve a ticket as soon as possible.

Leading the tour cast will be current and past Broadway leads, including Glover as the Witch, Block as the Baker’s Wife, Sebastian Arcelus (Block’s real-life husband) as the Baker and Gavin Creel as Cinderella’s Prince/the Wolf. The touring company will also include Cole Thompson as Jack, the hilarious Katy Geraghty as Little Red Ridinghood, David Patrick Kelly as The Narrator, Nancy Opel as Cinderella’s Stepmother, Aymee Garcia as Jack’s Mother, Ta’Nika Gibson as Lucinda, Brooke Ishibashi as Florinda, Kanagawa as Milky White, Jim Stanek as the Steward and Alysia Velez as Rapunzel — all of whom will reprise their Broadway turns.

It is staged with the 11-piece orchestra separating three horizontal runways and characters acting primarily in a single plane like the illustration in a children’s book. But it never seems static; there’s always a sense of forward kinetic motion. There’s minimal scenery other than back projections and tree trunks all over the stage. But Tyler Micoleau’s mood-establishing lighting, roll-on furniture and props provide all the environment you need. And Andrea Hood’s costuming not only reinforces character but are humorous in their own right.

Suffice it to say: Fellow Sondheim lovers may muse back on the first time they saw Bernadette Peters turning from hag to a gorgeous chanteuse, or remembering Chip Zien struggling to deal with his father’s legacy, or Robert Westenberg’s intensely sexual Wolf, on and on.

But trust me, somewhere Steve is looking down grinning his approval.

This entry was posted in Performances, Reviews and tagged Into The Woods. Bookmark the permalink.