Report From New York: Come From Away & Anastasia, A Season Old; Fresh As Last Week 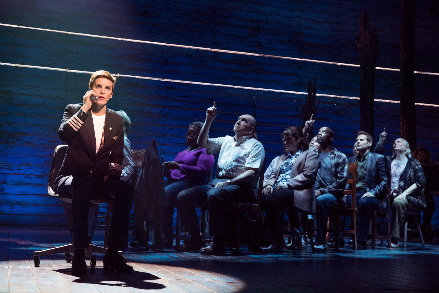 We’re back from our trip to New York to scout out productions you might want to see (or not), shows that might tour South Florida and scripts that might be worth reviving in our regional theaters.  The reviews include the revival of M. Butterfly, Ayad Akhtar’s new Junk, J.B. Priestley’s Time and the Conways, Anastasia, Come From Away and The Band’s Visit. Just search for “Report From New York.”

Sometimes you can’t get to New York as often as you’d like, so some shows just slip down your must-see list until they’ve been open nearly a whole season. You’re reluctant to catch up on a production that common sense tells you likely has slowed down and lost its freshness.

Well, two musicals currently playing shoot down that assumption. Indeed, they are worth taking in any time you make to Manhattan. And if you can’t afford a trip up north (and the obscene ticket prices and the slowed-down subway serviced and the cold), rest assured that these will tour South Florida in the next couple of years and should not be missed.

One is the least likely to gather angels’ backing in an elevator pitch, Come From Away; the other is a surprisingly solid and satisfying reinvention of an animated movie musical initially aimed at preteen girls, Anastasia.

Both shows opened on Broadway in March after workshops and shakedown regional premieres over the previous two years with much of the cast and creative intact.

But seeing them late last year, the passion and energy were as overwhelmingly infectious as if they had just bowed last week. Indeed, we saw Come From Away at a matinee when standbys had given two members of the original cast a breather – and it still played as smoothly as it must have opening night.

Come From Away is a musical retelling of what happened on 9/11 when 38 international flights bound for New York were diverted to the tiny town of Gander in Newfoundland, which had once been a major refueling destination decades earlier when fuel tanks were smaller.

The way the residents warmly embraced and nurtured the 7,000 displaced passengers from a hundred different backgrounds for almost a week during those dark uncertain days is one of the most uplifting examples of the basic decency that humans beings as a whole are capable of.  Far, far from some Pollyanna rose-colored fairy tale, this true story (based on extensive interviews with the people involved) is proof that humanity’s longing for a better world is not such a pipe dream.

The array of quirky diverse characters bonding together include the female pilot of one plane (played by the wonderful Jenn Colella), a passenger worried that she cannot contact her son a New York firefighter, the head of the school bus drivers’ union who suspends a strike to transport the passengers, the Muslim man who keeps trying to volunteer his services as a chef at the food line, passengers who find romance and others whose relationships disintegrate.

The book, music and lyrics were fused together seamlessly by Irene Sankoff and David Hein with the leadership of several people including director/choreographer Christopher Ashley. Like The Life and Adventures of Nicholas Nickleby, an ensemble of 12 actors narrate the story and chameleonically morph instantly into ever-shifting portraits of dozens of distinctly identifiable passengers, crew members and townspeople.

The whole story comes across as a kind of community barn dance in which the audience are strangers being welcomed into the festivities with a shared folk tale of solidarity and humanity.

The score played by an on-stage band, which ranges from Gaelic-tinged folk music to rock tunes, ballads to celebratory production numbers, almost never stops in sung-through fashion. So the pulsing peppy underscoring not only energizes the audience non-stop but provides a stylistic whole.

The rollicking pace never lags during the 100-minute journey except for the touching introspective ballads. Indeed, the show resembles a cherished jalopy rolling down a hill faster and faster inside the Gerald Schoenfeld Theatre.

Beowulf Boritt’s set design of tree trunks reaching into the rafters is augmented by simple chairs and tables endlessly rearranged into different locales — the claustrophobic interior of a jet stuck on a runway for hours, the town’s coffee shop that serves as the heart of the town, the gymnasiums used to house the victims. Howell Binkley’s lighting plot makes these locales instantly different from each other, plus he charts time of day and changing moods with the same ease.

If this sounds like some calculated feel-good show, be assured that it will make you feel good, but not because of cynical manipulation but for the deployment of genuinely earned sentiment. In a time of such deep divisions in this country, Come From Away is enough to make you tear up over not what we want humanity to be, but as a reminder of what we have already demonstrated that we have the ability to be.

Anastasia is a significant surprise because its origins as a 1997 animated movie would be enough on the surface to dissuade ticket purchases from most adults who don’t have a little princess in tow. 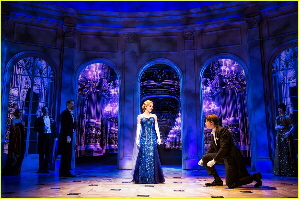 A clue to its success for audiences of all ages can be divined from the proven skill of its creative team: veteran playwright Terrence McNally, the composer-lyricist team of Stephen Flaherty and Lynn Ahrens, and directed by the inventive Darko Tresnjak. The first three worked together on Ragtime, and the fourth who directed A Gentleman’s Guide to Love & Murder.

This work has no such pretensions or aspirations. The plot is a riff on the familiar legend of how an amnesiac in St. Petersburg is groomed by a handsome con man to claim wealth and power by posing as Anastasia, supposedly the only survivor when the Russian royalty was executed at the start of the Revolution. Amid a burgeoning romance, the possibility arises that this waif is indeed the Grand Duchess – the basis of a play and a subsequent 1956 film with Ingrid Bergman, Yul Brynner and Helen Hayes.

The beautiful animated film also had music by Flaherty and Ahrens and indeed aimed for a younger demographic, but they have expanded it significantly and benefited from McNally’s narrative expertise. The story is still one of Disneyfied self-empowerment and all the other 21st Century politically correct verities, but it’s told with wit and heart and a minimum of diabetes-inducing saccharine. It’s the rarity: a genuine family musical that will entertain children but not bore adults because it is peppered with some serious undercurrents. Gone are the talking bat and the moustache-twirling villain Rasputin and the black magic climax.

The cast has breathtaking voices to deliver the soaring score, notably Christy Altomare as the spunky yet vulnerable heroine Anya and Derek Klena as the ridiculously handsome hero Dmitry. Until recently, the antagonist Gleb, a true believer in a new Socialist order was played by Ramin Karimloo.

But the real star of the evening besides the glorious music are the visuals at the Broadhurst Theatre – sumptuous costumes by Linda Cho, endlessly supple lighting by Donald Holder and some of the most inventive use of state-of-the-art LED crystalline animated projections that morph so easily that changes of scene, time of day, weather, anything are all as fluid as a dreamstate and as beautiful as a high def screensaver. Aaron Rhyne’s work here was deserving of its own Tony. His tour de force occurs when our heroes escape to Paris by train and a lengthy scene occurs on a railway car that swivels every which way. But as the car turns, so does the point of view for the background scenery.

There are certainly enough peppy tunes and power ballads to keep the kids enthralled and the piece’s cartoon roots show through frequently.

But the show has a quiet dark side. A pall of poverty and injustice in the streets in the early scenes contrasts with elegance and opulence of Czar Nicholas’ court balls. The revolutionary Gleb must struggle with the dangers of self-delusion when pursuing a violent and radical cause. To that end, the lyrics may not be as trenchant as those for Ragtime, but they explore the yearning for a lost past as people must move forward to the future.

Both shows are well-worth an evening in New York or, if you’re patient, within a season or two touring through the Kravis, Arsht or Broward Center.

This entry was posted in Performances, Reviews and tagged Anastasia, Come From Away. Bookmark the permalink.