Report From New York: Folky Bright Star May Be Fading On Bway, But Look For It Locally 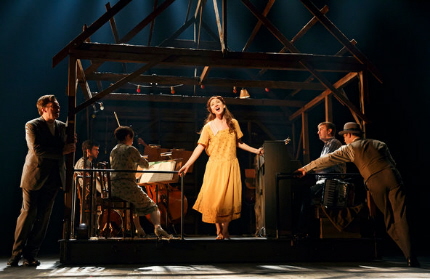 Nate Allen, the House Theatre of Chicago’s director and writer of its massive fantasy The Hammer Trilogy recently at the Arsht Center, said that one of its aims was to fill a void, that America really has no real mythology of its own.

Bright Star is a reminder that, bless him, he’s dead wrong. Born, nurtured and evolved over two centuries in the backwoods, mountains and fields of this country, Americans have constructed an overriding folklore that may lack specific character names like Zeus or Prometheus, but nevertheless have equally fantastical array of stock characters and almost ritualistic storylines honoring and promulgating a fabric of shared values and vision.

The new musical Bright Star is a 21st Century celebration of that tradition complete with plucky heroines, gentle humor, unbending fundamentalists, facile fiddling, profound personal tragedies and the eventual reconciling redemption with a distinct but not overbearing reliance on faith in a higher power. All of this respectfully transcends cornpone clichés while steeping itself in the verities and truisms of people who value values. It sidesteps sentimentality but is suffused with sentiment.

Sadly, the show is closing this weekend in New York after failing to win any of the five categories in the Hamilton-dominated Tony Awards. It’s not the kind of big spectacle that drew tourists, and the country vibe likely did not attract the self-consciously sophisticated New Yorkers. But those who did see it were mightily impressed and the recently-released original cast album means there’s a good chance that it will live on as a cult musical that a company like Slow Burn or Actors Playhouse might pick up. Certainly, it might succeed in a very carefully selected national tour.

The show, created by comedian Steve Martin and folk-rock star Edie Brickell, takes a little while to get in step with, and frankly there are some turns of plot and some melodramatic declamations that test credibility beyond endurance until you remember that it’s a country fable, not naturalism. But the work exudes a warmth and vitality that wins over most people who see it.

The show opens with a lovely middle-aged woman Alice Murphy circa 1945 leading a group of back country characters in an introductory anthem, “If You Knew My Story” that lets you know we’re going to spend most of the show in a flashback.

The tale itself opens soldier Billy Cane returning from service in World War II coming back to his father’s farm in rural North Carolina. He wants to be a writer and travels to the big city of Charlotte to present his work to the crusty editor of a nationally-respected literary magazine, Alice Murphy.

Time flips back and forth without warning, so suddenly it is 22 years earlier and Alice is a vibrant beauty, the daughter of an unbending preacher in another small town. She falls in love with the mayor’s son. He wants to marry her especially after she becomes pregnant. But the fathers break off their relationship, spirit her away to a hideaway and then take her baby away when it is born.

The mayor believes he has thrown the baby in a piece of luggage off a railroad bridge. Alice’s soul starts to shrivel and she dedicates her life to becoming the champion of southern literary writers like Thomas Wolfe.

It’s hard to describe more without spoilers, so…. Billy and Alice hit it off, and over time she discovers… well, remember the plot device at the end of The Importance of Being Earnest or maybe Kal-El coming to earth in a rocket ship in Superman?

But it’s not the story itself that matters but the sense of storytelling around a campfire or at a break during a summer frolic. The score, which is superbly arranged and played by an onstage band of bluegrass magicians, encompasses a modern prism of hill country folk music, hoedowns for lively choreographed production numbers, a big Texas swing number in a roadhouse, stirring gospel, barely disguised Broadway ballads and a finale that had the well-heeled sophisticated New Yorkers clapping hands with the band.

The cast led by veteran director Walter Bobbie and choreographer Josh Rhodes dives deep into their characters without a self-conscious wink. Their effort blunts any attempt to ridicule the genuine emotions flowing, no matter how clearly they are wore on sleeves.

The headline, though, is Carmen Cusack as Alice. Cusack has few Broadway credits, although considerable experience on the road and in England. She can put her bags back in the closet. Her show-stopping voice easily embraces plaintive solos to leading the revival-tinged finale. As an actress, she credibly bounces between the fresh-faced fiery spitfire of a small town girl and the middle-aged nail-tough sophisticate whose emotions have been cauterized by pain.

The earnest book by Martin (an accomplished playwright) and Brickell has its flaws. The tale starts seeming to be about one person and is actually about someone completely different. When the story makes that’s transition, you’re a bit disoriented.  The varying tones between Branson, Missouri, hoedown and poignant human drama is not always melded smoothly. Is it a fable with stereotypes like the unbelievable heartless villain of a mayor or is it a story of two sets of star-crossed lovers. The elements bump into each other, so that each undercuts the credibility of the other.

But listen to the CD or MP3 and make a point of catching it if you have the chance when some local company picks it up. You will likely be glad you did.

To read our review of Shuffle Along, click here

To read our review of The Father, click here