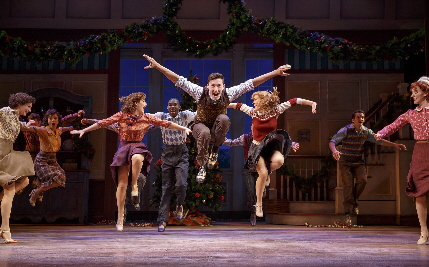 We’re back from our trip to New York to scout out productions you might want to see (or not), shows that might tour South Florida and scripts that might be worth reviving in our regional theaters. We will post two sets of reviews over the next few days. The other shows are Vietgone and Les Liaisons Dangereuses.

For those needing a comfort food return to a simpler time – and that would be almost the entire country right now — Holiday Inn is a precisely manufactured musical intentionally embracing all the heart-warming verities celebrated in a stage version of that Never Never Land enshrined in movie musicals from the 1930s and ’40s.

With a script based on the 1942 film of the same name and stealing 20 hits liberally from all corners of Irving Berlin’s voluminous encyclopedia of songs, this airy soufflé is precisely what it wants to be: a cheery, fluffy, calorie-less romance that knowingly and joyfully ticks off the iconic elements from a checklist as rigid and dependable as a religious rite.

It’s not as deftly or wryly pulled off as say the intentionally spoofy Crazy For You, and at least one light-year from the lovely An American in Paris, but it’s adequately entertaining.

This production is only running at Studio 54 through January15 with the obvious intent of being revived every couple of years like Elf, White Christmas, A Christmas Story and The Grinch.  And like those entries, bet that you’ll see this “family musical” within a year or so on a national tour and then on South Florida stages catering to mainstream audiences. It also will be live-steamed on BroadwayHD.com on January 14 at 8 p.m..

I can’t sum up the plot any better than the show’s publicity: “Jim Hardy leaves the bright lights of show business behind to settle down on his farmhouse in Connecticut. He quickly discovers life isn’t the same without a bit of song and dance. Jim’s luck takes a spectacular turn when he meets Linda, a spirited schoolteacher with talent to spare. Together they turn the farmhouse into a fabulous inn with dazzling performances to celebrate each holiday, from Thanksgiving to the Fourth of July. But when Jim’s best friend Ted tries to lure Linda away to be his new dance partner in Hollywood, will Jim be able to salvage his latest chance at love?”

There’s a pack of other standard creatures including the property’s wisecracking heart of gold handywoman of the Thelma Ritter school who just happens to have a secret past as a Broadway performer, of course.

The Roundabout Theatre Company’s production directed by Gordon Greenberg is suffused with the essential transitory charm needed, although you can see Greenberg and his colleagues pushing buttons all night.

What saves the evening it is the charismatic crooning leading performance of Bryce Pinkham (the dastardly anti-hero of A Gentleman’s Guide to Love & Murder) as the earnest Jim, plus the lovely voice of Lora Lee Gayer as his love interest, and the energetic choreography of Denis Jones (featuring Corbin Bleu as Ted accentuating his tap dance with firecracker explosions) and a production number involving skipping rope that you’ll likely see on the Tony Awards show this spring.

Well, of course, the real selling point is the Berlin catalogue that encompasses “Easter Parade,” “Cheek to Cheek,” “Blue Skies” and “White Christmas,” which fans know originally appeared in the film Holiday Inn, not White Christmas. If most of the numbers are inserted with the subtlety of a jackhammer, they remain an adulterated jubilant expression of an America that may never have existed, but we like to think did.

Sometimes you see a show in New York and you know it will be on your local stages in less than a year. So it is with the recently-closed  Heisenberg, a two-hander 80-minute comedy-drama with quirky characters, almost no scenery and an intriguing premise: a kooky woman in middle-age and a 70-something still-waters-run-deep man circle each other in a romantic dance.

Catnip to certain theaters we could name. 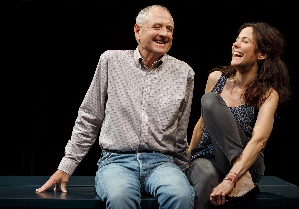 The script by Britisher Simon Stephens (fresh off his triumph penning The Curious Incident of the Dog in the Night-time) is an intriguing stunt, but not an especially engaging theatrical experience. This Manhattan Theatre Club production directed by the reliable Mark Brokaw is a popular draw because of Mary-Louise Parker in full ditz mode and a remarkable performance by veteran actor Denis Arndt in what strangely is his Broadway debut.

Parker is 42-year-old Georgie, an effusive creature perpetually spouting and sharing unbidden her constantly shifting and conflicting backstories. In a London train station, the Outsized American invades the quiet space of Alex, a 75-year-old reserved self-contained Irish-born butcher on the verge of retirement and who seems to simply want to be left alone.

They have absolutely nothing in common, no shared interests, no overlapping history or culture. Their personalities could not be more different. When the play begins, you are certain there is no way these two will end up together, even if they hook up briefly for contrived narrative purposes. In any rational narrative, they would meet, perhaps even spar in fun, but never end up in bed nor share the rest of their lives together. They do.

But about halfway through the play, the likelihood of a lasting relationship doesn’t seem so impossible. It is a testament to all the talents at work that when the 80 minutes end with a positive if offbeat prognosis, you genuinely can buy it.

It’s not clear what Stephens and the rest are actually trying to say; the title must refer to the Heisenberg Principle about observed molecules not behaving as they would have unobserved. But the connection is oblique, even as Georgie says, “If you watch something closely enough, you have no possible way of telling where it’s going or how fast it’s getting there.”

Heisenberg is more of an amusing portrait. Perhaps the point is simply that true deep abiding love is not necessarily a matter of similarities and shared backgrounds. Perhaps, as here, it requires nothing more than being intrigued by your partner as good company on a journey through life.

Parker, who can act like a normal person on stage when she chooses, opts for her patented over-the-top flake mode right down to slurring her words. While these choices make dramaturgical sense so as to make this a seemingly irreconcilable odd couple, her persona is full of theatrically contrived quirks that you can see were tried out and accumulated during rehearsals. Still, Parker herself never acknowledges the craft in her performance, committing to inhabiting Georgie’s sculpted adorableness with admirable abandon.

Arndt, on the other hand, is studiously and credibly naturalistic. Magically, Arndt’s Alex soul emerges and blossoms. He begins quietly resentful at this woman’s unwelcome intrusion, then seems a bit bemused by her antics. Bit by bit, we see him drawn in, almost disbelieving his own attraction. Initially shuttered, he slowly doles out engaging qualities including a wry sense of humor. Without making a big deal of it, Arndt’s Alex quietly but completely embraces this vital new chapter of his life.

The script of progressive vignettes itself seems workmanlike, but the dialogue is spare and indirect, even pointlessly off-topic as the characters avoid what they really want to say. So the actors and director must evoke a dozen unspoken threads through uncomfortable pauses and silences. Its strengths and weaknesses will be easier to evaluate when the play is eagerly mounted by a couple of dozen regional theaters in 2017.

In Lanford Wilson’s Fifth of July meditation on 1960s activists as they cope with the realities of middle age, the idealism of former social activist June is gently mocked by her teenager. June turns on her with deadly seriousness and says with carefully spaced words, “You’ve no idea the country we almost made for you. The fact that I think it was all a crock now does not take away from what we almost achieved.” 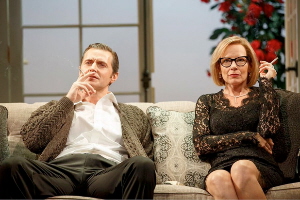 Love, Love, Love is a comedy that mercilessly indicts how at least one segment of Boomers, once so proud of their ideals, eventually compromised and adjusted to the realities of growing up until they have entered their senior years having made as much a mess of things as their parents.

British playwright Mike Bartlett, who has nimbly switched voices from the tough-minded Cock to the versifying King Charles III, once again changes gears for this wry indictment of a generation – at least part of one – that allowed their ideals to be eroded in their quest to satiate their selfish desires in every arena.

The title of the Roundabout production at the Laura Pels Theatre is a riff on the refrain of The Beatles’ “All You Need Is Love” but is actually is a hint to the structure of the play: a three-act look at the evolution of Boomers in different stages of life.

They start as putatively idealistic but heedlessly hedonistic twenty-somethings suddenly unleashed as adults on Oxford in swinging 1967. Kenneth (Richard Armitage unrecognizable from TV’s MI-5 and film’s The Hobbit) is a mop-top slacker student crashing in the flat of his straight arrow working class brother Henry (Alex Hurt.) Henry’s newest flame Sandra (the luminous Amy Ryan of Gone Baby Gone and The Wire) discovers Kenneth and the flaky free spirit good-time girl basically gloms onto the younger brother. They bond over a shared desire to pursue whatever makes them feel good, a literally self-centered ethos that will inform their choices for the rest of their lives. They sense they are on the cusp of a great future for the world they inhabit, mostly that anything they want is possible and available. Their only saving grace is some weird inherent affability that makes their egocentricity forgivable.

Fast forward to 1990. Kenneth and Sandra, now 43, are a career-obsessed couple, a classic middle-class suburbanites raising two troubled teenagers (Ben Rosenfield and Zoe Kazan). But the veneer of a picture-perfect family disintegrates as the dysfunctions appear quickly. Eventually, infidelities or the possibility of them destroy the family.

Now on to 2010, when both adults are wealthy retirees and their grown children have their own problems, most of which stem from their nightmare of parental mismanagement. But returning for Henry’s funeral, the estranged Kenneth and Sandra to find that their initial attraction and affection remains and there is the likelihood that they will get back together over some expensive champagne. But their daughter’s life is a mess and she blames her parents for bequesting a broken world, saying: “You didn’t change the world.  You bought it.”

While this journey is fraught with drama, fury and pain, it’s also very funny because the characters are inherently witty and because Bartlett skewers their pretensions and illusions with satirical spears.

The likelihood is you’ll see this picked up in regional theaters, although this fine cast and skilled direction by Michael Mayer papers over the fact that the play really does not delve very deeply into why the protagonists act this way other than that they have inherent character flaws.

The core cast members must age from early 20s to mid-40s and then to their 60s, while their children must negotiate the differences as troubled teenagers to young adults already sensing failures in their lives to date. While they have a tad of difficulty convincing us that they are young adults, Armitage and Ryan inhabit the characterizations in the other two acts, especially Ryan who adds to a sterling resume on stage as well as screen.