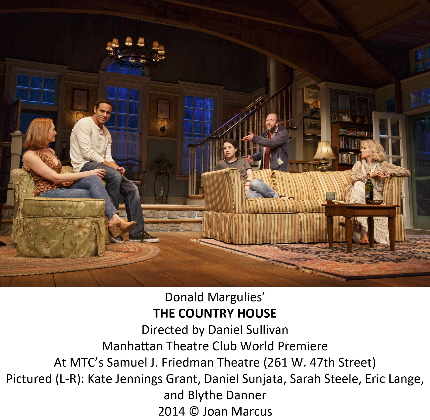 We’re back from our semi-annual trip to New York to scout out productions you might want to see (or not), shows that might tour South Florida and scripts that might be worth reviving in our regional theaters. We will run them intermittently over the next two weeks.

It’s difficult to precisely sum up what playwright Donald Margulies is driving at thematically in The Country House. Like the Chekhov play it riffs on, Margulies seems more focused on compassionately painting a sad-funny portrait of an emotional landscape rather than making a statement.

But like The Seagull, this motley collection of accomplished artistic souls on display are inescapably compelling as they collide into each other, scraping each other’s defenses raw and unleashing old resentments born of even older relationships.

The impeccably acted and directed production at the Manhattan Theatre Club production closes in about a week, but the well-crafted script clearly has a future as a promising entry for regional theaters seeking a comfortably conventional tale about how no one is comfortable in their own skin. The value added facet is the schadenfreude at seeing that these rich and/or famous and/or (at the least) talented folks are struggling with the same human frailties and insecurities as the rest of us.

Margulies showed in Dinner With Friends, Collected Stories and a dozen other works that he is too good a playwright to settle for simply transporting The Seagull to the present day. But he obviously relishes creating personalities and relationships that mirror Chekhov’s original household of creatures connected to The Theatre.

The play is set in a current summer at Williamstown, Massachusetts, the home of the famed theater festival that regularly attracts film and television luminaries seeking their roots in classic plays. Broadway mega-star Anna Patterson, who has returned year after year for decades, has come back for another season and opened her lovely house in the resort town.

She has brought along Susie, her collegiate granddaughter with a lovably level-headed attitude, and her son Elliot, a self-pitying mediocrity who has had a checkered career in the theatre. All three are mourning the death a year ago from cancer of Anna’s daughter and Susie’s mother, also an actress. Thrown into the mix – and the same house – is the dead daughter’s widower, the theater-turned-film director Walter, and his new girlfriend, the actress Nell who, in a move only believable in theater, is an old flame of Elliot’s.

And finally, to shake up the already volatile stasis, enter Michael. The studly theater actor has graduated to a calorie-less movie series that has blessed him with riches and fame – and driven him to “seek absolution” by slumming at the festival. This fox in the henhouse exudes such pheromones that all three women are attracted.

Mix, stir well and stand far back from the stove as a lot of truth-telling ensues, much of it coming from the clear-eyed Walter and the wise-for-her years Susie who sees through the self-medicating lies. While the experience of watching this play gets a little added topspin by spotting the analogs with The Seagull, Margulies has penned a work that stands on its own.

The hole in their lives left by the death of the daughter is still unfilled and adds a balancing gravitas to the comedy in the early scenes. But as resentments and dashed dreams are exposed among the stunted souls in the second act, the proceedings develop enough melancholy among the plentiful witticisms.

Unlike Kaufman and Hart’s outsized preening Cavendish-Dean clan in the The Royal Family, these folks are a shade more grounded in reality. Yes, they are inherently more glamorous and charismatic than you or I, and their metabolism pulses a few beats faster. But they are working folks who know the craft and skill required to create the illusion of their art.

Throughout, Margulies indulges his bent for acerbic wit. Someone tells Susie to “stop being a drama queen,” to which she replies smoothly, “I come by it genetically.”

But then, he has a superb cast that he had melded into a true ensemble of equals, all of whom create glorious flawed and fabulous denizens. 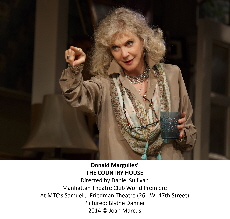 Start with the brilliant casting of the still luminous Blythe Danner as Anna. She expertly creates a skilled craftsman who has embraced the theater as a nurturing home, but who honors its required blue collar work ethic. She knows how much of the fame and fortune is transitory – and yet luxuriates in the illusion. Danner/Anna seduces the audience with her beauty and glamour but reveals that Anna has a serious problem giving her true self to others.

Then appreciate that sexually charged Daniel Sunjata (theater’s Take Me Out and TV’s Graceland) has built a three-dimensional Michael who is quite intelligent, accessible, humble and humane but who is struggling with the new found trappings (and traps) of stardom that frankly can give him anything – and anybody – he wants.

Eric Lange is not as well-known other than from arcs on Lost and Weeds. But he perfectly inhabits the nebbishy Elliot. Lange’s Elliot is at first admirable in his facility with an Oscar Wilde-worthy riposte, then revealing him to be a self-destructive loser with a talent for self-mortification, as one character puts it.

Sarah Steele is dead perfect as the odd-man-out daughter, the only truly sane observer in the pack. Kate Jennings Grant is the compassionate girlfriend trying to find a footing in the emotional storm around her. David Rasche, who has played scores of fatheads, reminds you that he is an actor, of course, by playing Walter as someone who is very talented, very smart and completely comfortable in his pragmatic view of commerce versus art – a frequent topic in this group.

The humor and bonhomie gives way through the arc of the play to melancholy as the extended family’s bonds are wrenched out of shape by physical lust and personal longing.

Sometimes the show seems to go on a bit long, but it’s hard to carp when the company is this, well, such good company.

One Response to Report From New York: Margulies Echoes Chekhov In Well-Built The Country House