Report From New York: Tyson Rewarding In Trip To Bountiful 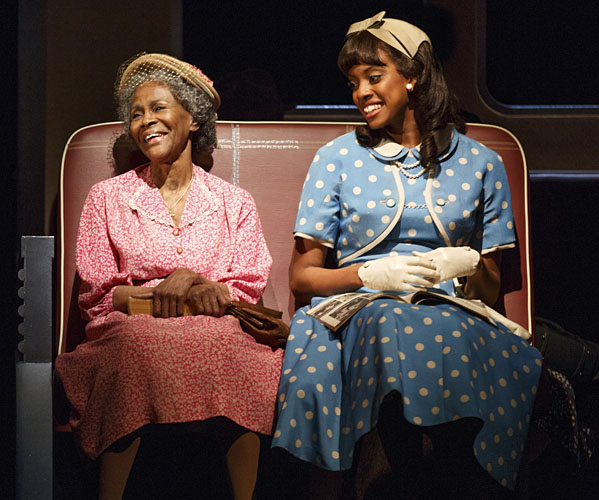 Road trip! Cicely Tyson and Condola Rashad on The Trip To Bountiful / Photo by Joan Marcus

It’s rare that color blind casting is truly color blind. There is almost always a paternalistic or self-congratulatory whisper from the director/producer that pleads or brags, “See, we’re trying to find artistically relevant work for African Americans actors.”

In some cases, the gambit succeeds because the actors are so good that they triumph over such ridiculous conceits as a black Cat on a Hot Tin Roof set on a Southern plantation, or the casting of an actor of color in a Shakespearean play pointedly underscores its universality, or occasionally the multi-racial aspect invests new life and nuance such as last season’s A Streetcar Named Desire.

What happens so smoothly and appropriately in the Broadway revival of Horton Foote’s The Trip To Bountiful, is that a play about a white Texas farmer who seeks to reclaim the soul she lost moving to Houston in the early 1930s is, in fact, a perfect and effortless fit with a primarily African American cast.

South Florida’s regional theaters, always looking for plays for its ethnically diverse acting corps and audience, might consider a local revival if it can learn from the virtues and deficiencies of this production.

This edition is helped immeasurably that the part of Carrie Watts, the 88-year-old heroine who runs away from a stifling life relying on her son and daughter-law – is played by the dead solid 79-year-old Cicely Tyson. Her Carrie comes alive as she journeys to revisit the abandoned farm where her family homesteaded in the tiny town of Bountiful.

The impending tragedy obvious to anyone over the age of 30 is that the Bountiful in her head hasn’t existed for more than 20 years and probably longer. Carrie is pinning her hopes for an emotional and spiritual resurrection on a chimera.

But Foote’s lessons — forgetting the past erodes your hard-won dignity, properly placing the past in the paradigm of living in the present and learning to move forward without letting go — are not simply universal, they are transcendent. The fact that Carrie was first played on television by Lillian Gish in 1953 and then on film by Geraldine Page in 1985 is, for once, genuinely irrelevant.

This revival is not perfect, by any means, although it is helmed by Michael Wilson, a veteran interpreter of the late playwright’s oeuvre. The script itself lolly-gags for the first third like a bunch of folks sitting on the front porch on a hot August evening talking about nothing in the hopes that its undeniable charm will carry past the dramaturgical requirements. There’s also a somewhat uplifting feel to the last movement of this sonata that doesn’t seem quite justified, as if it was an artificially happy ending. On paper and in another production, you can imagine it working, but not here.

There’s also one moment that is both a high and low for the evening. Mid-journey, Carrie launches into yet another of her hymns, this time one of revival in multiple meanings. Her joy is so infectious that numerous audience members at first tentatively and then fearlessly sing along with her. Amazingly, this does not collapse the fourth wall. The problem, as the New York Times’ review noted, is Tyson/Wilson seem encouraged by the audience to do an encore, and their acquiescence banishes the illusion of watching reality for the first and only time in the play in what seems to be milking applause.

Tyson’s performance is worth the price of admission. In the opening scenes, Tyson’s Carrie gives off the aura of marking time until she slips into oblivion. The audience’s heart is a goner when she asks her son and prays to her God, “I want to go home.” But this is the turning point. That seemingly slight and frail body cloaks a banked rebellion in her soul, and when she runs away on a quixotic odyssey, Tyson flowers in front of us. By the finale, Tyson has credibly charted a resurrection worthy of a sunrise.

All but one member of the cast are solid, from the still gorgeous Vanessa Williams courageously playing Carrie’s overbearing self-involved daughter-in-law, to Condola Rashad as a dewy bride whose husband has been sent to Korea, and Tom Wopat as a sympathetic sheriff. Pat Bowie, who just played Mama in Palm Beach Dramaworks’ A Raisin in the Sun is in the ensemble and understudies Tyson.

The jarring note is Cuba Gooding Jr. in what his Playbill bio tells us is his professional stage debut. Trust me, you didn’t need to tell us. Gooding is a Oscar-winning film actor, but celebrity casting was a mistake here and an unnecessary economic decision given the drawing power of his castmates. First, either he has lost his voice or he doesn’t know how to use it on stage. His character is soft-spoken and a bit woebegone and there’s a little bit of adorableness in his being trapped between two women he loves. But the dishrag he plays here comes straight from a sitcom and his lack of fire that slows down the first act.

On the technical side, set designer Jeff Cowie beautifully infuses the Houston scenes with an Eisenhower Era shabbiness, then the bus station in Harrison, Texas, has the dustiness of a town that never recovered from the Great Depression, and finally a gloriously elegiac homestead in which the eternal glory of Nature is emphasized by the dilapidated wreck of a deserted farmhouse. All of this is helped immeasurably by the subtle but evocative lighting of Rui Rita, and original music by John Gromada.

Runs through Sept. 1 at the Stephen Sondheim Theatre.