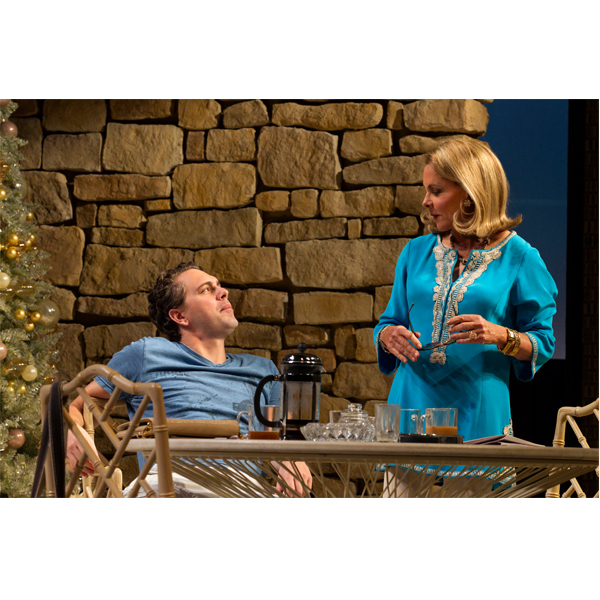 Critics overuse the word “stunning” in reviews. Even well-travelled connoisseurs have only been stunned by a piece of art a couple of dozen times in their lives. Stunned is when your brain’s synapses have been so overwhelmed that you have trouble getting out of your seat.

I’m not sure the current Broadway remounting of Lincoln Center ’s production of its 2010-2011 Other Desert Cities is one of those times, but its thespian aerialist act high above your heads comes as close as you’re likely to see for a while.

Actors Playhouse in Coral Gables plans to produce the show next January and if they hadn’t done such a first-rate job with August: Osage County in 2011, you’d wonder if they have a chance of mastering this multi-layered play that was a finalist for the Pulitzer Prize and has been nominated for five Tony Awards including best play.

Playwright Jon Robin Baitz takes that staple, the dysfunctional family drama, and amps up the thematic value by linking the group’s shortcomings to the social-political landscape of the past few decades. With a scientist’s observation and a cleric’s compassion, Baitz dissects the same elements of ethics, truth, family and loyalty as Arthur Miller did in All My Sons.

The treacherously craggy and deep emotional sea trenches are navigated so expertly and nimbly by director Joe Mantello and a superb cast that you question how anyone else can hope to equal it.

This current troupe, mostly holdovers from the off-Broadway run, have been in previews and performances for this edition since October. That the show can be this fresh come late spring says something about their professionalism and craft. Deep into its run, the audience benefits from the actors having had time to excavate all the meanings and discover all the techniques to put them across.

The story is set in the elegantly tasteful living room of an expensive ultra-modern home in Palm Springs, California, the ultimate enclave of the one-percent.

This is the 2004 Christmas gathering of the Wyeth clan, a wealthy Republican family headed by Lyman, an actor-turned-ambassador (Stacy Keach), and his wife Polly, a screenwriter turned socialite (Tony-nominated Stockard Channing). Coming from humbler origins, they have eagerly paid a price to live in the top tier of The American Dream, becoming intimates of such people as Nancy Reagan. The war in Iraq isn’t going well and the world is gripped by fear of terrorism, but the Wyeths are iconic poster children for an Establishment who eagerly drank the Kool Aid. But don’t dismiss them lightly: There is steel and intelligence under the angora.

Also staying in the house for an indeterminate period is Polly’s acerbic sister Silda (currently played by Tony-nominated Judith Light, but played by Linda Lavin in an earlier incarnation). As liberal as her sister is conservative, she has been wrung out by her battle as a recovering alcoholic. She has sins of her own to atone for, but she provides the outsider’s commentary in such lines as “Palm Springs isn’t a refuge; it’s King Tut’s tomb.”

Visiting, too, is the hip young son Trip, a reality TV show writer (we saw Matthew Risch, but the role’s originator Thomas Sadoski is back in the part now).

And finally, the linchpin: the return of the prodigal daughter Brooke (currently played by the role’s first occupant off-Broadway, the well-named Elizabeth Marvel, who replaces the woman who opened the show on Broadway, Rachel Griffiths).

Brooke is a one-book novelist who had a nervous breakdown and has led a somewhat Bohemian life in the wake of a family tragedy involving a deceased son. Like the rest of the family, she has weathered tough times emotionally and psychologically. But she has come out the other side with a weary but amiable false front to show the world.

She has come home to announce she has finished a book loosely based on a family tragedy and scandal. Well, not so much a novel, as a purgative memoir that will expose such skeletons as how her parents’ emotional coolness and inflexible politics drove the other son to suicide after he was implicated in a radical bombing. She wants, sort of, her family’s blessing for a tell-all confessional, something they can hardly imagine is being requested let alone expected.

More secrets emerge in the ensuing struggle of combatants who know each other’s vulnerable spots, including at least one surprise that turns the play inside out – and thereby reveals another layer of themes, which to discuss would likely constitute a spoiler.

Overall, the key values being examined in painfully clear-eyed detail are ethics, truth, family and loyalty – many of the same elements dissected in Arthur Miller’s All My Sons.  Several times, someone or other says with complete sincerity, “I love you, but….”

In that, the work echoes a half-dozen other plays about dysfunctional families including Long Day’s Journey Into Night and A Delicate Balance. But Other Desert Cities is, in fact, its own creature, both a political and relationship play. Among many other virtues, it connects human flaws that make for family discord to those that create an ethically-challenged Establishment responsible for recent wars and the economic meltdown.

Did I mention this is a terribly funny play? Some of the humor comes from the witty zingers that this articulate, literate and creative quintet can sling as if they were 21st Century residents of a Noel Coward comedy. And a good deal of laughter also comes from Baitz’s well-observed insights into the abrasive friction of people who know each other all too well.

Mantello’s ensemble is in perfect sync with Baitz’s script. Channing gives a brittle topspin to her judgmental quips that exposes Polly’s underused intelligence. Marvel’s rueful observations come with a frozen smile that really signifies the sad expectation that nothing will ever go right for Brooke, certainly not this weekend.

Light, a well-known TV actress who has been proving for years that she has enviable theater chops, transforms herself into this self-destructive sister who has nowhere else to hide but the bosom of this family. Doubtless, Lavin was fine in the role, but Light need take a backseat to no one.

Keach, another actor whose sterling stage credits are often forgotten by audiences, exudes a solid and dependable exterior that Lyman struggles to maintain, the very symbol of his achievements. But he, too, is at first baffled and then shattered by Brooke’s seeming intransigence about the collision of fidelity to artistic truth versus loyalty to the family’s well-being.

A nod is due Tony-nominated John Lee Beatty for his send up of the upscale abode, all white and cream walls and furniture, a stylish but freakishly artificial Christmas tree, rock walls and a trendy fireplace funnel hanging from the ceiling.

This is one show to be hotly anticipated in South Florida next season, but if you can catch in New York, don’t pass it up.

2 Responses to Report From New York: Visit “Other Desert Cities”