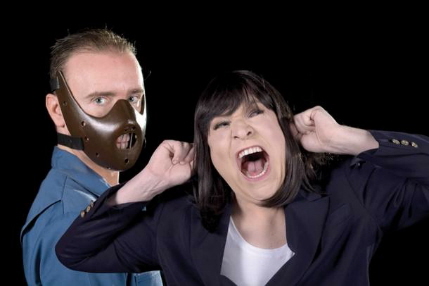 To know whether you will want to see The Silence of the Clams, the silly spoof at Empire Stage, all you need to know is the title refers not to seafood, but to oral sex on anatomy specific to women.

Jamie Morris’ script takes iconic moments and lines from the Jonathan Demme movie and douses them in cobalt blue sledgehammer-subtle humor. FBI boss Jack Crawford warns agent-in-training Clarice Startling (yes, Startling) about her upcoming interview with serial killer Hannibal Lickter: “Believe me, you don’t want Lickter inside you!” Then he repeats the line as if you didn’t get the double entendre, knowing damn well that you did the first time. He just likes saying it and figures you’ll like hearing it again.

Obviously, it has none of the admirable aspirations of Kutumba Theatre Project’s Baby GirL or Island City Stage’s Twentieth Century Way. Think more like  Animal House.

Morris has written a catalog of gay riffs on pop culture staples including two produced last season at Empire Stage, Mommie Queerest and The Facts Of Life: The Lost Episode. Like them, Clams features an all-male cast of three actors playing a dozen roles of varying sexes and sexualities.

The plot actually mirrors the film pretty closely. It follows fledgling trainee Startling (Brooks Braselman in a black bobbed wig and severe blue business suit) as she tries to get Lickter (an elegantly creepy Morris with piercing blue eyes) to help the FBI catch the serial-killer-du-jour Beaver Bob (Morris again) who has kidnapped a new victim (Braselman again) with the help and interference of various characters played by Charles Logan.

All have played in Morris’ shows before and are directed by another Morris vet, Christopher Kenney.

Reveling in its low, low, low budget, the production has almost no scenery and the simplest of costumes. But Morris and Kenny have created slide projections to set the locales. The play opens with a video echoing the film’s credit sequence of Clarice working out on the FBI training trail — except this time her labored jogging, clumsy calisthenics and faux pulls ups are interspersed with a field day sack race and a pie eating contest.

Morris and company have intermittently toured this show but Morris personalized this production for this community. Wilton Manors is referenced frequently, some local gay residents’ names are inserted and among the slides is a shot of a well-known Broward County gay club.

Perhaps it wouldn’t be a gay comedy if someone didn’t take off their clothes for some gratuitous titillation. Indeed, there are two flashes of full frontal nudity here, but it’s justifiably in service of a very funny riff on a key scene from the movie.

The script is slathered in current references from Duck Dynasty to Here Come Honey Boo Boo to the debate whether to bomb Syria. When the psychiatrist wants to torture Lickter, he plays videos of Miley Cyrus’ Hannah Montana television show.

Truth is that about the 28th or 29th time the script resorted to an oral sex joke, the show began to drag a bit, no pun intended. But the three actors threw themselves into it with such gleeful abandon that their enthusiasm was infectious enough to carry the audience through the evening.

It might seem pointless to assess the acting and directing, but in fact these folks have such a comfortable familiarity with the script and each other that there is a surprising sense of skill and smoothness to the production.

Braselman especially dives deep into this nonsense with the total uninhibitedness of a clown gleefully mugging to the audience. He has nailed that weird West Virginia accent that Jodie Foster affected for the film, down to the twang and the cadence.

Clams makes no claim to be anything but what it is, but if you’re in the mood for mindless silliness, this will divert you for much of its 70-minute run.

One Response to REVIEW: Empire Stage’s Silence Of The Clams Is Silly Sex Spoof