Ride Is Worth The Journey At Miami’s Area Stage Company 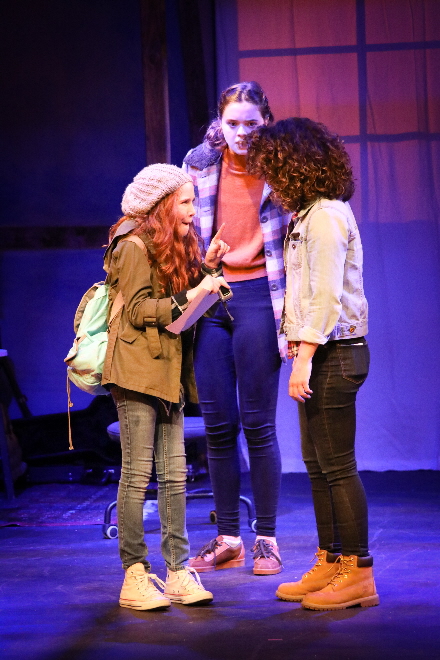 Playwright Eric Lane gives little to no direction for the setting in his play Ride.  “Setting: Various locations, suggested as simply as possible. Set pieces and props are not meant to be literal . . . the scene changes and staging should be fluid.”

Had you not known this and watched the imaginatively drawn setting by Giancarlo Rodaz, who not only directed the piece, but created the sets and lights, for Area Stage Company’s Ride, you’d be mesmerized. But knowing this bit of notation from the script makes the ingeniousness of how this piece is crafted, well, all the more delightful.

The play opens at Big Bob’s local produce stand in New Jersey. Two girls, Carrie (Abigail Baldwin) and Molly (Jackeline Gonzalez) work there, part time. Carrie has just graduated high school; Molly is a senior. Right off the bat, you can tell that these two would never hang out in high school. Carrie would have been the bookish one, Molly part of the rebellious crowd.

Molly’s life is full of entitlement, which she resents, although is quick to take advantage of it, while Carrie has been put in the role of surrogate Mom to her precocious 11 year old sister, Sam, since her father died and her mother has no time for either girl.

The two work at the farm stand for different reasons. Carrie is saving money for college, while Molly’s parents want her to work to learn how to make money, but the extra cash from here part-time job goes for her own pleasures, clothes, make-up, going out.

At the top of the play, Carrie stares off into the distance. She’s ogling Molly’s shiny new car. Carrie, whose father died years ago. is a bit envious.  She goes on and on about the car. She she sizes it up and down: “Red with this black stripe that’s so . . . ,” she practically drools. When Molly’s contempt for the car becomes apparent, Carrie backs off. Molly tells her a story about why Dear Old Dad bought her the car in the first place, and she’s less than tickled.

But the car ends up being the vehicle for the girls to take an impulsive road trip together, and in the course of the play, each will have a different reason for why Ride changes their life.

It’s difficult to get earnest acting from younger, up-and-coming actors, but Rodaz definitely has found a way to get the women to dig deep into their young psyches and pluck out some very deep emotions. Lane’s play forces the prodding, and, the gut instincts have to be honed, so that they come out true. All the actresses have a difficult road, but they navigate it so well. Even spurting vulgarities that can come off a bit shocking doesn’t seem to rattle them, even though some of the audience members were taken aback with the story that Molly tells shortly after the opening of the first act. She’s making up a story about a new reality show called F-this. And it’s a bit graphic, and a bit crude. Yes, throughout, there are more than a few f words thrown about. But isn’t that the way teens speak?

Gonzalez as Molly is the professional among the three. Her bio notes say she earned her BFA in acting from Point Park University’s Conservatory of Performing Arts in Pittsburgh. She’s the one who has to be the rebel and tell the graphic story, and she has to also have the audience try to like her character, even though there’s a lot about Molly that, frankly, isn’t redeemable. So, by the end of Ride when it’s time for her redemption, Gonzalez has made her so likeable, you do want to cheer her on. Co-star Abigail Baldwin, an eleventh grader at Miami’s Robert Morgan Educational Center holds her own. In fact, she’s the stand out as the good girl who grows tired of playing it safe, and relates, in broken fourth wall soliloquies a fascination with Anne Frank’s story. Baldwin makes you question if her Carrie feels as trapped as the girl hidden in the attic apartment? And isn’t everyone hiding in some way or another, the play (and Baldwin) make you think.

The role of the kid sister Sam is shared by two actresses, Thea Barraque and Kate Markus. This particular evening Markus played the role. As the annoyingly smart kid sister, Markus’s Sam is a whirling ball of high energy, and perfectly precocious. She rattles off product safety recalls “because there’s danger everywhere.” When her sister is late picking up Sam from after school, she says with just the right amount of sass: “I could’ve been abducted, you know. It happens. Just turn on the news or the back of those milk cartons.” Toward the end of the show when her character realizes she’s beginning to have to face the realities of growing up, Markus knows how to give just enough to the audience to make them realize that’s true. This is the role that gets the most laughs, and Markus delights in each of them.

Ride is a difficult play. Lane expects his characters to have a lot of rollercoaster emotions with little window dressing in this coming of age story, but Rodaz finds a way to make the sparseness of the surroundings be the perfect place for a character study.

Rodaz’s set is built to mimic a friend’s basement that you’d hang out at in high school. It’s amazingly creative. Set pieces are limited, and there are office chairs that spin around and a bench that fills in for the car. An opening projection counts down the years from Present – 2018 all the way down to when the play is set – 2005. Adding to the artistic palette is Giorgio Volpe who sits on a white leather couch at the rear of the set, playing electric guitar, and underscoring this ride with original music. They should sell his soundtrack in the lobby, really.
Ride at Area Stage Company is like life itself. It’s not about the destination. It’s about the journey.