Rigoletto Has Much To Admire, But Won’t Make You Weep 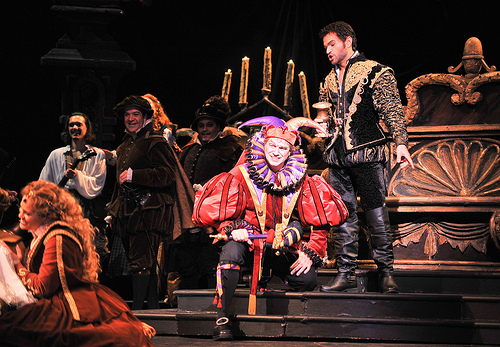 Rigoletto is the third Florida Grand Opera production this season with much to admire, even a few moments of technical artistry that you can describe as thrilling. But it’s admiration from a distance, more intellectual appreciation than emotionally touching.

The respiration-stopping moment occurred when Nadine Sierra as the title character’s daughter lies on her back to wax romantically about her new-found love in the aria “Caro nome.” Her trilling up and down the scale gently exhaled notes into the air above her as if she was playfully keeping a feather aloft above her with her very breath.

But the only scene to truly touch the audience was the very first one of the evening, a wordless epilogue presented out of order to prefigure what’s to come. As the orchestra plays, a lonely shaft of light catches Rigoletto crumpled and crushed by an unendurable tragedy of his own making. He removes his dark cloak to reveal a bare upper torso, including a huge hump whose existence carries multiple thematic resonances.

Otherwise, this handsome and lush production is a perfectly competent no-asterisks edition of Giuseppe Verdi’s masterpiece about how blowback from venality and revenge has tragic repercussions.

Under director Jeffrey Marc Buchman and conductor Andrew Bisantz, this edition seems to underscore the duality, deception and hypocrisy in Francisco Maria Piave’s libretto adapted from a Victor Hugo play. The ultra-libertine Duke of Mantua (a buff club-hopping hunk played by Michael Fabiano) croons a gorgeous, lyrical love song to his unsuspecting prey, Gilda (Sierra) in “E il sol dell’anima,” but we know he does not mean single rose-scented word.

Gilda’s father, Rigoletto (Mark Walters), the duke’s hunchback jester, is a murderously duplicitous schemer akin to Iago and Richard III who hides his anger and resentment behind a false front of bonhomie. In one scene, he pulls back the front of his multi-colored jester’s motley to reveal a starker black and white attire that reflects his true nature.

Even Gilda’s aforementioned aria rhapsodizing about her lover’s name Gualtier is based on a lie: He’s the Duke in disguise, bent on another conquest.

It’s a dark vision in which the pure are violated and die, the most venal are satiated and go unpunished. Where else can you see an antediluvian attitude in which kidnapping and raping women is considered a gentlemen’s gay ol’ sport?

Sierra, a lovely dewy-eyed Floridian, makes a memorable FGO debut with a purity of tone that echoed her character’s persona. She not only demonstrated a technical command, but also an ability to project to the back of the hall, even when she faced away from the audience.

Fabiano, convincing as the blithely immoral sex machine, brings a licentious virility to the Duke, especially in Rigoletto’s “greatest hit,” the catchy “La donna e mobile,” a light-hearted dismissal of all womanhood as worthy of being used.

Walters has the appropriately sonorous baritone and he works very hard to portray the anguish of this deeply flawed human being, but he never reaches the audience’s heart.

Bisantz deftly leads the solid orchestra through Verdi’s multi-colored score and weaves the varying moods of rage, ecstasy, bluster and woe into a cohesive whole.

Special credit is due Jeff Davis’ lighting of the sumptuous Italianate settings from the Cincinnati Opera — gloriously moody, creating a sense of foreboding.