Rites of Passage Pass Very Rapidly In Stage Door’s The Bris, The Bar Mitzvah And Beyond 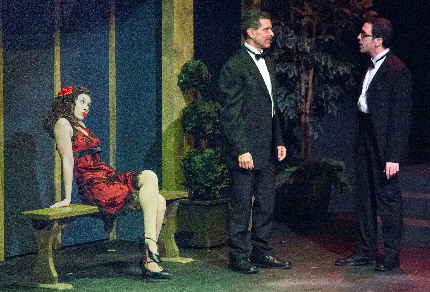 Emily Freeman as an imaginary Lori watches father Gary (Ben Prayz) try to coach son Max (Jonathan Brett) on how to make an impression in Broward Stage Door’s The Bris, The Bar Mitzvah and Beyond

In theater, timing is… everything. Or in the case of Broward Stage Door’s The Bris, The Bar Mitzvah and Beyond, timingisevrythn.

But for almost all of the first act and a good portion of the second, the dialogue, jokes and ideas race by in a blur like a freight train running a half-hour behind schedule. Jokes have no time to land before they run right into the next one, and the cornucopia of philosophical and familial concepts is difficult to absorb and weigh. It would take some of the best comic actors living to negotiate these lines at this speed (You can hear what Allen would have done with these lines).

This cannot be an accident; director Randy Brenner, who helped Bernstein reshape his script, must have dictated this or allowed it to occur. Maybe he did not trust the script. Indeed, it alternates genuinely droll witticisms with hoary old chestnuts that would sound flat if Brenner had let anyone slow down. The pace does slow a bit in the second act, but by then some of us in the audience Wednesday were working hard to meet the play halfway.

Bernstein’s premise and its execution, in fact, echoes one of those late 1960s comedies with a message, plus a seasoning of sex-based humor. Some of Stage Door’s regulars love that kind of material.

The lights come up on a room in a temple as the music plays, “The First Cut Is The Deepest.” Gary, a Brooklyn attorney (Ben Prayz), is assuring Max, his infant son in arms, that his imminent bris is no big deal. Suddenly, he hears Max kvetching to him. Soon after, the boy’s spirit appears dressed in black (Jonathan Brett). Oy! The two banter about Max’s understandable anxiety about the procedure. The father, a loving but traditional soul, confirms that it’s what God insists upon, which only leads the nervous twitchy Max to question the wisdom of God.

The lines come fast and furious: “So you are allowing Lazar Wolf to cut on my privates?” Gary says maybe they’ll give the infant some wine. “Wine? I want morphine. I want Demerol!” Gary cites Abraham’s willingness to perform the bris on himself. Max exclaims, “Don’t you think Abraham was a few Jews short of a minion?”

The time advances to Max’s bar mitzvah where the socially inept nerd is rejected for a dance by the Jewish American Princess Lori (Emily Freeman). Gary counsels Max by replaying the interaction several times, changing the boy’s repartee with varying results. Gary is a classic conservative middle-class American who sacrificed his dreams of a fulfilling career for a secure profession. Amid scores of rim-shot jokes, the conflict of the two becomes clearer. The father-son strife is tough and unsparing and would work better if it wasn’t racing by. Max says something like “You had me (so you could) feel like there was someone you knew more than.”

Fast forward a few years to Max and Lori’s wedding day. Max, who is riven with needless neurotic doubts about himself and his intended, wants to become an actor. But Gary argues that he should stay in medical school to provide financial security for the family that the couple want to raise. The father-son dispute ratchets up until Lori enters and seemingly rescues the relationship — until Gary capsizes it at the last minute.

Zip forward a couple of years to Gary’s funeral after a sky-diving accident occurring during a mid-life crisis. In one of the cuter conceits, now Gary appears as a voice in Max’s head. Then, he too, appears in person to try to work out their issues.

The best actor on the stage is Freeman who is adept enough at comedy; she sings a vampy parody “Whatever Lori Wants” from Damn Yankees. But Freeman takes her time to react to the dialogue and to give shadings in her line readings that communicate a three-dimensional character in a show that barely exceeds two dimensions. She’s acting in a different production and that’s not a bad thing.

The earnest Prayz has been acting in area theaters for years, but he lacks the superb virtuoso skills needed to give any intonation, nuances or rhythms to the whitewater rapids of his lines. We’ve seen him do better; this came across as amateurish.

Brett, too, has talent and passion, but he cannot pull much more out of this sitcom.

The play was mounted in a different form at the former Public Theater in Fort Lauderdale that Bernstein managed. The script has been significantly reworked with Brenner, said Stage Door producer Dee Wilson Bunn, and Bernstein refers to this as the “full-fledged play,”

Michael McClain’s simple but elegant set represents various rooms in a temple as the characters prepare for the pre-bris, a bar mitzvah, a wedding and a funeral.

The production is not terrible by any means. The audience Wednesday afternoon chuckled frequently. But the offering needs retooling to meet its potential.

The Bris, The Bar Mitzvah and Beyond plays through March 26 at the Broward Stage Door Theatre, 8036 W. Sample Road, Margate. Performances are 8 p.m. Friday-Saturday; 2 p.m. Wednesday, Saturday and Sunday. Running time is 1 hour 40 minutes with one intermission. Tickets are $38 – $42 with $16 student tickets. Call 954-344-7765 or visit www.stagedoortheatre.com.

One Response to Rites of Passage Pass Very Rapidly In Stage Door’s The Bris, The Bar Mitzvah And Beyond