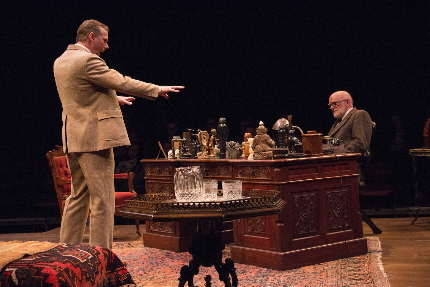 Mr. St. Germain, an award-winning playwright, devises the notion that three weeks before his death, famed psychoanalyst Sigmund Freud met with Oxford University scholar C.S. Lewis, an avowed Christian and author of The Chronicles of Narnia. The two quickly launch into a discussion about God, irony, war, sexuality, literature and all points in between…even the humor of flatulence.

The long one-act play is set in Freud’s study in Hampstead, a northern suburb of London, on the day England declares war on Germany (Sept. 3, 1939). Rallying speeches are heard on the radio and overhead come the rafter-shaking sounds of large war planes. The ominous sounds compress the men’s conversation into moments laden with intellect and urgency. Accelerating it even further is the fact that Freud, who is suffering from oral cancer, has sudden fits of coughing and intense pain.

While Freud regards religion as being filled with fantasy about a cruel god, he has nevertheless asked Lewis to visit him to talk about faith. We wonder, does Freud want to be suddenly converted into a believer or does he want confirmation that he has been right all his life? It is sticky question, and one that will stay with you as you watch this fascinating play unfold and as you experience two expertly drawn portrayals of men so different in their philosophy but so alike in their human hearts.

The conversation turns briefly to “Paradise Lost,” John Milton’s epic biblical poem. Freud says “Milton gives Satan the best poetry.” Lewis brings up J.R.R. Tolkien, a devout Catholic; but Freud again argues and dismisses the famed author of The Hobbit as being a writer of “myths and fantasies.” Suddenly, an air raid siren sounds and the two reach for gas masks and consider evacuating to a nearby basement, in a church, no less.

“The wish that God doesn’t exist can be just as powerful as the belief he does,” Lewis says. “I’d even say choosing to disbelieve may be stronger evidence for his existence, since you have to be aware of what you’re denying.”

Steve Brady so embodies the role of Freud that you may feel compelled to launch into conversation with him, or rush to his side to help. As he did last season in his outstanding portrayal of Lionel in Bakersfield Mist at the Orlando Shakespeare Theatre, Mr. Brady brings multiple layers to his performance, creating a whole human being whipped up by a clash of intellect and passion. He has that grace of a fine actor who allows time and silence to sink into the more powerful moments. That skill is shown exquisitely in the beat where Freud asks Lewis a provocative question, and, while waiting for an answer, simply rocks back in his chair, nagging it to squeak and squeak for what feels like a painful eternity.

David Schmittou is a divine C.S. Lewis who we like immediately upon his arriving in Freud’s study. His Lewis is a warm-blooded intellect, friendly and caring. But he is also modest and goes for the understated emotion when recalling the horrible moment when an Army buddy is killed in World War I. Just as his character is a good sparring partner for Freud, Mr. Schmittou goes toe to toe with Mr. Brady, creating one of those rare theater experiences where you see two wonderful actors bringing to vivid life two intriguing characters.

Near the beginning of the play, Freud tells an ironic joke that begins “Two Jews meet in a train station.” It’s too laden with esoteric cultural humor and intellect to make Lewis laugh; but in the end, it’s as if Freud and Lewis are those two on the train, each taking a different route, but getting off at the same place.

Driving this experience even deeper is director/designer Allen D. Cornell, who places the production in the round. We are so close to the characters and the action that we feel we are a part of it. We hear these men breathe, feel the texture of their suits, sense the warmth of their very presence, and, in all, experience the play rather than simply observe it. Moreover, Mr. Cornell’s blocking, like his sumptuous but clean scenic design, puts as much emphasis on the empty space as that filled by character or scenic props, an aesthetic which is fueled by Freud’s line: “I always consider what people tell me less important than what they cannot.” Freud’s desk is rich with artifacts of Greek, Italian and Egyptian gods and goddesses, an irony not lost on C.S. Lewis. A bonsai tree stands at one end, suggesting polished control. A couch is further laminated with Persian rugs — an even deeper layering of rational, balanced culture.

Anna Hillery’s costumes are perfect from head to toe, not only for the time but the character — Freud wears heavy brown while Lewis wears lighter tan. Sarah Elliot’s lighting design is effective as it slowly diminishes in brightness, an ominous suggestion of both Freud’s impending death and the world being lost to war. And Josh Schacht’s sound design is wonderful, bringing powerful moments beginning with music filling the black box theater and then transferring to the stage prop radio, which brings us immediately into the blood and sinew of the play.

“Things are simple only when you choose not to examine them,” Freud says. Here, you open the door to examining your own beliefs, and to having that rare treat of experiencing two fine performances in a well-crafted play with thoughtful dialogue. Add to that rich production values and you get a show that any theater lover should see.