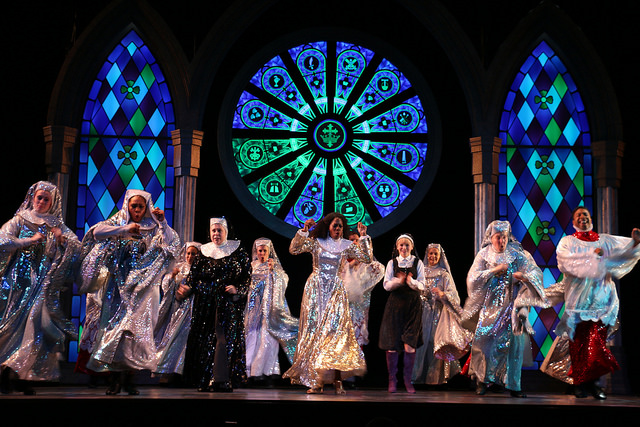 A holy moment in Sister Act at the Riverside Theatre

When a theatrical production’s scenery, lighting and costumes get as much attention as the characters, chances are the story is a bit slim. You see that clearly with Riverside Theatre’s eye-popping Sister Act, a co-production with the venerable Walnut Street Theatre of Philadelphia.

Stained glass windows lining a false proscenium pulsate with color to the disco beat. Nuns in gold and silver lame sparkle in the finale. And gorgeous gothic arches move like a well-oiled chorus line. In front of it all is a talented cast led by the most appealing Dan’yelle Williamson, who lets loose with some hand clapping, Z-snapping, Donna Summer-inspired tunes.

Although it looks like one, the setting is not a casino in Las Vegas. It’s a Catholic church in 1970s Philadelphia, which has turned into a safe-house for nightclub singer Deloris Van Cartier (Ms. Williamson) who saw a murder committed by her hoodlum boyfriend, Curtis (Philip Michael Baskerville). Ensconced in the convent, she befriends a sisterhood of nuns and leads them in song, which in turn saves the church.

Add some shenanigans and some funny quips and that’s about it as far as story line; that approach is typical for star vehicles depending on star power to propel a story. Indeed, Sister Act was just that in 1992 when the movie came out starring Whoopi Goldberg (it was reportedly written for Bette Midler who turned it down). Ms. Goldberg eventually became one of the producers of the 2011 stage musical, which has book by Bill and Cheri Steinkellner (long careers in TV sit-coms and improv comedy).

The music is by Alan Menken and lyrics by Glenn Slater, who also teamed up on
Disney’s The Little Mermaid. You’ll think of that when you hear the young postulant’s song, “The Life I Never Led,” a stand-out solo sung with sweet power by Laura Giknis. It sounds very much like Ariel the mermaid’s lament in “Part of Your World.” Same theme. Same sound.

While Sister Act takes a few minutes to gather steam, it eventually moves lightning fast and with high energy. Yes, there are a couple of unnecessary songs which become speed bumps to the momentum, but before you can check your watch, the next upbeat scene pops up.

Director/choreographer Richard Stafford bedazzles this show with big numbers and funny gags. His “Lady in the Long Black Dress” brings in laughs galore as he gets a trio of hoodlums (Justin Keyes, Tony Castellanos and Fran Prisco) to think they can Barry White a nun out of her habit.

Kent Overshown is adorable as “Sweaty” Eddy, the cop who has had a crush on Deloris since high school. He lets out with some good vocals in “I Could Be That Guy,” when he dreams of being something different.

Other standouts include Ron Wisniski as huggable Monsignor O’Hara and Mary Martello as Mother Superior.

Madeleine Doherty finds the non-verbal humor in decrepit Sister Mary Theresa (she was also “Hold Me Touch Me” in the original Broadway cast of The Producers) Diane Findlay is an energetic hoot as irascible Sister Mary Lazarus. Melissa Joy Hart is fun as goofy Sister Mary Patrick.

And, as Deloris Van Cartier, Dan’yelle Williamson holds the audience in the palm of her hand when she belts out her musical numbers, especially “Fabulous Baby.”

The design crew also brings the show to vivid life. Gail Baldoni’s costumes will knock your socks off. She keeps building the pizzazz until the finale when she fills the stage to the brim with silver and gold lame, and sequins galore.  Be sure to stay for the curtain call, which has little fun kicker to the show.

The orchestra at Riverside is better than it’s ever been. Led by music director Ken Clifton, it is pitch perfect and loaded with big energy. You’ll be hard pressed to keep those toes still.

For sure, this co-production by Riverside and Walnut Street is gorgeous and filled with talent and big musical entertainment that gets the audience on their feet cheering. Resistance is futile. So sit back and enjoy the dazzle.